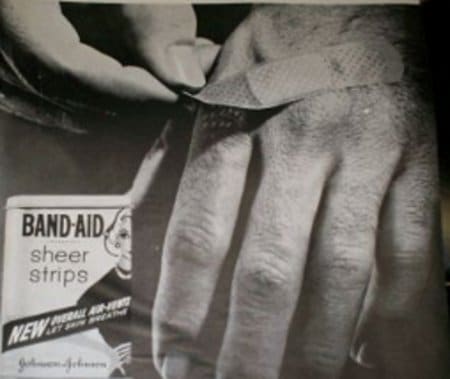 When I was a kid and had a loose tooth, my intimidating grandmother would always ask me if I’d like to have it removed using her patented old school technique. This method involved tying one end of a string to the tooth, the other end to a doorknob, and then slamming the door shut, thus ripping out the tooth with one fell swoop.

As an eight-year-old I found this idea pretty terrifying. Actually, as an adult it still kind of gives me the heebie jeebies. But I understand her reasoning—instead of getting a little dull pain every day for a week from jiggling the tooth around, just get it over with and out of your mouth.

A sharp, momentary pain or a dull, protracted one. Even if you didn’t have a grandmother who wanted to tie a string to your tooth, you can probably identify with this choice when you think back to removing a band-aid from one of your appendages. You could simply rip the thing off, resulting in one big quick OW! Or you could keep lifting the corners a little bit at a time—ow, ow, ow, ow, ow…

Now which method of band-aid removal you favored as a kid won’t have a big effect on your life. But unfortunately, many men grow up to choose the dull, protracted pain approach in making more important life decisions. And taking that approach to life can have a major impact on their success, relationships, and ultimate happiness.

Why ruin a little bit of every day when you can just ruin a big chunk of one of them?

When there’s something that you need to take care of or do, it nags at your mind each day; it’s like constantly walking around with a pebble in your shoe. That nagging feeling plants itself in your cranium and clutters your thoughts, making you cranky, anxious, and depressed. By nature the brain does not like unfinished business and dangling threads…

As I talked about in my post about my battle with “shoulding” on myself, when the blog became so time-consuming that I knew I needed to quit my corporate job, I dragged my feet for awhile on turning in my resignation. My boss had really stuck his neck out in hiring me (his superiors had put a lot of pressure on him to choose an internal candidate), and I had only been on the job for seven months. I didn’t want to leave him in the lurch, and I felt like such a jerk for quitting. I wondered if he’d be upset when I told him, and thinking about having that conversation made me incredibly nervous—even sick to my stomach.

And so for weeks I held on to the great hope of all slow band-aid rippers—that something would happen so that I wouldn’t have to make the decision myself. Maybe I’ll be downsized! Maybe my boss will be promoted and I won’t have to tell him personally! Maybe a meteor will strike the earth and kill us all!

For weeks I couldn’t pull the trigger. And yet I thought about it every day, how I needed to make the decision, how I needed to get the ball rolling. It made me miserable. I was gloomy and short-tempered with those I love.

When I finally quit, my boss was very understanding; this thing that I had built up in my head turned out to be nothing at all. (And isn’t that so often the case?) I realized I had wasted a month of my life with worrying about it.

Nobody can be fully happy if they’re walking around feeling like there’s an axe hanging over their head. Sure, they can go about their day-to-day life, but they can’t fully relax and enjoy that life. They settle for mediocrity; each day isn’t a 3 or a 4 on the aliveness scale, but it isn’t a 9 or 10 either. When you choose to rip off the band aid, you have one day that’s maybe a  2, but then you’re free to enjoy 9 or 10 days from there on out.

It keeps you from progressing with your life.

How many of us know a guy who’s in a long-term relationship with a girl whom he doesn’t love and doesn’t see a future with, but who stays in the relationship anyway because he’s scared to have the break-up conversation with her? He thinks about ending it every day, but he can’t pull the trigger. He could be out dating and finding the love of his life, but instead he’s sitting on the couch watching Grey’s Anatomy with a person he doesn’t really even like anymore.

A constant, dull pain can become such a regular part of our lives that it becomes like a comfortable companion. Getting rid of it can be scary.  But don’t let your annoying unfinished business fool you into thinking you guys are friends—sure you’re attached, but that attachment is as a ball and chain is to an ankle. It’s keeping you from moving on and finding greater success and happiness.

It turns a small problem into a large one.

Many men ignore a problem or a needed decision, hoping they’ll never have to fully deal with it. But in nearly every case, that procrastination only makes the situation much worse than before.

When Steve Jobs was diagnosed with pancreatic cancer, it was at a stage where his chances of survival were very good. But he didn’t want to deal with the reality of his disease and didn’t like the idea of surgery and the “invasion of his body,” so he tried to cure the cancer with diet and alternative remedies. When he realized this approach wasn’t working, he threw all his money into the traditional methods. But the cancer had progressed to the point where it was too late. And the world lost a great visionary.

Case in point number two: the scandal at Penn State. Much ink has been spilt over this terrible situation. But one of the most important lessons we can glean from it was penned by David Brooks: “Pain now is better than pain deferred.”

Coach Paterno and the other university officials could have nipped Sandusky’s reign of terror in the bud by going to the police as the evidence emerged. But they were likely loathe to reveal a dark spot on a program that prided itself on its by the book reputation. So they swept it under the table. And now that the scandal has exploded, the fallout out is far worse than it would have been if they had dealt with the problem promptly. What would have been a blip of a story that got a lot of coverage at first and then went away, has now become a stain that will forever taint Penn State and JoePa’s legacy. Pain now is better than pain deferred.

These kinds of situations don’t just happen to high profile men either, obviously. I know a guy who had an affair, ended it without ever telling his wife, and then hoped to just go on with the marriage like nothing happened. But the wife always had her suspicions, and would ask him about it. And so when she finally discovered the truth years later, the fallout was much worse. She was most hurt to learn of the affair itself, of course, but what damaged the relationship even further was knowing that he had lied to her for years. While they’ve stayed together, this fact has made re-establishing trust even harder in an already difficult situation.

In all of these cases, the men delayed pain in the present, in the hope that they’d never have to deal with it fully down the road. It was a gamble, and yet in the case of Penn State and the philandering husband, even if they gambled and “won”—the secret never came out–they would have been deprived of a man’s most valuable possession—a free and clear conscience.

Bottom line: Whether literally or figuratively, left untreated, a cancer will grow and fester. As soon as you can, you need to wield the knife and cut it out.

If you really don’t want to be a lawyer, and would rather be a musician, then it’s better to tell your folks now, instead of after they plunk down $75k for three years of law school. Ditto for telling your fiancée you’ve changed your mind about getting hitched—tell her now, not on the wedding day. Pain now is better than pain deferred.

Rip Off the Band Aid!

Maybe it’s some serious moral or ethical mistake that you need to confess to someone. Maybe you need to tell your annoying roommate that it’s time to move out. Maybe it’s just that huge stack of paperwork that’s been sitting on your desk for a month waiting to be filed away.

Whatever it is, now that you’ve reached the end of this post, I challenge you to rip off the band aid. And I mean right now. If you can’t take care of it in one fell swoop, then set the wheels in motion—send an email or pick up the phone and set up a meeting. Do something where there’s going to be no backing out and the die has been cast.

What helps give me a push when I’m scared to do something is to look at the clock. I say to myself: It’s 8:00 pm now. The next few hours are going to suck, but they’re a tiny fraction of my whole life. At 8:00 pm tomorrow, it will be finished and over with, and I’ll never have to think about making that decision again.

So go on, tie that tooth to the doorknob and take a big breath.