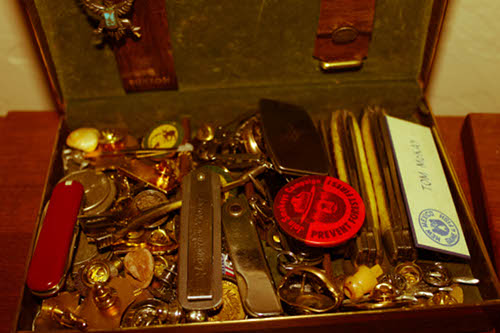 “We used to wait in the library in the evening until we could hear his key rattling in the latch of the front hall, and then rush out to greet him; and we would troop into his room while he was dressing, to stay there as long as we were permitted, eagerly examining anything which came out of his pockets which could be regarded as an attractive novelty. Every child has fixed in his memory various details which strike it as of grave importance. The trinkets he used to keep in a little box on his dressing-table we children always used to speak of as “treasures.” The word, and some of the trinkets themselves, passed on to the next generation. My own children, when small, used to troop into my room while I was dressing, and the gradually accumulating trinkets in the “ditty-box”—the gift of an enlisted man in the navy—always excited rapturous joy.”  – Theodore Roosevelt

Growing up, one item that loomed large in my boyish imagination was a small wooden box my dad kept on top of his dresser. There was nothing really special about the box itself. What made the box an object of fascination was what my dad kept inside it.

The box was the place my dad stored all his little trinkets that he had gathered through the years: pocket knives, cufflinks, class rings, and tie bars are just some of the items he kept in the box. But to me and my brother, my dad’s knickknacks were more than mere trinkets. They were treasures.

It was always a treat when dad would bring his treasure box down from the dresser and let me and my brother explore the items. I was amazed how much stuff he was able to cram into such a small space. Even as a boy, I recognized that my dad’s treasures were pretty darn manly. The box even had the faint manly smell of metal and musk.

I’ve talked to other men who share a similar memory as mine. Just like Theodore Roosevelt, they can remember specific items from their father’s or grandfather’s “treasure box.” 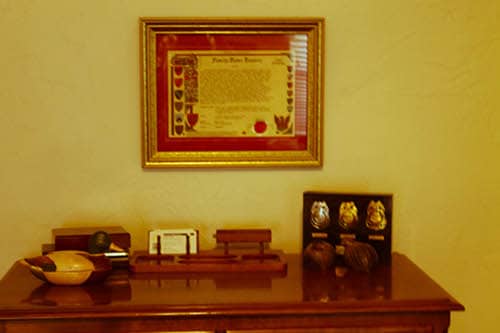 Top of my dad’s dresser. 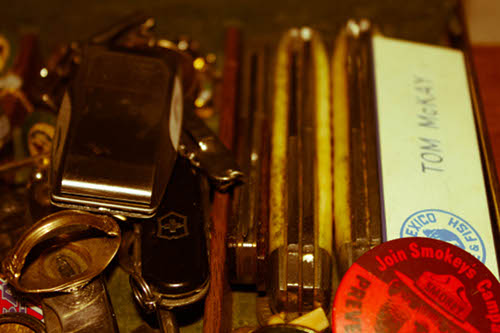 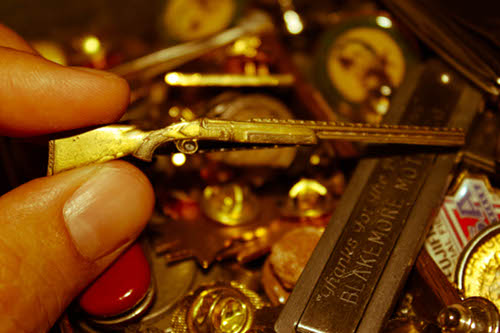 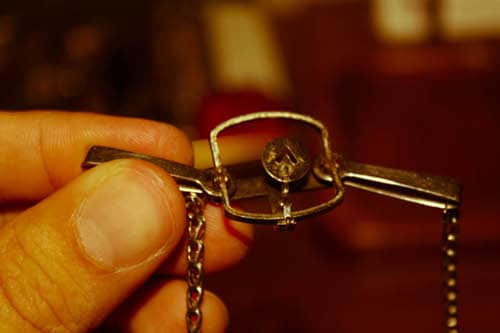 I was obsessed with this tie chain as a kid. It’s a working replica of a foothold trap. You can set it and put your finger on the trigger and it will snap shut. I’ve seen something like this sold in truck stops marketed as “mosquito traps.” I thought it was the coolest thing in the world as a kid. Twenty years later, I still think it’s pretty darn awesome. 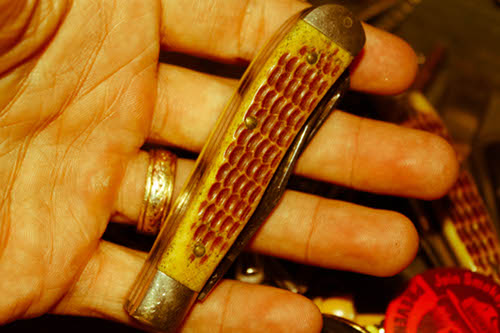 One of many pocket knives in my dad’s treasure box. 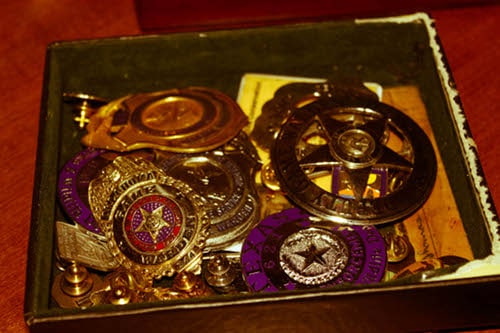 My dad has recently added another box where he says he keeps “the real treasures.” These are all his badges he’s collected over the years in his service to the U.S Fish & Wildlife Service. 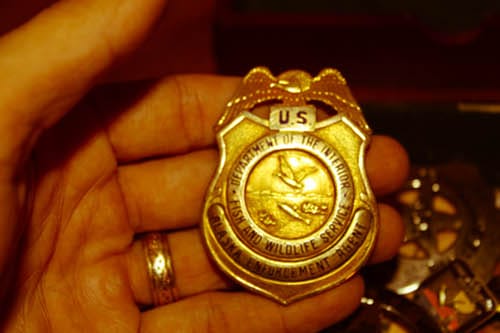 Fish & Wildlife badge when my dad did some work up in Alaska. 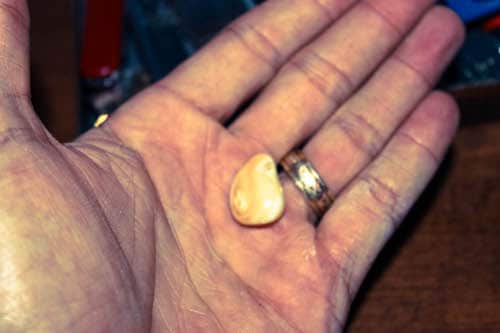 “Your readers who are hunters will know what this is,” my dad said. It’s an elk tooth, also known as elk ivory.

The Guardian of My Dad’s Treasure Box Since 1978: The Ceramic Mallard Soap-On-A-Rope Holder 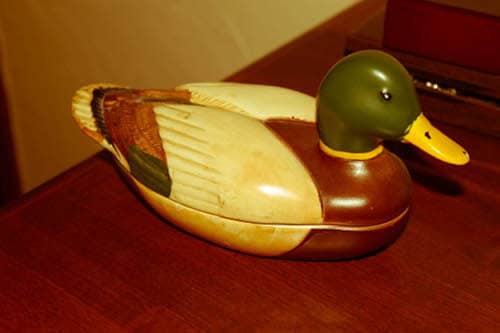 Containing a manly scented soap-on-a-rope, this ceramic mallard has sat atop my dad’s dresser, standing guard over his treasure box since 1978. Avon sold these back in the 70s. I know there’s got to be some older readers who got this awesomely manly soap dish as a Christmas present along with cologne in pheasant-shaped bottles. I always thought it was cool, manly, and distinguished as a kid. I will be fighting my brother over it when we settle my parents’ estate. 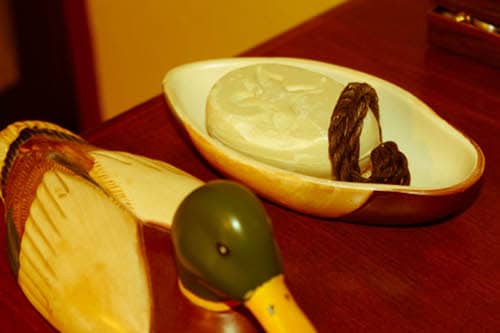 I don’t think my dad ever used the soap. It still smells great. Avon needs to re-issue these bad boys. I think they could sell a boatload of them for Christmas. I’m pretty sure Old Spice got their idea for the  grizzly bear deodorant holder from this duck soap dish. 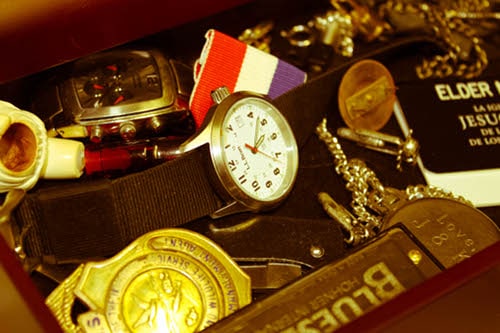 I’ve continued the tradition of keeping some “treasures” above my dresser. My dad gave me some of his treasures, to which I’ve added my own mementos. I’ve had several treasure boxes over the years, including old cigar boxes. Those are great man treasure boxes. Today I keep my trinkets in a wooden valet that I got for Christmas a few years ago. My collection is pretty paltry compared to my dad’s, but to be fair, he’s had a few more decades than me to build up his collection. 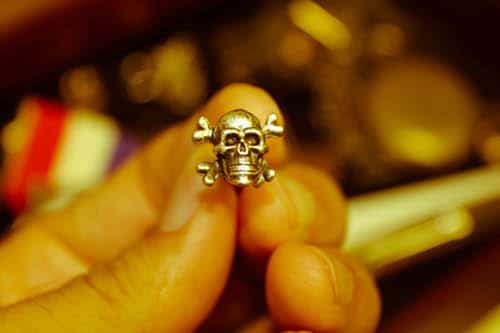 My memento mori cufflinks I wear to my monthly Freemason meetings. 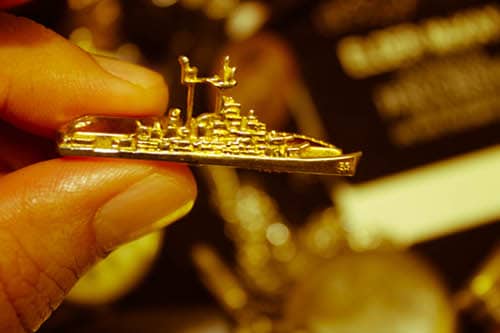 This tie bar belonged to Kate’s grandfather. He passed away a couple of years ago, and Kate’s Nana gave it to me. It’s in the shape of the USS Indiana, the battleship he served on during WWII. 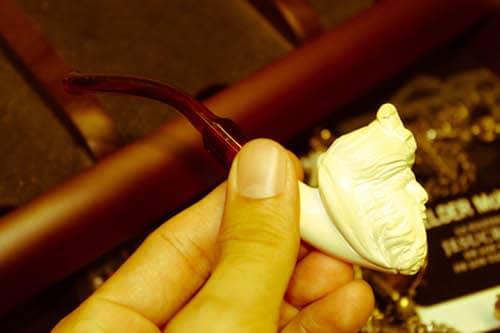 Several of the items in my box are things AoM readers have sent me over the years. Those are some of my favorites. One AoM reader sent me this handsome meerschaum pipe that’s in the shape of a pirate’s head. I don’t smoke, but it will forever hold a place in my box of manly treasures. 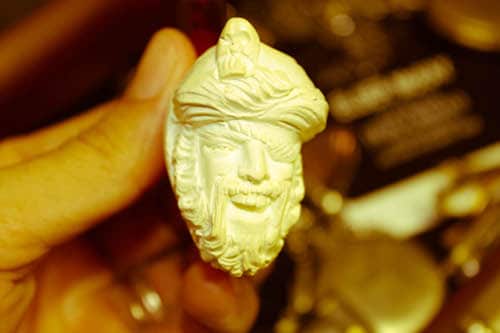 Front of the pirate’s head. 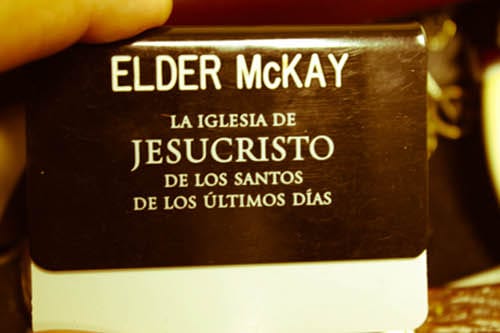 Some of you have probably noticed the  Mormon missionary name tag nestled among my treasures.  I served a Mormon mission when I was 19 in Tijuana, Mexico. My mission was a defining moment in my life and definitely a rite of passage into manliness for me, so the name tag definitely deserves a place in the box. 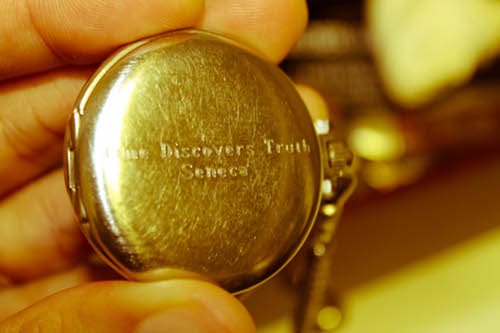 This is a pocket watch that two of my friends from high school gave me before I left for Tijuana. They engraved a quote from Seneca on one side: “Time discovers truth.” On the other side are their initials. 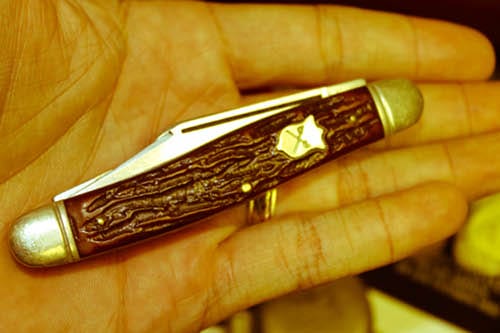 You’ve got to have pocket knives in your box of manly treasures. This one used to be in my dad’s, but now it’s in mine. 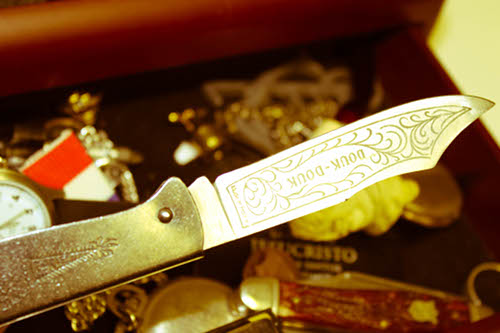 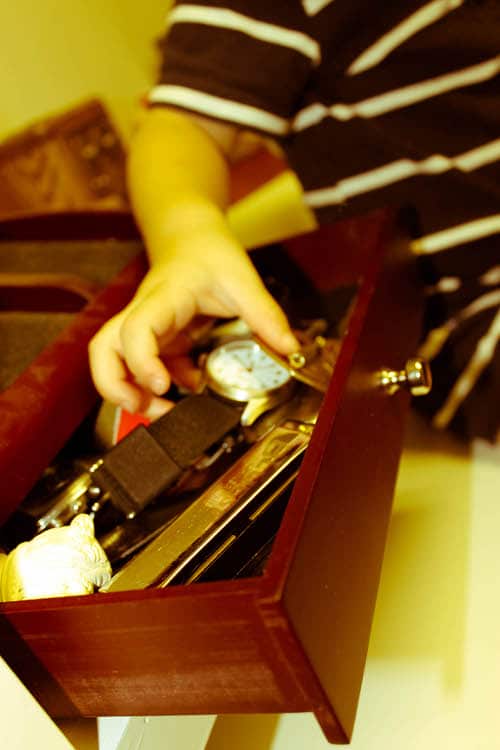 My almost two-year-old Gus is already interested in my treasure box. He likes to sit on top of my dresser and rummage though things. His favorite thing is the harmonica. He still doesn’t have it quite figured out yet. I’m looking forward to when he gets a bit older and I can share the stories behind the items, just like my dad did with me. 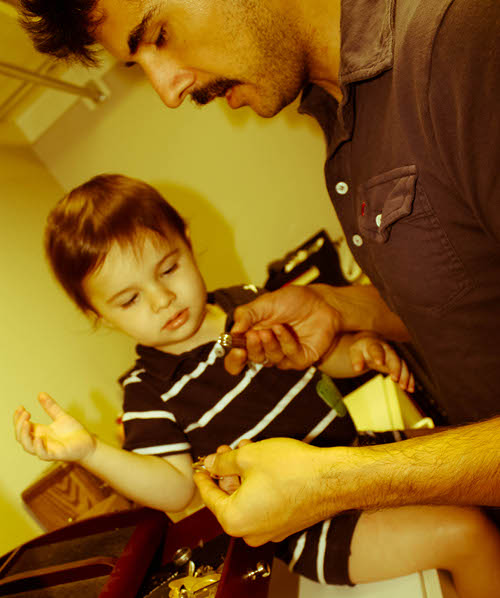 Showing Gus his Pop Pop’s old pocket knife. Just as my dad gave me some of his treasures to start my collection, one day I’ll give Gus some of mine so he can start his.

What’s in Your Treasure Box?


Who else out there has a box on their dresser that contains their manly “treasures?” What do you have in your box? Share with us in the comments.

Better yet, share a picture of your treasures with us. Take a picture of them and upload it to the AoM Community, or you can use Instagram and tag them with with @artofmanliness and #manlytreasures. I’m looking forward to learning about your man treasures!

If you don’t have a ditty-box for your manly treasures, start one today. It’s a great way to store your memories as well as those small assortments you use on a regular basis like tie bars and watches. It doesn’t have to be very fancy. Old cigar boxes are great for holding man treasures. (If you’re looking for a cigar box, pick up The Art of Manliness Collection. It’s both our books encased in a vintage inspired cigar box.) Or just pick up an inexpensive box from a craft store, like Hobby Lobby. Someday your kids will enjoy rummaging through your manly treasures and hearing the stories behind the interesting things you’ve picked up along life’s way!