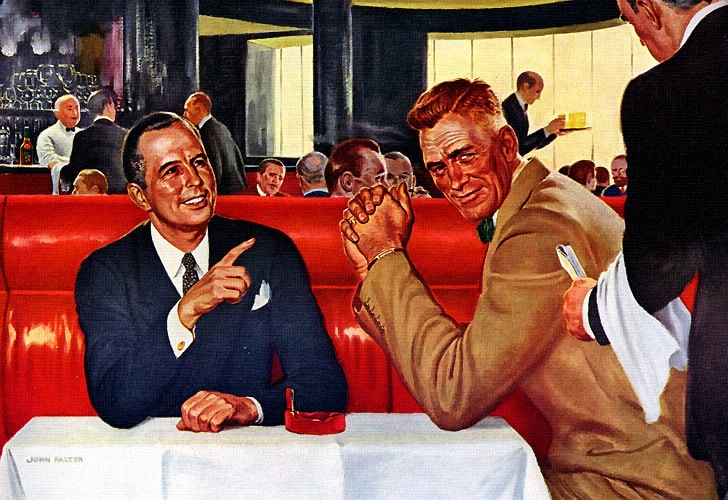 The term “power lunch” went out after the 80s along with awesome phrases like “gag me with a spoon,” but meeting for a meal with a potential client, investor, or business partner remains an excellent way to network and connect with folks who could help further your career. Breaking bread with another person creates a more intimate and casual connection and can foster positive bonds and good feelings.

But only if you handle it like a pro. Because sharing a meal also tends to reveal more about you and your habits, which makes you more vulnerable to doing something that will turn off the person you’re trying to woo. So it pays to prepare.

A lot of the same guidelines you should use when pitching an idea at someone’s office, apply to the business lunch as well, but the restaurant set-up does create some special considerations. How to navigate those considerations is what we’ll be talking about today.

Make the invitation. Before inviting someone to a business lunch, you want to make sure scheduling one is even necessary. While you may think that everyone enjoys a free meal, many folks, especially those in prominent positions, receive such invitations with great frequency, and they may 1) resent the intrusion on their time, and 2) be wary of someone trying to “buy” their favor. So always let them know that you’re willing to come see them at their office instead.

A good invitation can be worded in a number of ways but should include the following three criteria:

A good invitation goes something like this: “I would love to get together with you to talk about x, y, and z. May I come by to see you sometime? Or, better still, could you spare the time in what I know is a very busy schedule to let me take you to lunch?”

Choose an appropriate restaurant. If you don’t know the tastes of the person you’re meeting with, don’t choose an exotic or ethnic restaurant. You don’t want to bring Bob to a sushi bar only to find out he’s a meat-and-potatoes guy who hates anything raw and wrapped in seaweed. Steakhouse or bistro-type restaurants are a good bet. But make sure the menu includes one or two quality vegetarian options.

It’s wise to pick a restaurant you’ve been to at least a couple of times before, so you know that both the service and the food are top notch. But if you’re traveling and away from home, do a good amount of research online before picking the restaurant. Check out the restaurant’s website and look at reviews on other sites.

While you should never defer to the guest about where to eat, if you feel like the guest might want something more interesting than the standard fare, choose one “safe” restaurant and one more exotic place, and let him pick.

An ideal business lunch restaurant has a clean but cozy atmosphere and is moderately-priced—somewhere nice, but a place where your guest will feel comfortable even if he arrives dressed casually–and it should be fairly quiet. It should also be a restaurant that takes reservations, because you should always–

Make a reservation. Never get stuck having to tell your arriving guest that lunch won’t begin for 20 minutes because there aren’t any available tables. When you make your reservation, give your name, and the name of your guest as well, to prevent possible mix-ups.

Do some pre-meeting reconnaissance. Even if you’ve been to the restaurant before, it doesn’t hurt to scout it out before your meeting. Ask yourself things like: Does this place have the right atmosphere and vibe for what we’re going to be talking about? How’s the music? Is it so loud that conversation is going to be difficult? Where’s the best place to sit? Do they accept my credit card?

Arrive early. Be at the restaurant 10 minutes before the time your guest is scheduled to arrive. Wait at the table or bar for your guest, and tell the hostess to be on the lookout for him.

The advantage of sitting down at your table to wait is that you can talk to your waiter before your guest arrives. Let him or her know that you’ll be doing business during lunch and graciously ask that interruptions be kept to a minimum. If your guest is on a tight schedule, tell the waiter you’ll need the bill as soon as possible after the meal. You can also let the waiter know that you’ll be paying the bill and to hand the check directly to you when he brings it out.

Tip for the guest: Always make sure you go to the bathroom before you arrive at the restaurant, to avoid coming in, shaking the host’s hand and saying hello…and then immediately excusing yourself to use the restroom.

Turn off your cell phone. Nothing can torpedo a business lunch faster than a host who’s phone rings throughout the whole meal, and worse, who chooses to take those calls. Turn off your cell phone when you arrive at the restaurant, so you can give your guest your undivided attention (this goes for all meals, business or otherwise). If you are expecting a truly urgent/emergency call that you absolutely have to take, then tell your guest as soon as you two sit down at the table. Then put your phone on vibrate, and when it goes off, give it a quick look to see who’s calling, and if it isn’t the emergency call, silence it as quickly as possible.

Of course, if your guest wants to leave his phone on and answer his calls, you have to let him do that without shooting him glances of withering disdain. While your guest is talking on the phone, go to the bathroom to give him some privacy or look at your phone or proposal papers, to give him the feeling of privacy.

Let your guest go first. When your guest arrives, let him follow the maître d’ to the table while you bring up the rear. You want to give your guest first dibs on seat choice—if it’s one of those half table/half booth deals, he may prefer the booth side. If your guest hesitates, gesture for him to sit in the better seat. If your guest has long legs, make sure he’s not having to sit in a spot where he feels cramped. 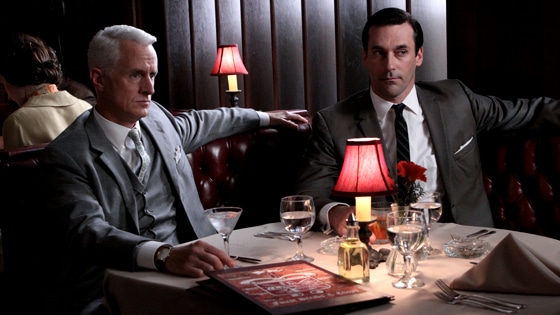 Go easy on the drinks. Mad Men may have returned for another season, but I’m afraid the three martini lunch is not making a similar comeback. Follow the client’s lead in ordering your beverages. If he orders a non-alcoholic drink, then do likewise. If he orders an alcoholic drink, you can do so too, if you desire, but order something lighter than what he’s getting. So if he orders a whiskey on the rocks, get a light beer. And don’t feel the need to match him drink for drink if he’s knocking them back; you need to be as sharp and on your toes as possible, so stick with one drink and nurse it throughout the lunch.

If you’re a non-drinker, and your guest wants to drink, you have a bit of a quandary. If you order a non-alcoholic drink while they order booze, it can make them feel a little bit like they’re doing something wrong. Personally, as a teetotaler myself, I tell the waiter, “I’ll just have a water for now.” What I order later is a diet soda, but it lets the guest feel more confident in getting whatever they’d like.

Mirror your guest’s courses. Order the same number of courses as your guest. You want to be eating at the same times, so if he’s getting an appetizer or salad, then you should too, so he’s not the only one chowing down. And you want the meal to end at the same time for both of you as well, so if he’s not getting dessert or coffee, you shouldn’t either. Also, if he orders, say a chicken-breast-something-or-other, don’t get a steak and ask for it well done. Your meal will take twice as long coming out, and delay your guest getting his food. Also, why are you ruining a delicious steak by asking for it well done!?

Order food that’s easy to eat. If you’re trying to make a good impression with your guest, don’t order stuff that might make you look awkward while you eat it. Salad can have big chunks of greens that are hard to eat in one mouthful, onion soup can create strings of cheese, and pasta and ribs can get sloppy. 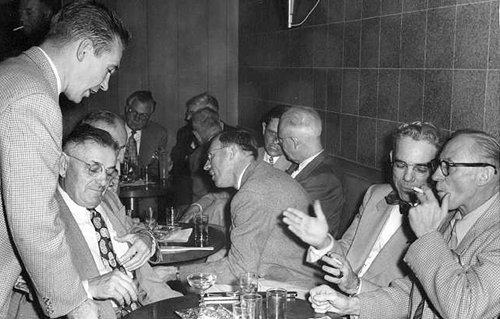 Segue into business at the right time. Don’t launch into your proposal as soon as you sit down. Enjoy a little casual conversation first. This builds rapport, and it also gives you a chance to take in some of your guest’s personality, which may lead you to tailor your pitch to his proclivities. Keep the conversation on sports, hobbies, and non-controversial news; avoid prying into their personal life if you don’t know them well.

Never talk business until at least everyone has ordered. Making the leap after the salad/soup course and before the entrees arrive is a good bet.

Treat the staff well. Is a potential client going to want to work with someone’s who’s a boor to the waiter? Nope.

At the same time, a guest, knowing you’re picking up the tab, will be less likely to make his needs known. So if the guest has a problem, kindly make sure the staff takes care of it.

Pick up the bill with confidence. Remember, whoever did the inviting is the host and pays for the meal. You should have already laid the groundwork for making your role as host clear, which will help prevent the awkward, “I’ll get it. No, I’ll get,” exchange at the end of the meal. Casually grab the bill when it comes, continuing to talk or listen to your guest as you put your credit card in the folder—don’t draw a lot of attention to and make a big deal out of what you’re doing.

No need for elaborate tricks for paying the bill “discreetly,” like giving your credit card to the waiter in advance or pretending like you’re going to the bathroom, while really finding the waiter in order to pay him away from the table. According to our old etiquette books, that’s what women used to do when they first entered the workforce in order to avoid the appearance of (gasp!) paying for a meal. Pay like a man—there’s no need for stealth and high strategy.

Post-Meal-em. After your business lunch, write a thank you card to the guest to tell him how much you appreciated his taking the time to meet with you. But don’t consider him to now be in your debt—there’s no reciprocity assumed with business lunches.  But hopefully, basking in the glow of your well-executed meal, your guest will be rather inclined to consider your ideas and a potential relationship.

What are your tips for pulling off a successful business lunch? Share them with us in the comments. 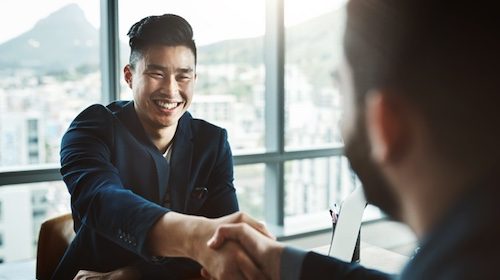 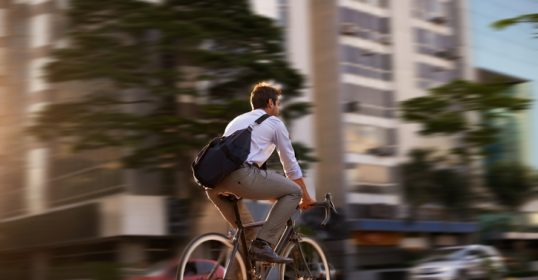 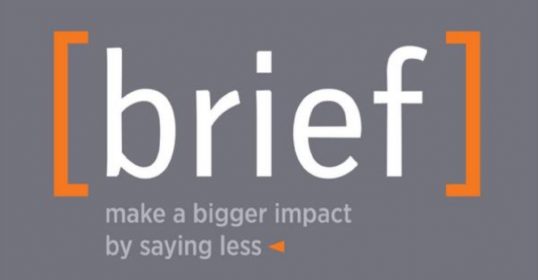 Podcast #666: The Power of Brevity in a Noisy World