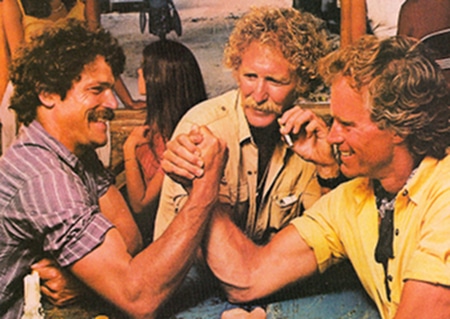 The arm wrestling match. It’s one of the manly feats of strength that every man will face at least once in his life. You never know when you’ll be challenged to display your manly strength, so you need to be ready to place your elbow on the table at any time. Contrary to popular belief, you don’t have to have cannon balls for biceps or forearms like Popeye to win at arm wrestling, though they do help immensely. But with a bit of technique, a dash of speed, and little strategery, you can beat an opponent at arm wrestling who’s stronger than you are. In this article, we’re going to show you techniques and training tips passed down by arm wrestling champs of yore, so the next time some dude challenges you to a match, you can smash his hand to the table.

There are two techniques that when coupled with a strong finish will make you virtually unstoppable in the arm wrestling ring: the top-roll and the hook. Now ideally, your implementation of these techniques should be fast and seamless, you know, like an arm wrestling ninja.

The top-roll is the most effective arm wrestling technique. Top-rolling turns arm wrestling from a showdown of bicep and forearm strength to a contest of hand, finger, and wrist prowess. The key to top-rolling is to work your hand up your opponent’s palm. Your goal is to have your hand wrapped around the top part of his hand with him holding the bottom part of yours. In order to get in this position, you need to start as soon as you hear the word go. Pull your hand towards you in order to force your opponent’s hand away from his body. This will mess up his leverage and increase yours. Hopefully, you’ll notice your opponent’s grip beginning to slip. As soon as you notice this, start moving your grip higher up on his hand. Keep doing this until you’re as high up on his hand as you can get. As soon as you reach this point, you’re ready for the finish.

The hook is simple and can be used by itself or with the top-roll. The goal of the hook is to force your opponent’s hand back, thus increasing your power and leverage. As soon as you hear “Go!” force your opponent’s hand back, and expose his wrist by twisting your wrist towards you. When you get him into this position, you’re ready for the finish. 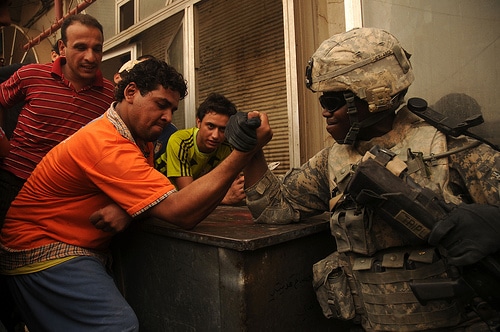 In the future, wars will be determined by arm wrestling.


Sometimes the hardest part of arm wrestling is finishing off your opponent. A man will try to ring every last bit of juice from his meathooks before letting you slam his hand to the table. Oftentimes, arm wrestling matches devolve into an interminable stalemate with one man’s hand hovering above the table while the other man is mustering all the forearm strength he can to finish the deal. Here’s how to avoid this situation-

When you’re ready to finish your opponent, rotate your body so that your shoulder is in line with the direction you want your arm to go. This will allow you to call on your much stronger shoulder muscles and utilize some of your body weight. Unless your opponent has super human strength, he’s going to have a hard time staving off defeat.

Again, I want to reiterate how important it is to do implement these techniques quickly and seamlessly. The less time your opponent has to respond, the better. This will take a lot of practice and perhaps a whole lot of losing. If your ego can’t take the beatings, arm wrestle your 11 year old nephew to get the technique down. Of course, we’ll make fun of you for having to arm wrestle a prepubescent boy with sticks for arms just because you’re not man enough to lose gracefully. Which brings us to….

You get challenged, you accept the challenge, and you lose. Don’t worry. It happens to the best of us. Realize that your arm wrestling prowess isn’t an indicator of your manliness. When your hand touches the table, give an “aw shucks,” shake your opponent’s steely hand, slap him on the back, and with a charming smile, tell him good job and that you’ll want a rematch after you’ve done the Charles Atlas program. Don’t be that guy who pins his entire masculinity on an arm wrestling match, and after losing seeks to redeem himself by demonstrating cartoonish masculinity. You know, swearing, guzzling beer, demanding rematches, name calling, etc. That guy is a real jagweed.

Also, if you’re in a position where you’re about to lose, don’t be the guy who cocks his hand so it’s almost impossible for the other guy to end the match, leaving you both just sitting there for the next five minutes in that same position. The jig is up, and you’re just delaying the inevitable. If your goose is cooked, look at your opponent, give a nod, and give in gracefully to defeat. You’ll get him next time.

The best way to train your muscles to kick ass at arm wrestling is to, well, do lots of arm wrestling. However, your friends will probably get tired of you asking them to arm wrestle all the time. Here are some novel ways to train your arm when you’re by your lonesome. 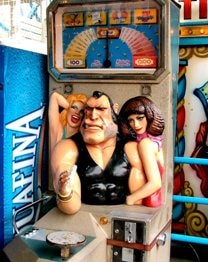 Remember these things? They had one at the Chuck E. Cheese I went to as a kid. You’re basically arm wrestling a robot. Becuase these things have hydraulics on their side, you’ll get quite a workout trying to pin the robot arm to the table. I haven’t seen too many of these sorts of machines lately. It might be because a Japanese version of the machine broke the arms of three people. Ouch!

I found this nifty contraption on Old Time Strongman (a site everyone should definitely check out). It’s a really simple apparatus. Just add weight to one end of the lever and start hammering out reps that mimic the arm wrestling motion. Pretty dang cool. It’s a shame they don’t make the Neil Lewis Arm Wrestling Machine anymore. Fortunately, there is a modern incaranton of this old strongman device, aptly named The Terminator.

I found this video of an ingenuitive man who created his own Neil Lewis Arm Wrestling Machine at home. Looks easy to put together on your own.

If you’re looking for some inspiration to get pumped up for your next arm wrestling match, look no further than the 1987 Sylvester Stallone classic Over the Top. Yeah, it’s an entire movie dedicated to arm wrestling. How cool is that? Stallone plays a struggling trucker named Lincoln Hawk who arm wrestles on the side to make extra money. After the death of his wife, he tries to make amends with his son who he left behind years earlier. Upon their first meeting, his son doesn’t think too highly of Hawk. But over the course of the film, he warms up to his dad, and they form a great father-son relationship. Arm wrestling and a touching father-son story. What more can you ask for in a movie?

One of the coolest things I remember from this film is the weight lifting machine Hawk has set up in his big rig so he can train his arm wrestling arm while driving. That’s a man who is dedicated to his sport. If someone else has replicated this in real life, my kuddos to him. I’d love to see a pic.

So you’ve got the technique down, you know how to lose gracefully, and you’ve learned how to train for your next arm wrestling match. To pump you up for your next match, we’ll leave you with the final scene from the best and only film about arm wrestling, Over the Top. Notice how Hawk uses the top roll to finally defeat his opponent. See, it works in the movie, so it will work for you. Enjoy and get out there and show somebody’s foreman who’s boss.