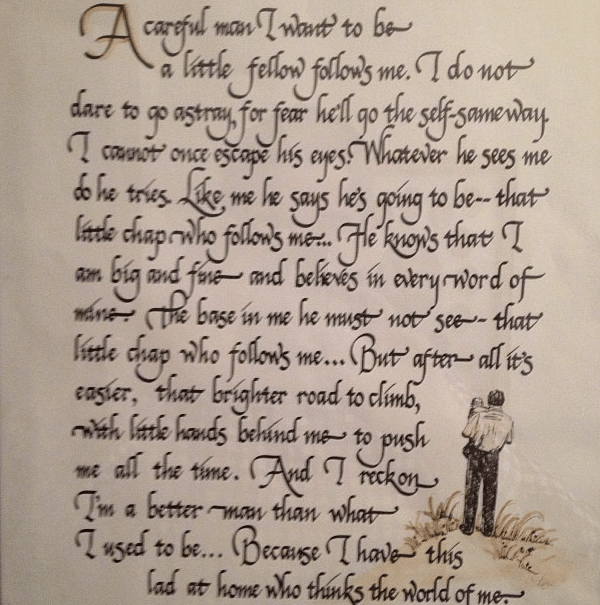 Editor’s Note: In honor of Father’s Day, I wanted to share an anonymously-penned poem that’s hung in my parents’ home for as long as I can remember. I never gave it much thought as a kid, but since becoming a dad, it’s become one of my favorite poems. It’s a simple, gentle reminder to always be your best self because you’ve got a little person who thinks the world of you. Happy Father’s Day to all the loving and honorable dads out there!

A careful man I want to be —
a little fellow follows me.
I do not dare to go astray,
for fear he’ll go the self-same way.
I cannot once escape his eyes.
Whatever he sees me do he tries.
Like me he says he’s going to be —
that little chap who follows me…
He knows that I am big and fine —
And believes in every word of mine.
The base in me he must not see —
that little chap who follows me…
But after all it’s easier,
that brighter road to climb,
With little hands behind me —
to push me all the time.
And I reckon I’m a better man
than what I used to be…
Because I have this lad at home
who thinks the world of me.