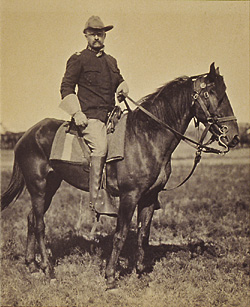 Theodore Roosevelt, who arguably accomplished more than any other American man, called his experience in the Spanish-American War, “the great day of my life.” It was during his charge up Kettle Hill that Theodore Roosevelt’s leadership and confidence finally crystallized. He passed the test and emerged as a leader capable of ascending to the presidency. His actions during the war impart crucial lessons on manly leadership:

1. Walk the Walk. Theodore Roosevelt was a sickly child who grew up reading of ancient battles and warriors and longing to be one. He built up his body and as he got older started writing his own books about military feats. Yet he still longed to see action firsthand, and when the opportunity finally arrived, he wasted no time in seizing it. As soon as the Spanish-American War broke out, Teddy pestered the Secretary of the Navy for a commission in the army. He then sold his cattle ranch and some of his possessions, and took out life insurance in preparation of receiving it. He was fully prepared to put his money where his mouth (and pen) was.

2. Know your limitations. Teddy was never short on confidence, but he didn’t let cocksureness slip into arrogance. When Roosevelt got his wish for an army commission and was offered command of the First United States Volunteer Calvary as Colonel, he turned it down citing his lack of tactical experience. He instead accepted a position as Lieutenant Colonel and recommend Leonard Wood to be Colonel. (TR would later become Colonel when Wood was promoted to brigadier general.)

3. Pick the best men for your team. If you wish to surround yourself with the best men, you must be the kind of leader men fall over each to serve under. 23,000 men applied to be part of the First Calvary; most of them addressed their letters to Roosevelt even though Wood was technically in charge. Of the 23,000 only 560 were chosen. Some of the rejected cried, so heartbroken were they on not being able to be part of Roosevelt’s Rough Riders. Composed of the West’s best frontiersmen, marksmen, and horsemen and the East’s great athletes and prominent sons, the Rough Riders were a unique and unstoppable group. 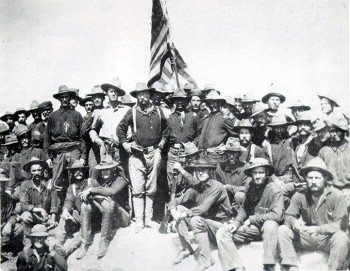 4. Be one of the men. The ship which transported the troops to Cuba did not have room for many horses; Roosevelt was one of the few men in the regiment able to take his. When the Rough Riders arrived in Cuba, they began their march to Las Guasimas. The temperature was simmering, and the men trudged through the heat in thick uniforms and heavy bedrolls. Still, Roosevelt walked alongside the men, refusing to ride while they were marching.

5. Lead by example. Don’t ask others to do anything you are afraid of doing yourself. When it came time to take the San Juan Heights, TR’s regiment ran into heavy fire from the Spanish. As bodies piled up all around him, TR stayed on his horse as an example of courage. However, there was a delay before they could start scaling the hills, and the men, including TR, were forced to lay low and take cover. When the order finally came to take Kettle Hill, the men were reluctant to rise to their feet. TR mounted his horse and shouted, “Are you afraid to stand up, when I am on horseback?” He promptly took off, galloping across an open area and under a hail of bullets.

6. See it through. After securing Kettle Hill, TR noticed that the attacks on the neighboring San Juan Hill were faltering. He shouted for his men to charge, leaped over a barbed wire fence, and ran down the hill. When he glanced back, he saw that only 5 of his men had followed. 3 of these 5 were shot and TR was practically leading the charge single-handedly. He ran back under heavy fire, formed the remaining men (who claimed to have not heard the initial order) into a formidable assault line, and began the charge again.

Roosevelt’s personal bravery and leadership were critical elements in the success of the Battle of Las Guasimas. In 2001, Roosevelt was posthumously awarded the Medal of Honor for his actions.