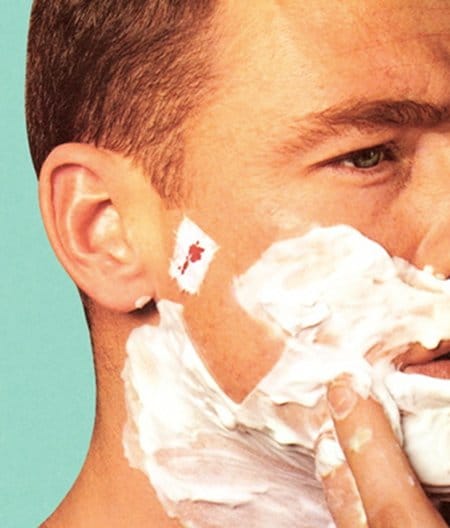 No matter how careful you may be, shaving nicks and cuts are bound to happen. The go-to remedy for most gents is to simply apply small pieces of toilet paper to their little wounds and wait for them to clot up. While effective, it can take a long time for the bleeding to stop. And (in my experience at least), it’s easy to forget that you have unsightly pieces of bloody tissue paper on your face before you walk out the door. Nothing ruins a first impression like bloody pieces of toilet paper plastered to your face.

Below, I offer some alternative remedies that go beyond toilet paper squares for treating and stopping the bleeding on minor shaving cuts. I’ll also cover what to do if you fall victim to a super serious shaving casualty.

Treatments for Small Nicks and Cuts

Products Specially Made for Shaving Cuts

There are a variety of products out there that are specially made for treating small shaving cuts. While the way in which they are applied differs, the active ingredient in all of these products is an astringent. Astringents constrict the tissues in your skin and coagulate and dry the blood in your cuts. 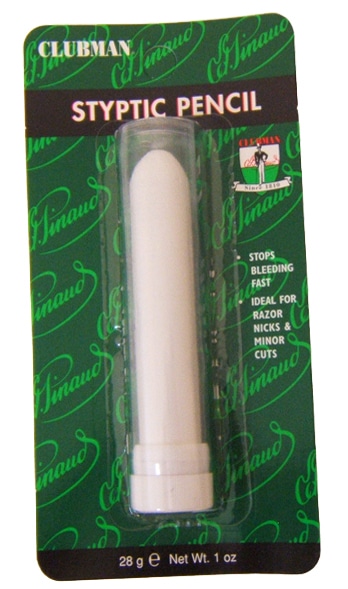 Styptic pencils. Your grandpa probably had one of these in his shaving kit. A styptic pencil is a small stick made of mineral astringents like anhydrous aluminum sulfate, potassium alum, or titanium dioxide. To use a styptic pencil, just wet the tip a bit and press it against your nick for a few seconds. It stings a little, but the pain is worth it, as the bleeding usually stops. Quick tip: After you apply the pencil, give your face a once over in the mirror before you head out the door. In my experience, it leaves a white, powdery residue where you applied it. Rinse it off so you don’t arrive at work looking like you just polished off a pack of Hostess white powder donuts in the car. 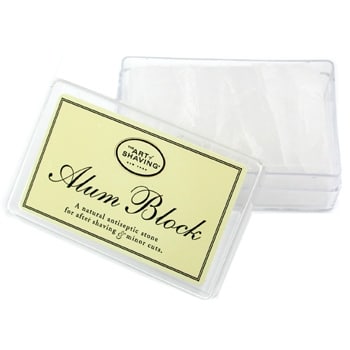 Alum block. This consists of a bar-of-soap-sized block of potassium alum that you wet, and rub on your face after shaving. It works pretty much the same way as a styptic pencil – shrinking the skin’s tissues and stymying the flow of blood. The only difference is that while the styptic pencil is for spot-treatments, alum blocks are for treating your entire face. This can come in handy if you’re trying out straight razor shaving for the first time, as you’ll likely have multiple nicks all over your face, making you look like some creepy, bleeding religious statue on Unsolved Mysteries. Shudder.

I know several gents who use alum blocks post-shave even if they don’t have any nicks or cuts. Besides acting as astringents, the minerals in an alum block also have antiseptic qualities which can help prevent razor burn. Also, the tingly sensation it gives the skin just feels nice. 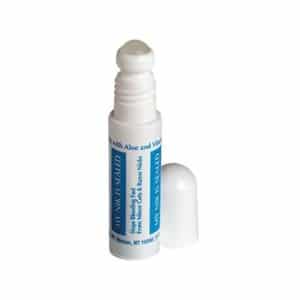 My Nik Is Sealed

Special shaving nick rollers and gels. In recent years, a few companies have developed products that have the blood-stopping capability of the styptic pencil, but with less sting and white chalky residue. In addition to aluminum chloride to stop the bleeding, these rollers and gels have ingredients like aloe and vitamin E to help soothe your skin. Pacific Shaving Company Stick, and My Nik Is Sealed, are two popular specialty shaving nick products. 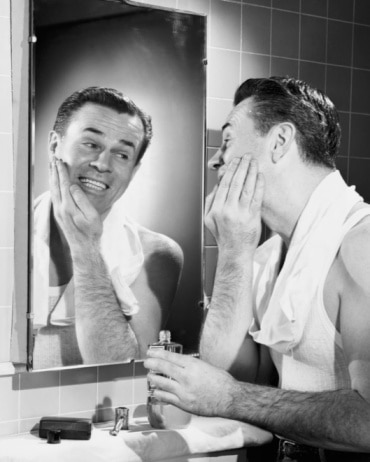 Aftershaves (or skin bracers).  The alcohol in many aftershaves acts as an astringent, and so can help slow bleeding a bit. If your aftershave has witch hazel in it as well, even better – it’s a potent astringent too. And alcohol also acts as an antiseptic, which can help prevent skin infections like razor burn. To top it all off, aftershaves leave you smelling awesomely manly. I know many men who don’t like the skin bracing sting of aftershaves, but I personally enjoy it. Wakes me up a bit!

Home Remedies You Can Use in a Pinch

If you don’t want to get a special product to deal with your shaving wounds, or you’re in a pinch and don’t have your go-to remedy on hand, these methods can also offer relief for your nicks and cuts.

Cold water. Even if you do favor the use a product specially made for shaving cuts, splashing cold water on your face should always be your first go-to remedy when you nick yourself. Cold water can be all you need, and you’re almost sure to have it on hand. When using this remedy, the colder the water, the better. It will cause your blood vessels to constrict, causing the flow of blood to slow and eventually clot. For faster and more effective results, try rubbing an ice cube on the cut.

Anti-Perspirant. If you don’t have a styptic pencil or alum block on hand, dab a bit of your anti-perspirant deodorant on your wound.  The aluminum chloride in anti-perspirants not only prevents sweating, but it also acts as an astringent.

Lip balm. Lip balm can help stop the bleeding from shaving nicks in a pinch. The waxy texture helps seal the wound and allows a clot to form.

Petroleum Jelly (Vaseline). Applying a small amount of Vaseline to your nick does the same thing as lip balm. Just make sure to wipe it off before you leave the house.

Listerine. That’s right. The stuff you use to make your mouth feel all fresh and clean can also be applied to your shaving nicks. After all, it did actually start out as a surgical antiseptic and was used to clean wounds on the battlefields of WWI. 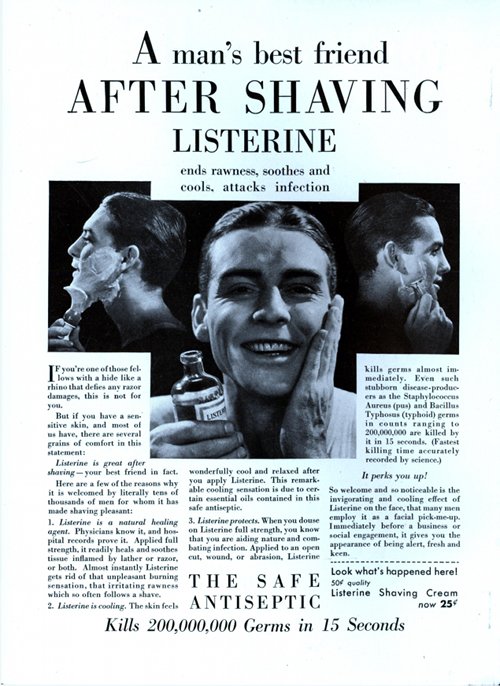 Keeps your mouth smelling fresh and your face looking great.

I learned about the Listerine-as-aftershave trick after seeing several Listerine ads in a bunch of old men’s magazines touting the benefits in bracing the skin after a good shave. I actually gave Listerine a try as an aftershave after I saw these ads, and was pleasantly surprised by the results. Yes, it stung like hell, but I’ll be darned if the few small nicks I had on my neck stopped bleeding. And the antiseptic tingle felt great on my skin. And my cheeks smelled minty fresh.

Other surprising uses for Listerine that I picked up from those old ads include treating skin rashes and dandruff. They also advertised it as a treatment for sore throats and colds…at least until the Federal Trade Commission told them that was baloney and to knock it off in the 70s.

A bit of related trivia: Aqua Velva aftershave was originally marketed exclusively as a mouthwash for men in the 1920s. It’s wasn’t until 1935 that it was pitched as an aftershave. Not sure if today’s Aqua Velva formula would allow it to still be used as a mouthwash. Anybody know? 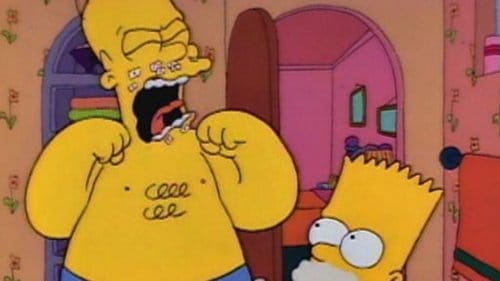 When all else fails… toilet paper. Your results may vary with the above remedies. If none of them work for you, there’s always good old-fashioned toilet paper squares.

Most shaving nicks and cuts will just result in some spotty bleeding that can be stopped quickly using any of the above methods. But every now and then, you’ll have one of those slips of the wrist that create a gusher of a cut. No amount of styptic penciling or toilet papering will stop blood from pouring from these wounds. These more serious shaving cuts usually happen near the lips, underneath an earlobe, or on the neck and are more likely to occur with a straight razor than with a safety or cartridge razor. So if you’re getting started with straight razor shaving, make sure you’re completely focused on what you’re doing.

If you find yourself with a gusher, follow these steps.

Apply firm pressure over the wound. Get a Kleenex and press down on the point where the bleeding is the most severe. Hold for five minutes. If the bleeding stops, clean the wound with hydrogen peroxide and an antibiotic cream, like Neosporin, to prevent infection. (You don’t want your name added to the list of men who have died from shaving.) If necessary, apply a band-aid over the wound. Yes, you’ll look silly, but it’s a small price to pay to learn and master the fine art of shaving like your great-grandpa.

Pinch and hold the bleeding area.  If firm pressure for five minutes doesn’t stop the bleeding, use your thumb and index fingers to pinch the skin together from which the blood is flowing. That should help close the vessel. If bleeding stops, clean, and apply antibiotic ointment. Bandage if necessary.

Go to the hospital. If none of the above works, and you’re still bleeding like a stuck pig, have someone take you to the emergency room. You’re probably going to need stitches. At least you’ll have a cool scar on your face. Just don’t tell people you got it while shaving.

Listen to our podcast with Mark Herro on all things shaving: 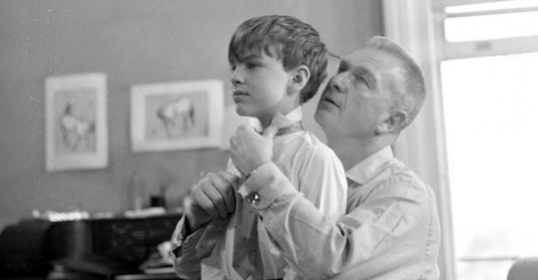 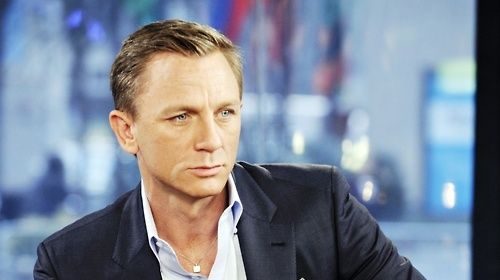