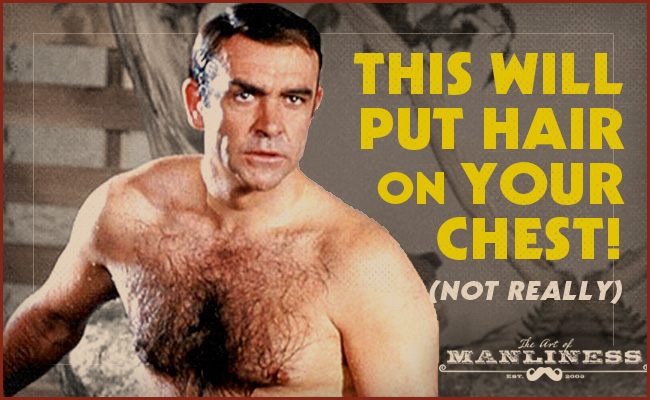 With our archives now 3,500+ articles deep, we’ve decided to republish a classic piece each Sunday to help our newer readers discover some of the best, evergreen gems from the past. This article was originally published in November 2017.

When I was a boy, whenever there was a food or activity that I didn’t want to partake of or participate in, my dad, like most dads in America, would tell me, “It’ll put hair on your chest!”

When you’re an eight-year-old boy, you intuitively understand that one of the things that makes you a boy and not a man is the fact that you don’t have body hair. So the idea that you could consume some gross food or do some unpleasant thing and instantly sprout chest hair, thus getting one step closer to manhood, was intriguing.

My dad’s claims were all the more believable because the man has a chest rug that would put Tom Selleck, Pierce Brosnan, and Sean Connery to shame. My eight-year-old logic was thus: “Dad says this gross stuff will put hair on my chest. Dad does/uses this stuff. Dad’s chest is really hairy. Therefore, it will, undoubtedly, put hair on my chest, too.”

Of course, my dad (like all dads) was joking when he said “It will put hair on your chest!” But when you’re just an impressionable lad, you don’t have a finely tuned sense of humor and you take everything your parents say at face value. So like many boys, I fell for this ruse over and over again. But, alas, no matter how much horseradish sauce I ate or how hard I worked in the yard, I never grew a single pre-pubescent chest hair.

In fifth grade I finally realized I’d been conned after I watched that video about puberty (I think it was called “Greg’s Story”?) that they showed in health classes in the early 1990s. That day I learned that testosterone and genetics determined chest hair growth, not eating or doing unpleasant things.

My dad had his go-to things that he claimed would put hair on your chest. I was curious if they matched up with what other men heard from their fathers. So I asked our followers on Twitter what their dads said would make them more hirsute. I was surprised by the consensus of the answers; this is apparently a well-established cultural custom.

Below I highlight ten of the most common things we were told as boys would put hair on our chests (but actually don’t). I hope it will help further the tradition of benign parental cons (i.e., Santa Claus, tooth fairy, “your face will stay that way if you make it for too long,” etc., etc.). 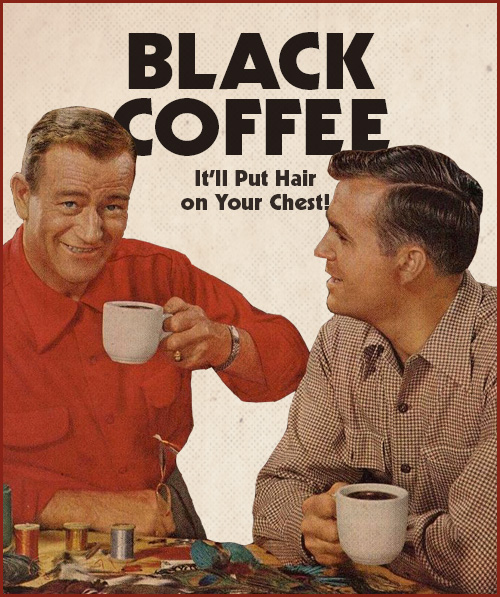 My dad was and is a big coffee drinker. And he always takes it black. To an adult, coffee smells and tastes divine, but to a seven-year-old, it smells and tastes wretched. When I snuck a sip of my dad’s brew and told him it tasted awful, he, of course, told me that cups of hot joe put hair on your chest. But only black coffee, mind you. He was very explicit about that. Add cream and sugar and you’re destined to have a chest like a Ken doll.

Tabasco Sauce (or Anything Spicy) 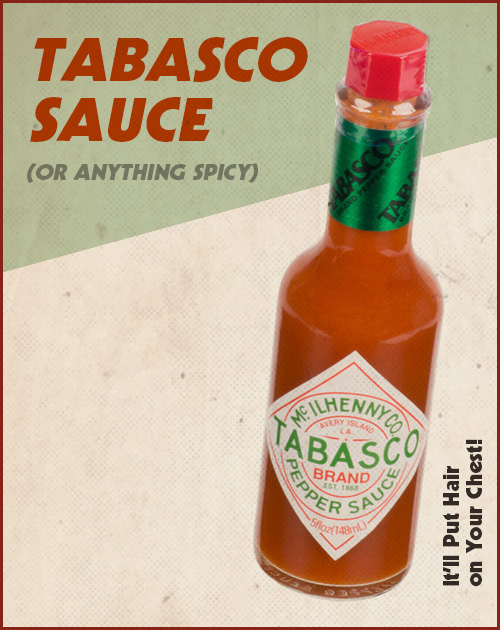 Many men reported that their fathers told them Tabasco sauce or spicy peppers would fertilize their pectoral hair. My dad did the same. Nothing happened to my chest, but my face did get really red and sweaty. 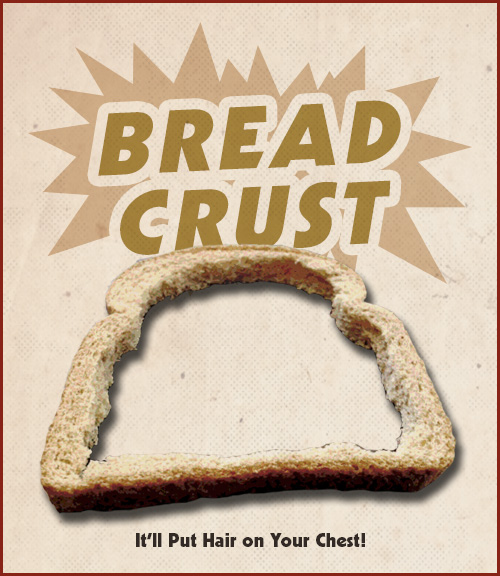 Like many kids, I’d avoid eating bread crusts. But according to fathers across the country, bread crusts contain nutrients that will put hair on your chest. Maybe they were on to something. There’s been a marked decrease in testosterone levels that coincides with the rise of crustless, ready-to-eat peanut butter and jelly sandwiches. Young boys are being denied the crust nutrients that will help them grow chest hair. Call your congressman! This is a travesty! 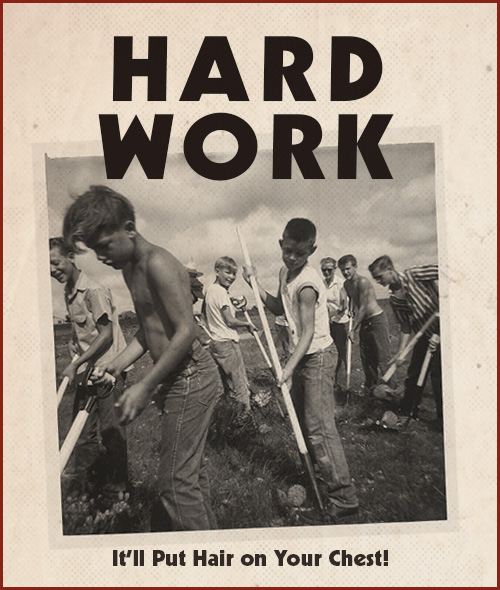 Tom Sawyer duped his friends into whitewashing his Aunt Polly’s fence by telling them how much fun it was; dads dupe their boys to do their chores by telling them it will put hair on their chests. Hard work — particularly down and dirty manual labor — was a common chest hair-promising activity amongst our Twitter followers. It’s a trap! 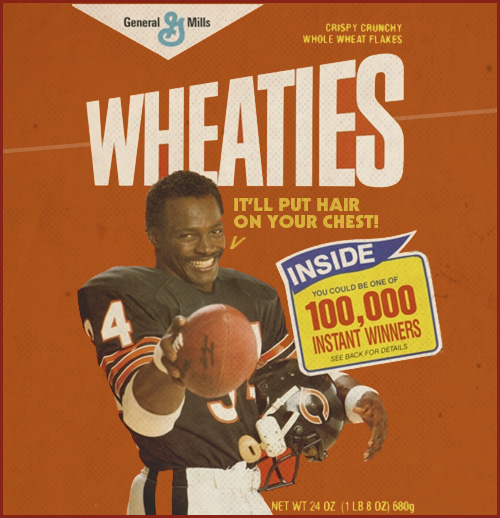 Just as putting on PF Flyers would make you run faster and jump higher, Wheaties promised to improve athletic performance immediately after consuming a giant bowl of their bran flakes. My dad also told me that the Breakfast of Champions would put gold medal-caliber hair on my chest. Despite going a month straight eating Wheaties every morning back when I was ten, I still couldn’t do a single pull-up and my chest was still silky smooth. Thanks a lot Walter Payton (and Dad)! 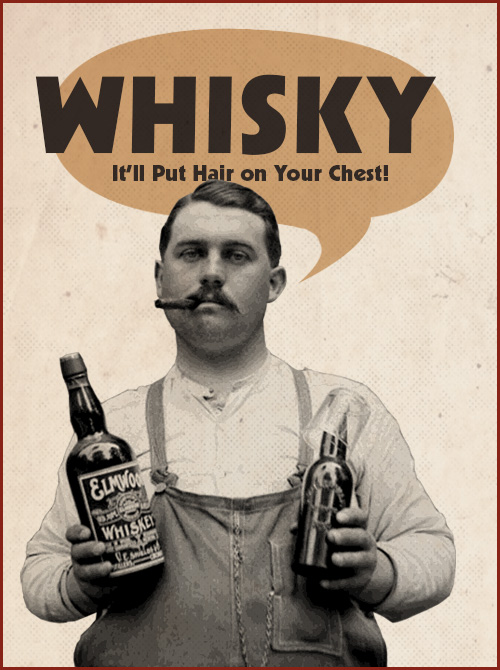 Many men were told that whisky would put hair on their chests. The jolt it gives you as it goes down pushes the chest hair out. This is a proven scientific phenomenon. It’s why ladies shouldn’t drink whisky. Google it. 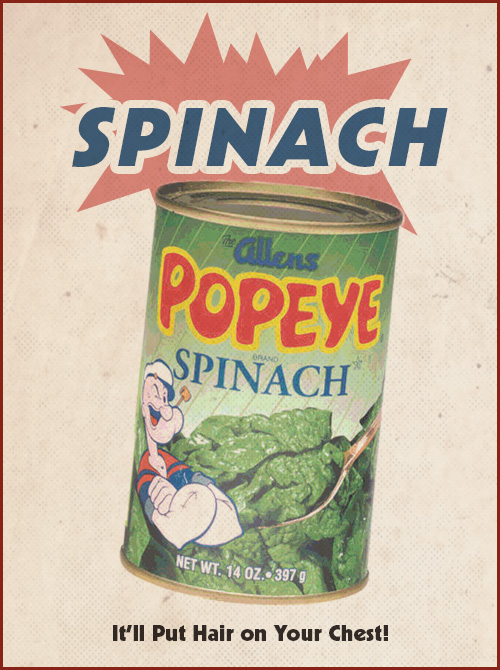 Spinach, while packed with nutrients, tastes a little bitter and is unpleasantly soggy when cooked. No wonder kids don’t like the stuff. But I held my nose and swallowed it whole based on the promise it would put hair on my chest and would help me grow disgustingly disproportioned forearms like Popeye. Alas, my spinach eating was in vain. 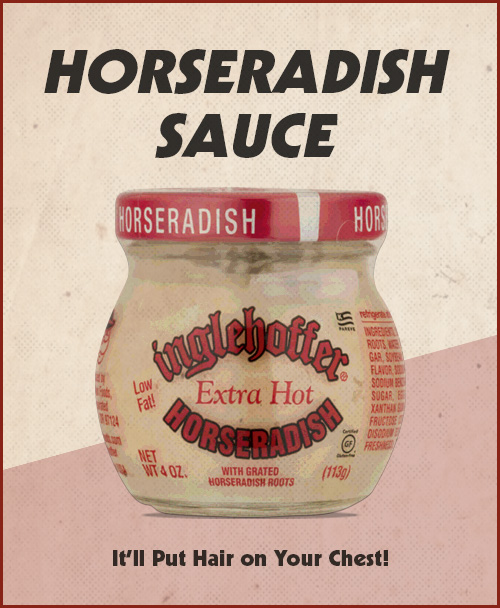 My dad was a fan of the horseradish sauce. When I tried it for the first time as a boy, I got that walloped-in-the-nose feeling you get when you eat the stuff. Vowing never again to eat horseradish sauce, my dad encouraged me to change my mind, saying it would, of course, put hair on my chest. So I continued to dip my carrots in it. Apparently my dad wasn’t alone in saying horseradish sauce would grow your chest carpet. This was one of the most common items our Twitter followers responded with. While I didn’t grow chest hair from eating horseradish sauce as a boy, I did develop a love of this punchy cream. 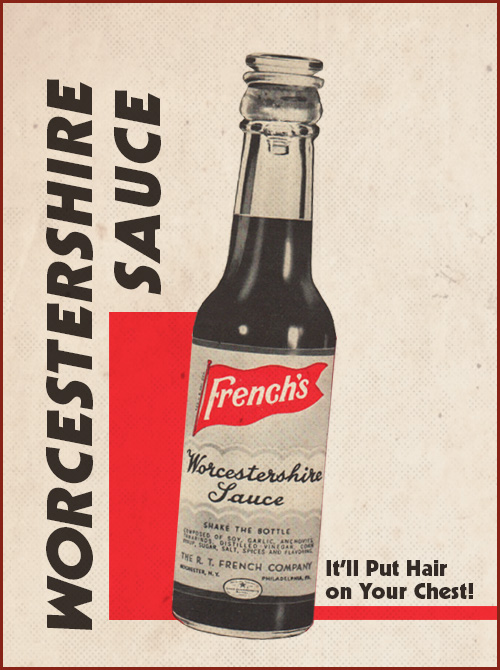 Worcestershire sauce is a fermented liquid made up of (among other things) anchovies, vinegar, onions, and garlic. In other words, to a kid, it’s an exotic, slightly intimidating elixir, and of course, a chest hair grower. This is a form of supposed chest hair Rogaine I actually enjoyed. Worcestershire’s got a nice, savory, umami taste which makes it great for adding to meats. Trying to amplify the sauce’s chest hair-growing abilities, my brother and I experimented with making a concoction of lemon juice, tomato juice, and pepper, which tasted gross to us, but is just the the kind of cocktail John Wayne enjoyed. 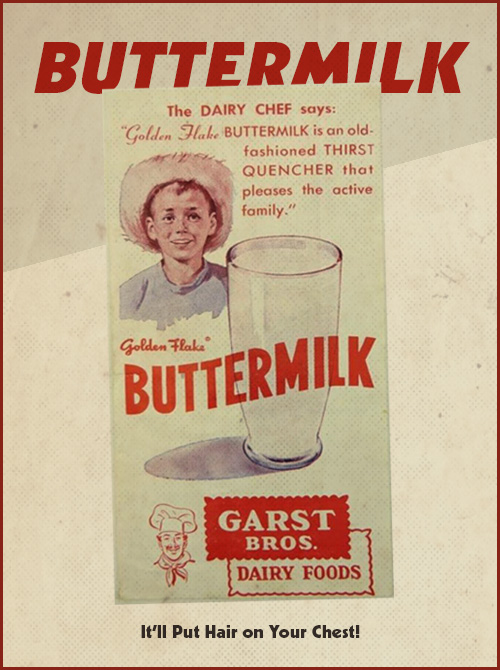 This was a new one to me, but several dudes said that their dads told them buttermilk would put hair on their chests. The tart, acidic taste of buttermilk likely made kids turn up their noses to it, thus causing fathers to nudge them to drink it by affirming its follicle-stimulating effects. Doesn’t work to give you that Connery-esque chest carpet, unfortunately, but it sure makes a mean pancake.