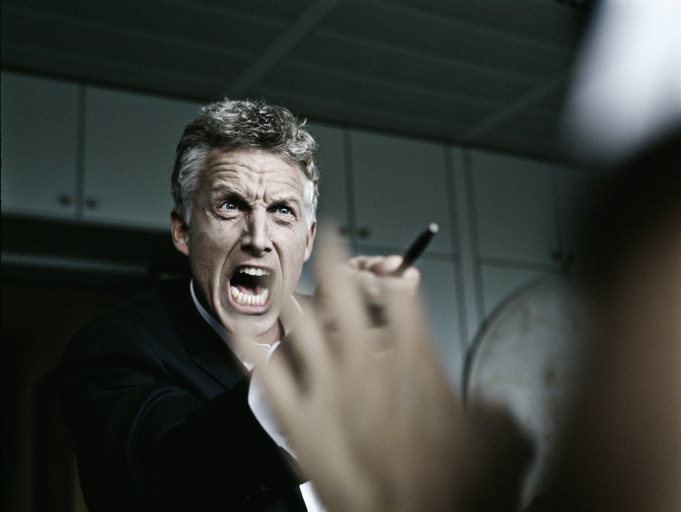 We’ve all likely encountered someone who’s acting angry or hysterical.

A customer flips his lid at you because he didn’t get his order exactly how he wanted it.

A co-worker goes berserk because someone failed to fill up the coffee pot.

A friend is freaking out because she lost her job.

These kinds of situations can feel fraught and catch us flat-footed.

Because the person is making you and others uncomfortable, may escalate their emotional outburst into something legitimately dangerous, or is someone you simply care about and want to help, you’d like to be able to calm them down.

But how do you do that?

I talked to three-time AoM podcast guest Laurence Alison to get his advice. Laurence is a forensic psychologist who trains military and law enforcement agencies worldwide on how to interrogate and question criminals and terrorists. His job requires him to talk to and build instant rapport with people who are often really, really angry and really, really upset. Here are six rules he’s learned from his line of work that you can apply in your own life.

6 Rules for Calming Someone Down

Your overarching goal when calming someone down is to create a context that allows their angry/upset feelings to dissipate. You do that by 1) preventing them from getting even more amped up, and 2) facilitating the discharge of their stressed feelings. These six rules cover both prongs of this approach.

According to Laurence, the biggest mistake you can make when dealing with someone who is angry or upset is to follow your instincts.

“You feel upset because they feel upset, and you don’t like feeling upset, so you’ll say or do things to calm them down that are actually counterproductive,” Laurence told me.

If you want to calm someone down effectively, you can’t operate from a place of emotional reactivity. You have to override your feelings of stress that are being stirred up by the other person. You can’t let their emotions spread to you. Your job is to stay cool and collected.

When we see someone upset or angry, we instinctively want that person to stop being upset or angry. So we usually say something like, “Hey, you need to chill out!”

But according to Laurence, you never want to tell someone to calm down.

“When you’re dealing with angry or anxious individuals, you want to avoid what we call ‘reactants,'” he told me. “These are words or actions that will only agitate the person even more. A big reactant is instructing, advising, or trying to persuade someone to calm down. Being told what to do just sets people off. It’s like a red flag for a bull.”

So while your instinct will be to say, “Calm down,” don’t do that.

Rule #3: Keep Some Space Between You and the Person

Another reactant that amplifies someone’s upset is crowding them physically. When dealing with someone who’s agitated, you should instead put some space between you and them. Not only does this help reduce the person’s agitation, Laurence says, but it also protects your safety.

This is especially important when dealing with someone you don’t know, as you’ll be more uncertain of their potential for violence. Laurence recounted a situation that went sideways where a guy didn’t maintain space between himself and an angry stranger:

To be clear, the dog didn’t bite the guy, the stranger did. Keep space between you and the other person.

A standard bit of advice you hear about building rapport with people is to mirror them. If they lean in, you lean in. If they talk excitedly about something, you talk excitedly.

When dealing with an agitated person, however, you don’t want to engage in mirroring. “When you start raising your voice, talking fast, and using highly emotional language like the angry or upset person, you just give their anger and upset more oxygen,” Laurence told me.

Mirroring an angry or upset person will only trigger a vicious cycle of escalating emotions. As mentioned above, you need to keep your cool. Laurence recommends taking slow, deep breaths and slowing down your speaking. You’re trying to get the other person to mirror your prosocial behavior. Your goal is to be a calming influence on the other person.

In Laurence’s work with terrorists and criminals, he’s discovered that what most people want when they’re angry or upset is to feel understood. When someone doesn’t feel understood, it makes them more angry and frustrated.

So show the person some empathy.

Laurence is quick to point out that empathizing with someone who’s irrationally upset about something or acting like a complete jerk doesn’t mean you condone or agree with them. You don’t even have to feel what they’re feeling.

Laurence’s idea of empathy is more intellectual. Empathy isn’t just about sharing someone’s feelings, but understanding them. He advises looking at the behavior and words of the other person with the kind of detached curiosity Spock displayed on Star Trek. Harness your inner anthropologist and study the curious practices of this agitated human.

Ask open-ended questions to find out why the person is angry or upset. Use the invitation: “Tell me more.” Let the person know you understand by offering phrases like “I can see that made you angry.” Be sincere and non-patronizing in your curiosity.

Letting the person talk to a receptive ear can go a long way in defusing a highly charged or emotional situation.

Rule #6: Take a Timeout and Suggest Going for a Walk

The thing about anger and upset is that they’re very fast emotions. They generally come on fast and dissipate fast.

You can use that to your advantage by suggesting to the angry or upset person that you take a walk together. Again, you want to avoid ordering them to do it. That’s a reactant. Just say something like, “I’d like to hear more about this. How about we take a walk and you can tell me more about what happened.”

This does a few things. First, it can get the angry person away from others who might be uncomfortable. Second, you’re effectively creating a timeout for the person so the highly-charged emotions can blow over. And third, walking gets the angry or upset person breathing, which is good for calming them down.

Laurence advises that you’ll need to use this advice in context. If you think the person could get violent, you don’t want to go off on a walk by yourself with them. Use this tactic when you feel it would be safe to do so.

To sum up: to defuse someone’s stress, stay calm yourself, avoid throwing fuel on the fire, and allow the person to feel heard and understood. Their upset will likely blow over quickly; you just have to weather the passing storm with equanimity.

If you’re dealing with someone who’s upset in the sense of simply being sad and in need of comfort, check out this article — one of the most useful we’ve written.

For more tips on building rapport, in both negative and positive contexts, listen to our podcast with Laurence and his wife, Emily: