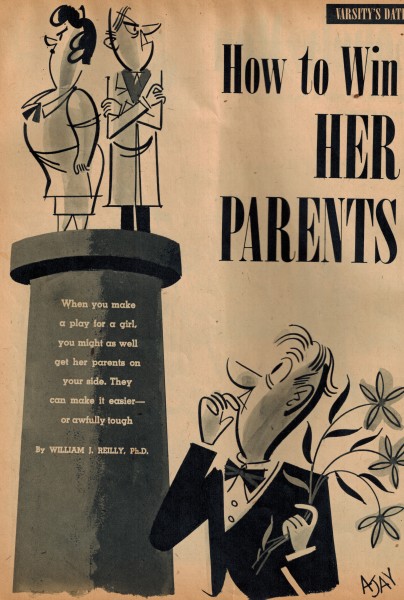 Editor’s note: Will you soon be meeting your girlfriend’s parents for the first time? Then read up on the following tips offered in a 1948 issue of Varsity magazine. For more pointers on navigating this potentially nerve-racking encounter, check out our own advice on the subject. And be sure to brush up on your small talk skills and table manners.

“How to Win Her Parents”
By William J. Reilly
From Varsity: The Young Man’s Magazine, August 1948

When I made my first formal call on my first girl, I made a big hit with her parents.

I was just sixteen, and as I approached their fashionable home in a strange neighborhood, my heart beat faster, and I felt somewhat apprehensive because I was traveling an uncharted course in more ways than one.

My girl answered the door. She showed me into the living room. And then things began to happen fast.

I had just been seated when her father entered the room to be introduced. I was so anxious to meet him half-way, like a man, that I sprang from my seat, took two brisk steps forward, felt a throw-rug slip on a highly-polished floor, and fell flat on my back.

Simultaneously, the lady of the house entered the room to be introduced, and it all turned out to be exceptionally informal. I was an instant hit.

The trouble is, you can’t always plan and time things that perfectly.

Incidentally, why anyone ever places a throw-rug on a highly polished floor – except as a dirty and deliberate trap – is something I shall never be able to understand.

The primary impetus for my current preoccupation with the subject of how to win over your girlfriend’s parents is born of the fact that I have a son, just sixteen, whom I am coaching, and two daughters, eighteen and twenty. And both are called on from time to time by various young men, some of whom desperately need a few friendly tips on what to do and what to say when confronted with the girlfriend’s parents. 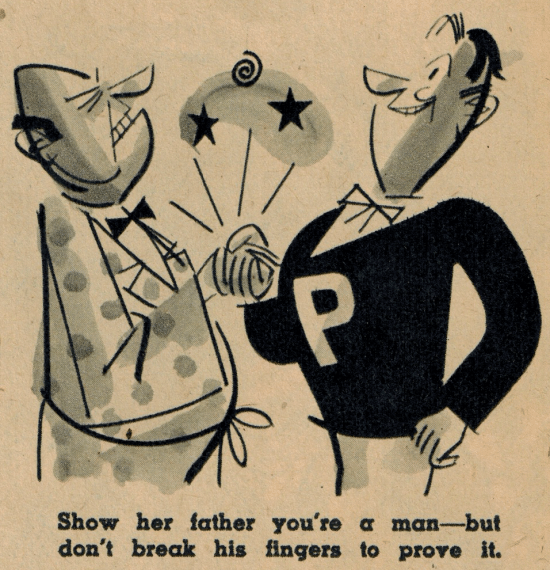 The first mistake I made, which led to my initial downfall, was being over-energetic in the presence of my girl’s parents. If instead of springing to my feet and dashing toward her father to be introduced, I had quietly risen from the chair and waited for him to come to me and pump my hand, everything would have been all right, and my natural feeling of nervousness would not have been quite so apparent.

On entering anyone’s home for the first time, try to relax as best you can. Don’t engage in any sudden moves or changes of direction. Just remember that you’re the guest, and let the host or hostess come to you. Let them say they’re glad to meet you, and then tell them that you’ve been looking forward to meeting them.

But what to say from then on is the tougher problem. 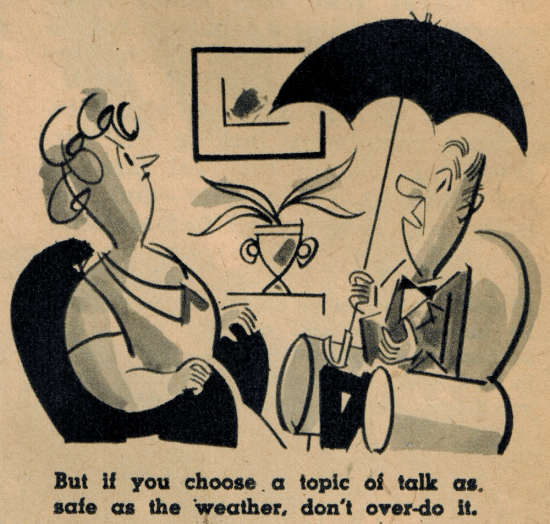 Last May, a young man called to take my daughter to the midget auto races. While we sat on the front porch and waited for her to appear, I couldn’t get the chap to stop talking about the weather. It was a nice evening, I thought, before he came. But before he left, I began to think maybe I’d better change to my heavy underwear.

It’s perfectly all right to comment briefly about the weather and let it go at that. But unless there’s been some unusual storm or flood, or unless you happen to meet your girl’s parents right in the middle of a hurricane, the weather should not be depended on as the basis for any prolonged social conversation. 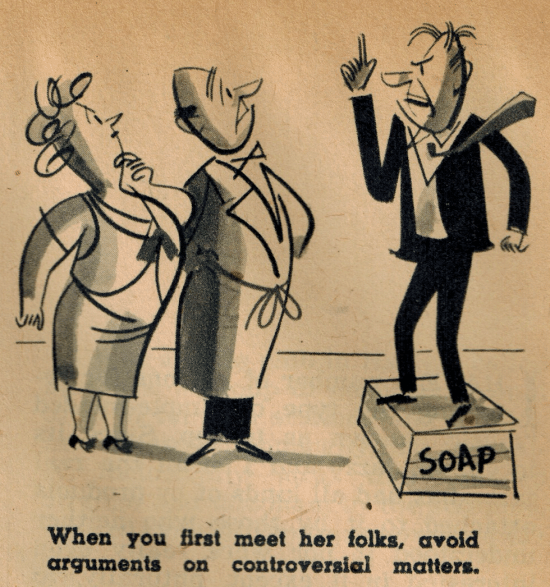 On the other hand, highly controversial subjects such as politics or religion should be avoided, at least at first. If you’ll just remember when you call for your girl, that you are the guest, and let the parents carry the conversational ball, you’ll avoid a lot of trouble. And unless you’re an expert, even parlor tricks can be dangerous.

Most parents have something they like to talk about. But once in a while you may find yourself with a parent who refuses to take the conversational lead. Then it will be up to you to assume the initiative and break the thunderous silence. Sports – from football to bowling – will usually interest the father. Anything you have to say about her home or her children will usually please the mother and start her talking. And if none of these works, one sure-fire question to ask either or both of them is what time they want you to get their daughter home. They’ll love you for this. Then be sure to get her home at the appointed time and they’ll think you’re wonderful.

If you spend an evening at your girl’s home, playing records and so forth, leave a little earlier than you think they think you should, instead of a little later. This really impresses the parents. On the other hand, if either or both of them is obliged to call downstairs in order to get you to tear yourself away, their estimate of you may do a sudden nose-dive.

If you’re asked to dinner at the girlfriend’s, be sure you arrive on time, armed with flowers or candy for your girl’s mother – and you’ll be off to a good start. Eat everything that’s put on your plate, praise the cooking, be sure to pass your plate for one small extra helping of whatever seems to be in largest supply, and don’t forget to remember that at a dinner table, more than any other location, the eyes of Texas are upon you!

Sooner or later, great moments come to every man. And one of these is when you’re invited to your girl’s home for a weekend.

This presents the supreme test of social adequacy.

The biggest mistake I made on my first weekend at my girl’s, was to stall around until I had missed my train home on Sunday night.

When my girl and I re-appeared at her home around eleven o’clock that night, her parents glared at me, and spoke with a cold calmness that could only have been suppressed anger. I learned later that my girl’s mother had just finished throwing the bedding and guest-room linen down the dirty-clothes chute, and that now the family was all ready to turn out the lights and go to bed.

But now, I had to put in a long-distance call to reach my parents, and my girl’s mother had to fish out the discarded linen and remake the guest room, for there wasn’t an extra shred of linen in the house.

Next morning the whole family arose an hour earlier than usual. Nobody talked much at breakfast. There was a hurried goodbye to my girl in the hall while her father stood nearby at the door. He took me for a chilly ride to the station. When he bade me farewell, even his hand felt limp and cold. I should have left the night before…

So on any weekend visits, be sure to consider their schedules – be as prompt in going as you were in arriving. And while you’re a guest, consider their household schedule; be there when they dine. Be out of the rooms when they clean. Don’t waste time in the bathroom if there’s a line at the door. Don’t give their servant extra work – and try never to cause extra bother.

In all your efforts to win over your girl’s parents, the most important thing to remember is that parents are people. In fact, some of the nicest people I know are parents. And when you think of your own Mother and Dad, I know you’ll agree.

You know how your own parents appreciate it when you consider their interests, their comfort, and their happiness. You know how pleased they are when you express your gratitude for what they’ve done for you.

Well, your girl’s parents are just like your parents.

Young people are often criticized for being “typically preoccupied with their own plans and interests” and for being “thoughtless and ungrateful” at times, and so any young man who promptly expresses his appreciation for hospitality and who shows his girl’s parents that he thinks in terms of their interests and conveniences as well as his own, is bound to be regarded as quite a guy.

A few weeks ago, my daughter went into New York to the theater with her friend Tom. They said they’d be home about 12:30. At 11:00 my daughter phoned to let us know that the show had been a little long, that they had missed their train, were now stopping to get something to eat, and would be home about 1:30. “Tom thought we ought to let you know so you wouldn’t be worried,” she told me. That alone was enough to make me think a lot of Tom.

What kind of a letter you write to your girl’s parents after you have spent a weekend at their home, has a lot to do with what they think of you. You can build real character for yourself by writing your girl’s mother a full and thoughtful letter which makes it perfectly clear to her that you sincerely appreciate all the things that were done to make your stay a pleasant one – and go ahead and mention specifically what those things were. On the other hand, if you enjoy the hospitality of a weekend at your girl’s home, and then just address a brief and perfunctory note to her mother, it’s the same same as saying, “Well, here’s-a-letter-I-have-to-write-and-I-want-to-get-it-over-with.” No one likes a crummy little thank you note like that. 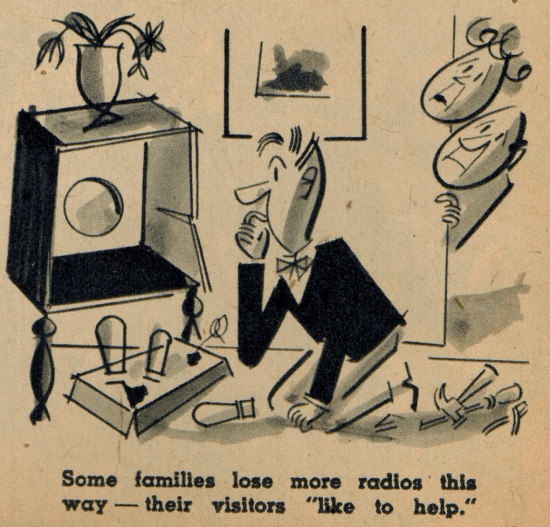 There are other little things you can do. You might want to send them a card on their anniversary, or remember their birthdays, or possibly take their picture some Sunday afternoon, or maybe offer to repair some little gadget around the house. You might even want to go so far as to offer to wipe a few dishes.

After a party at your girl’s home, you have your big chance to win her over in a hurry. It’s simply a matter of offering to clean up the place. I know it works because we’ve had a lot of parties at our house, but only once did we get the shock of an offer to clean up. It was a New Year’s party, and Joe came around and said, “It was the grandest New Year’s party I’ve ever seen. But you people have done enough. Now we’re going to help clean up the place. I’ve got a couple of the boys sweeping up the cellar right now.” You will readily understand why my wife and I will never forget Joe.

Briefly, then, let’s take a look at some of the ways in which you can win over your girlfriend’s parents:

All right, so you were born in a nice family, you did get the right upbringing, and all this is old stuff. But just think back over that last gaffe you pulled. Sure, you knew better! However, what you know isn’t so important. What counts is what you remember to use – in time!