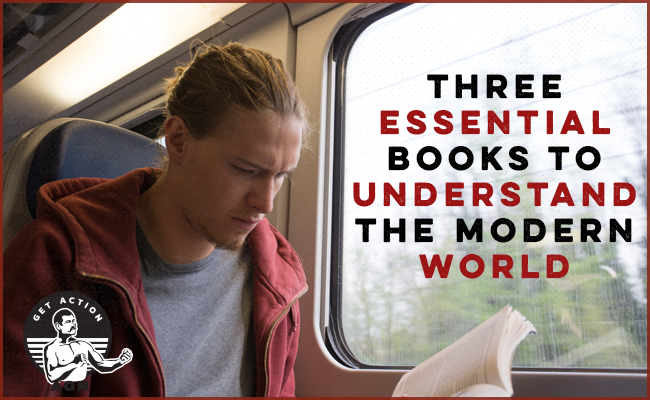 The economist Tyler Cowen describes books that fundamentally change your perspective as “quake books.” These are books that so shake up your mind, and your preexisting understandings, that you can’t view the world the same way after you’ve put them down.

Below I list three books that aptly fit this description: After Virtue by Alasdair MacIntyre, The Triumph of the Therapeutic by Philip Rieff, and A Secular Age by Charles Taylor.

What these three books have in common is that they all aim to describe and explain what it means to live in the modern world. They pull back the veil on how we got to this moment in time, unpacking the historical, psychological, and philosophical undercurrents that changed Western society and continue to drive our culture, yet typically go unrecognized. They articulate tensions that many can viscerally sense, but struggle to put into words. They try to answer questions like:

None of these books are easy reads. They are dense and have to be read slowly and deliberately, with your thinking cap screwed on tight. And even then, you’ll probably need to read them twice (or more) to grasp their authors’ arguments.

But, the effort is worth it.

While all of these books are more descriptive than prescriptive — they explain how and why the modern world is set up and experienced as it is, without offering solutions to its particular quandaries — gaining a greater conceptual and perceptual framework for understanding and navigating this often weird modern world of ours is extremely helpful. There isn’t a day that goes by that I don’t encounter something in my life that makes me think of one of these books.

“Oh, this Instagram influencer reminds me of something Rieff talked about in The Triumph of the Therapeutic,” or “Ha! This Twitter debate reminds me of what MacIntyre said in After Virtue.”

If you’ve ever felt perplexed by life in the 21st century, I highly recommend picking up a copy of each of these books. Here are some notes on why:

After Virtue by Alasdair MacIntyre 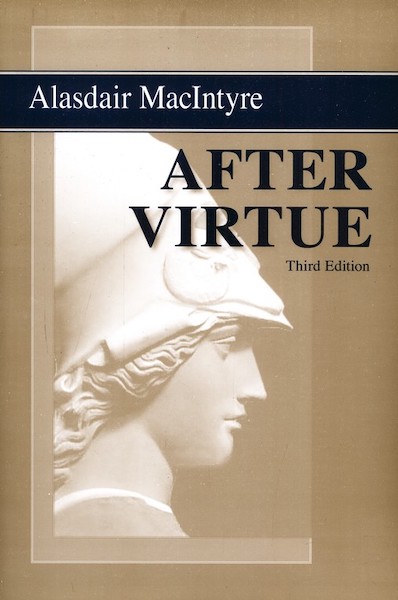 If you want to understand why modern society feels so polarized and divided, and our debates over moral, social, and political issues are so intense, all-consuming, and yet ultimately unproductive, read After Virtue by Alasdair MacIntyre.

In After Virtue, Scottish-American philosopher Alasdair MacIntyre argues that Western societies have lost a sense of a shared telos — an ultimate aim — as well as a shared language to talk about the virtues required to achieve it. Everyone’s moral code is relative, and based on individual, subjective feelings; “This is my truth.”

With neither a common telos nor a common language to discuss what constitutes the good life, moral debate in the modern West has become loud, discordant, and wearyingly unfruitful. As MacIntyre argues, without a shared framework as to what constitutes objective truth, and thus a way to resolve who is right and who is wrong, people simply shout at each other to no real end:

It is easy also to understand why protest becomes a distinctive moral feature of the modern age and why indignation is a predominant modern emotion. ‘To protest’ and its Latin predecessors and French cognates are originally as often or more often positive as negative; to protest was once to bear witness to something and only as a consequence of that allegiance to bear witness against something else.

But protest is now almost entirely that negative phenomenon which characteristically occurs as a reaction to the alleged invasion of someone’s rights in the name of someone else’s utility. The self-assertive shrillness of protest arises because the facts of incommensurability ensure that protestors can never win an argument; the indignant self-righteousness of protest arises because the facts of incommensurability ensure equally that the protestors can never lose an argument either. Hence the utterance of protest is characteristically addressed to those who already share the protestors’ premises. The effects of incommensurability ensure that protestors rarely have anyone else to talk to but themselves. This is not to say that protest cannot be effective; it is to say that it cannot be rationally effective and that its dominant modes of expression give evidence of a certain perhaps unconscious awareness of this.

The only way to win a moral debate today is to be the louder and more forceful protestor. It’s all a matter of will to power.

One insight the reader of After Virtue will take away from the book is that debates about morality are pointless if the person you’re debating doesn’t share the same telos or moral language as you. You’ll just end up talking past each other, so that the discussion goes nowhere, and everyone simply ends up feeling frustrated and filled with impotent ire.

The Triumph of the Therapeutic: Uses of Faith After Freud by Philip Rieff 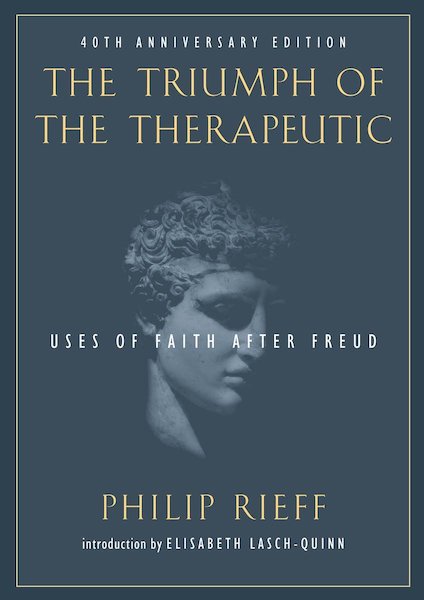 If you want to understand our modern obsession with self-care, wellness, and psychological explanations for every facet of human life, read The Triumph of the Therapeutic by Philip Rieff.

The Triumph of the Therapeutic was written by sociologist Philip Rieff in 1966. In it, he makes the case that, thanks to Sigmund Freud, the way individuals in the modern Western world find meaning has radically changed from the way our ancestors did.

Before Freud, Westerners found meaning from without. They committed to a religion, philosophy, and cultural tradition, and shaped their lives around it. People believed in the existence of an objective moral reality to which they had to conform themselves.

But modernity slowly started to call into question and erode the idea of there being a Nature with a capital N which makes demands on how we should act.

This shift naturally led to some urgent new questions: How do you make sense of yourself and the world without an absolute, transcendent purpose to order your life around? How do you get your bearings when there’s no longer a lodestar by which to orient yourself?

Freud offered an answer: lay on a couch and talk to a therapist so you can get a handle on all the conflicting desires and urges circulating in your psyche.

Instead of shaping yourself to an external moral framework, Freud argued that the best thing modern people can do is turn inward and focus on ordering the psychological maelstrom within.

While many of Freud’s ideas of psychoanalysis have been rejected by modern psychologists, Rieff makes the case that Freud’s most significant, and enduring, contribution to the Western world is the notion that we can find meaning and existential bearings through “therapies of the self.”

If you take a look at the world around us today, Rieff’s assertion feels prophetic. You see the “triumph of the therapeutic” everywhere. When books or articles make a case for developing some virtue like gratitude, courage, or temperance, they never say, “You need to develop this virtue because it’s the right and good thing to do.” Instead, the argument is couched in a therapy-of-the-self framework: “Psychological research shows that if you express gratitude every day, you’ll feel calmer, happier, and more centered.”

Despite the fact that the ethos of the therapeutic has prevailed over that of the transcendent, Rieff isn’t so sure that we’re better for it. Ironically, though we spend more and more time thinking about our depression and anxiety, we’re more depressed and anxious than ever; though we spend more and more time on “self-care,” our selves have come to feel increasingly weightless and unreal.

A Secular Age by Charles Taylor 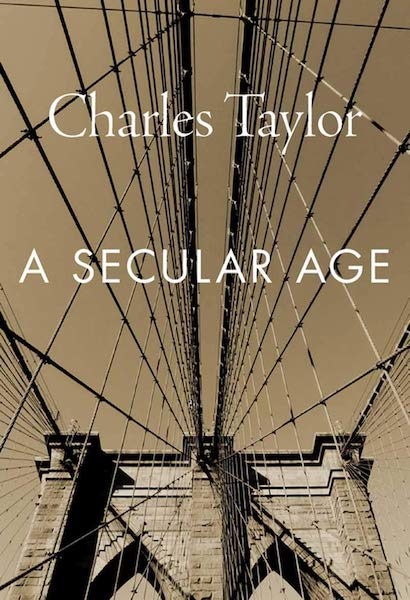 Read A Secular Age if you want to understand what it really means to live in a “secular world.”

The usual story of secularization goes something like this: Before the birth of modernity in the West, a belief in the transcendent was axiomatic. People just assumed that God existed and based all philosophical arguments on that assumption. Then, humans got smarter. We started using the scientific method to figure out all parts of life. We could show that we didn’t necessarily need to assume the existence of God to explain the existence of life or even morality. The Renaissance and the Enlightenment opened up the possibility of unbelief, and many people took up that possibility. Over the next few centuries, theism waned. Fast forward to today, and we find ourselves living in a secular society — one that is structured more by science than by faith.

But in The Secular Age, philosopher Charles Taylor argues that this common conception of secularity misses the mark.

With every idea being contested and contestable, Taylor argues that our secular age can best be described as the experience of being blown to and fro by the cross-pressures of different beliefs. We’re constantly rubbing up against philosophies, stories, and explanations — a bevy of existential options — that challenge how we understand the world. That’s true for theists and atheists, believers and unbelievers alike: the latter sometimes miss their cast-off faith, though they can’t bring themselves to re-embrace it; the former often conceptualize their faith using secular frameworks, although they don’t realize it.

Living in a secular age isn’t about unbelief; it’s about the impossibility of standing in any position without feeling the buffetings of alternative possibilities for belief.

What’s more, according to Taylor, the Renaissance and Enlightenment dis-enchanted the world. Life doesn’t have any inherent meaning. We’re just organisms made up of many cells living on a rock orbiting some star in a galaxy made up of billions of stars in a universe made up of billions of galaxies. As rational, scientific explanations have come to dominate the cultural consciousness, we’ve closed ourselves off from the possibility of being touched by the transcendent.

Yet Taylor argues that citizens of a secular age are nonetheless haunted by the ghosts of a once enchanted world. He thinks there’s something inherently human about wanting to believe in the transcendent and that we’ll find ways to scratch that itch even if it doesn’t involve embracing traditional religious beliefs. Look around at our world, and you see this transcendence-seeking everywhere. While modern Westerners aren’t going to church, they are reading horoscopes, using healing crystals, doing yoga, fasting, drinking ayahuasca, reading Jordan Peterson, harnessing Jungian archetypes, and interpreting their enneagrams. One could argue that a lot of comic fan culture is driven by the desire for the transcendent; superheroes have replaced the gods.

At 900 pages, A Secular Age is a beast of a book. If you don’t have the patience for it, I’d highly recommend reading James K.A. Smith’s How (Not) To Be Secular (you can also listen to our podcast with Smith here). Smith’s reader’s guide to A Secular Age is just 160 pages, and Charles Taylor himself praised it as “the book that I was trying to write.”