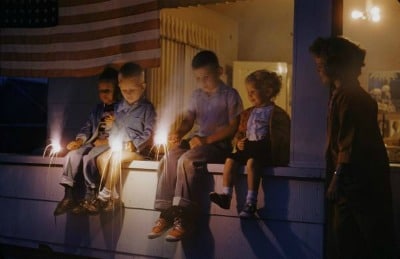 A man has a healthy appreciation for positive traditions. Traditions add rhythm and texture to our lives, bind us together with others, give us something to look forward to, and simply provide a good deal of joy and satisfaction.

When it comes to my family traditions, no day of the year is filled with more of them than the Fourth of July. My family has always done Independence Day up big, bigger even than Christmas. The day is filled with activities from morning until night; my family loves to cram as much fun as possible into the holiday. Growing up, the 4th of July created a lot of great boyhood memories, and now it’s a day I truly look forward to as it brings my whole family back together.

If you’re looking for inspiration in creating an Independence Day to remember, below I share how we do the Fourth of July in the McKay family, and the traditions–past and present–that make this holiday memorable for me. 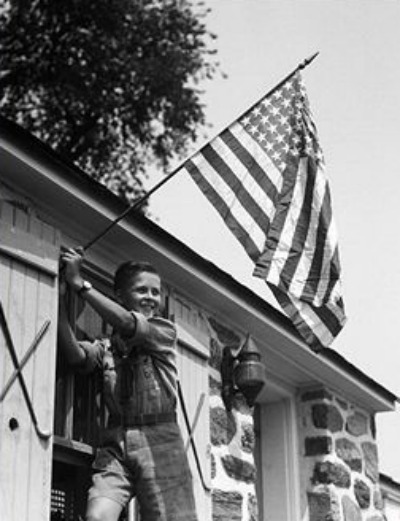 First thing in the morning we’d hang up our American flag. We didn’t do any elaborate ceremony. Just put it up, thought about our freedoms for a bit, and got started with the day.

Check out this article we did awhile back ago on proper flag etiquette.

Go to a Parade 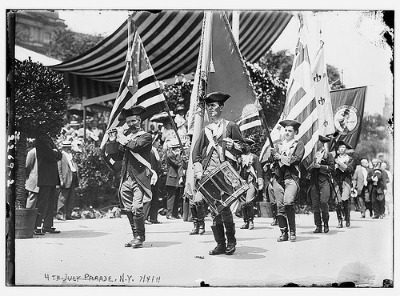 My hometown of Edmond, OK hosts one of the biggest 4th of July parades in the state. The parade hasn’t changed much in 20 years, but I still enjoy going to it. I love the sense of community when I’m standing next to my neighbors cheering on the local Boy Scouts carrying flags or watching a local children’s tae kwon do class demonstrate their board breaking skills along the parade route.  Most of the parade, however, consists of old, fat Shriners riding on three-wheelers and driving go-carts. I seriously don’t know what the parade planners are going to do when all these guys die off and no one is there to drive go-carts that look like bowling pins. Another thing I like about the parade is my sister’s homemade blueberry scones. Nothing like munching on a tasty pastry while listening to the float for a local bank blast “I’m Proud to Be an American” from their speakers.

Another favorite 4th of July parade of mine is the one hosted in Montpelier, VT. Vermont’s a weird state, and the Montpelier parade perfectly displays Vermont’s weirdness. One part of the parade will be filled with these old, Yankee farmers driving their big green tractors and showing off their milk cows; the other part will be filled with white hippie women doing African tribal dancing and giant puppets protesting consumerism and nuclear power. I love it. 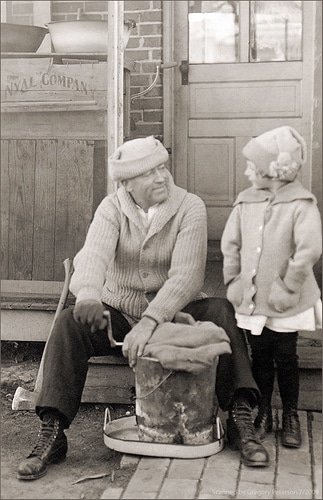 I’d like to know where you can wear a sweater and celebrate the 4th of July. Because dang, it’s hot here.

Another small 4th of July tradition in our family is making homemade ice cream. My mom would always pull down the ice cream maker and let us kids help her put in the ingredients for some tasty vanilla ice cream. Here’s her recipe.

Pour cream directly into cream can. Add sugar, vanilla, and salt. Stir with a wooden spoon or plastic spatula until the sugar is dissolved. Churn until creamy. 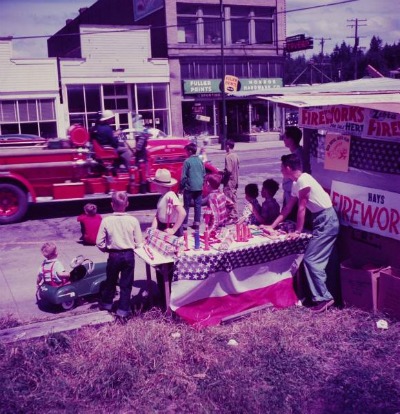 After the parade, my friends and I would head over to the fireworks stands. As I type this, I can smell the wonderful aroma of black powder permeating from plywood shacks. As a kid, I remember being overwhelmed by the selection. Black cats, jumping jacks, smoke bombs (especially the ones that look like grenades), and M-80s were my go-to fireworks. My friends and I were very strategic about what we bought. We’d get a few of the fun things like tanks and smoke bombs, but most of our purchasing power was directed towards fireworks that could be used to blow stuff up. I’m a grown man now, but I’m still a sucker for a trip to the fireworks stand, and of course, blowing things up.

For more info about fireworks, check out this guide to fireworks we wrote up a few years ago. 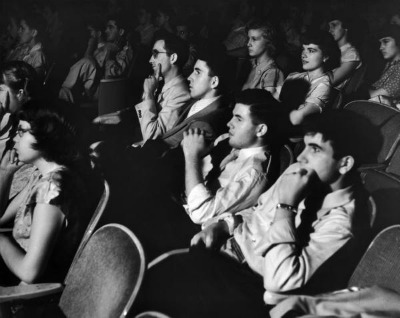 After sufficiently stocking up on fireworks, we head over to the movie theater to take in a fun, summer blockbuster. Fourth of July has historically been the day film companies release some of their biggest and most action-packed movies. I can still remember many of the movies I went to see on the 4th of July. The best one by far was Indiana Jones and the Last Crusade, 4th of July 1989. We named the dog Indiana…

A recent addition to our family’s 4th of July traditions is my sister’s homemade root beer. It’s super easy and the little kids seem to enjoy helping make it.

Place 4 gallons of the cold water in a large container. Add sugar and stir until dissolved. Pour in root beer extract and mix. Add the dry ice and put the lid on loosely so the gas can escape. Let it “brew” for about 15 minutes. Add the last gallon of water and let brew for another 15 minutes.

Have a Block Party 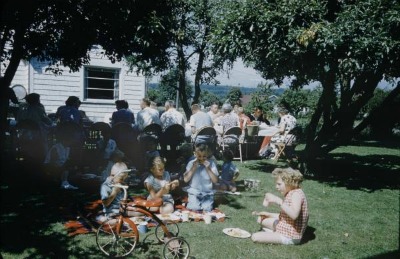 Growing up, all the neighbors on our street would get together for a block party. All the dads would bring over their grills to our house along with coolers of meat and beer, the moms would bring salads and desserts, and the kids would have water balloon fights and light some fireworks. We’d stuff our faces with all the hot dogs and potato salad we could eat. Sadly, the yearly Fourth of July block party faded away as neighbors re-located and kids grew-up. Do people still have block parties these days? I hope so.

Light Up the Grill 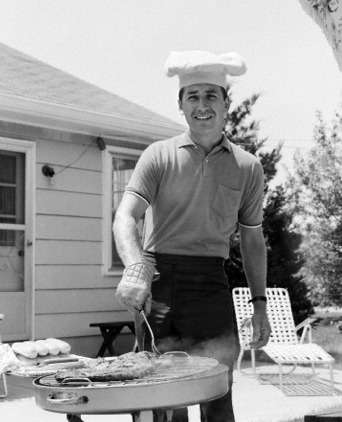 With the neighborhood 4th of July block party a thing of the past, my family now has an annual cookout at my parents’ place. My sister and her family will make the trek from Denver, and we’ll occasionally have some extended family join us. My mom and dad make quite a spread for us every year: burgers, dogs, brats, baked beans, potato salad, and other delicious summer delectables.

For advice on summer grilling, check out the following resources: 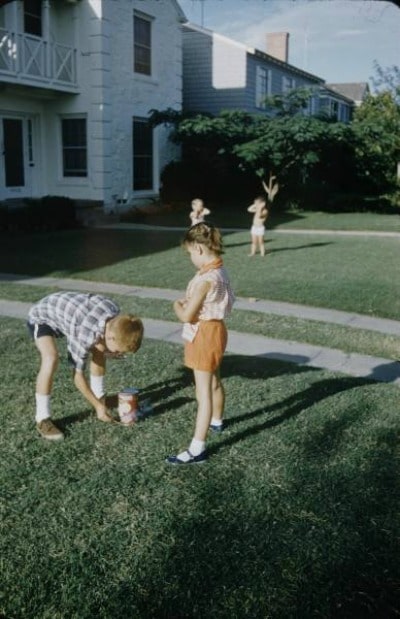 After the sun set, the parents would take the kids out to the fields behind our houses to light fireworks. The fields were full of these small ravines, and I remember I’d jump across them after I’d light a string of black cats and imagine I was Indiana Jones escaping an army of gun-firing Nazis.

We’d also make sure to bring old toys with us to serve as effigies that we’d blow up in sacrifice to the gods of the Fourth. As we got older and the watchful eye of parents left us, our pyrotechnic plans became more elaborate and dangerous. I’m still surprised no one ended up in the hospital. 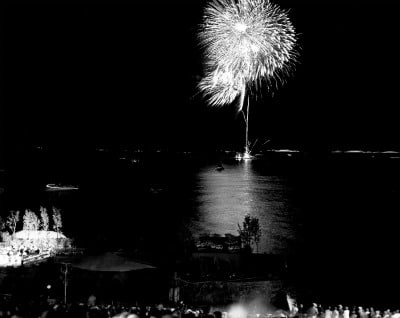 After shooting off our own fireworks, we head over to the local university to watch the big, elaborate fireworks display. I love sprawling out on the grass with my hands behind my head and watching the loud bursts of color explode in the sky. It’s the perfect way to end a day full of food, family, fun, and patriotism.

What are your favorite 4th of July Traditions? Share them with us in the comments!