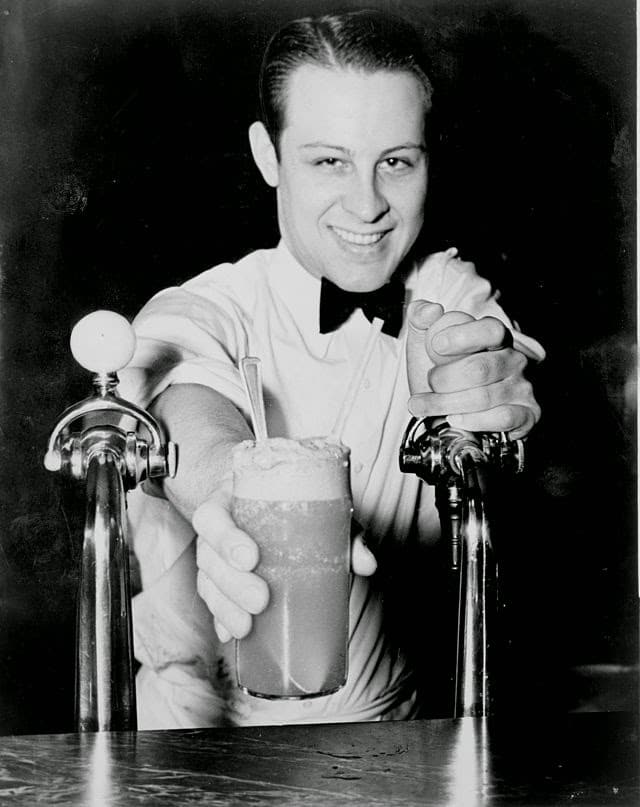 During the early 20th century, nearly every block in New York City had a candy shop; Brooklyn alone had 560. While we often think of candy shops as kids’ hangouts, back then, they were community gathering places where everyone in the neighborhood would meet up. In addition to selling sweets, they usually included telephone booths, a newsstand where men would read the papers and chew the fat, and a soda fountain where city dwellers could refresh themselves with a cold glass of something bubbly.

One of the drinks that was often slid across the counter of these oldtime soda fountains was the chocolate egg cream – one of the Big Apple’s most iconic and nostalgic drinks. 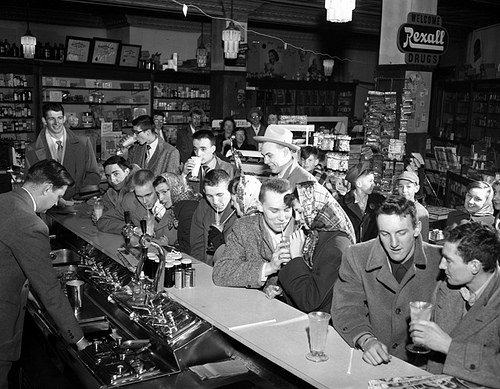 The oft-cited irony of the egg cream is that it contains neither eggs nor cream. It is in fact a simple mixture of just three ingredients: milk, seltzer water, and chocolate or vanilla syrup. How it got its improbable name, and was invented in the first place, is the subject of much debate.

The egg cream was almost surely the creation of NYC’s Jewish immigrants, and its most commonly cited inventor is Louis Auster. Auster is said to have served the first egg creams in the 1890s from his Brooklyn candy shop. From the very beginning the drink lacked cream and eggs, and it was an instant hit; on a hot day, he would sell up to 3,000 of them to thirsty customers. Auster would make the syrup in the back of his store with the windows blacked out, and his secret recipe went with him to the grave.

Retired professor of sociology Daniel Bell disputes this claim, and argues that his Uncle Hymie invented the egg cream in the 1920s at his candy store on the Lower East Side. As Bell’s story goes, regular chocolate sodas (consisting of just syrup and seltzer) were already popular at the time, and his uncle liked to make his with a scoop of chocolate ice cream on top. As the ice cream melted, the drink would become too rich, and he’d add some more seltzer to it. He then struck on the idea of making a similar drink with real cream, chocolate syrup, seltzer, and eggs (many soda fountain drinks actually contained raw eggs at the time). The drink was a big success, and was copied by his many competitors. But when the Great Depression hit, these rival soda jerks saved money by removing the eggs, substituting milk for cream, and cutting the price.

If Bell’s account is true, the name “egg cream” arose quite naturally from the concoction’s original ingredients. For those who believe the drink originated with Auster, and excluded real eggs and cream from the start, other explanations for its deceptive moniker are floated. Some say the name was developed from the white, foamy “head” of the drink, which vaguely resembles beaten egg whites. Others trace the name to Jewish actor Boris Thomashevsky, who had enjoyed a chocolat et crème while visiting Paris and asked Auster to make him something similar when he returned to New York. With his Yiddish accent, his requested drink sounded like “chocolate egg cream.”

However the drink came to be, the egg cream became enormously popular and spread throughout the city. As Elliot Willensky writes in When Brooklyn Was the World: 1920-1957, “a candy store minus an egg cream, in Brooklyn at least, was as difficult to conceive of as the Earth without gravity.”

Although the origins of the egg cream remain a mystery, its disappearance from the beverage landscape is not. In the 60s and 70s, the rising availability of bottled, canned, and vending-machine-dispensed pop pushed soda fountains out of business, and with them, the egg cream.

Egg creams can still be had at some spots in NYC and along the East Coast. But they’re not very well known outside the Northeast. Having grown up in Connecticut and New Jersey, Kate had imbibed a few in her childhood, but I didn’t have my first until a few years back when I ordered one at a diner in Vermont.

The other day I had a hankering for a good old fashioned egg cream, and wanted to see how my 3-year-old, already a fan of chocolate milk and stealing sips of our sodas, might like it. Sweet and lighter than a full-on milkshake, it makes for a refreshing summer drink. So I started experimenting and trying my hand at making my own.

How to Make an Egg Cream 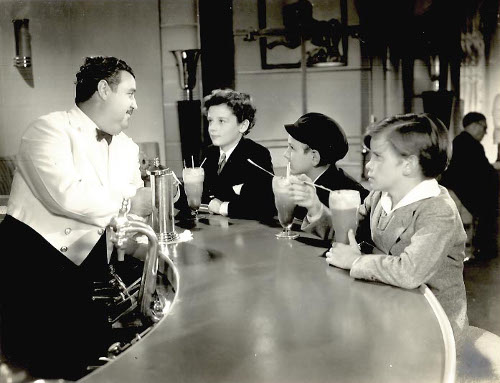 The basic recipe for egg creams could not be simpler: milk, seltzer water, and chocolate or vanilla syrup. But the proper ratio and order of the ingredients is debated amongst New Yorkers just as much as the drink’s origins. In the Bronx, the seltzer is added after the syrup, giving the egg cream a brown head of foam. In Brooklyn, the foam is always white – the result of putting in the seltzer before the syrup. Since Brooklyn is the concoction’s most likely birthplace, I decide to make mine that way, and used the directions offered by Jay Keller, who passionately argues that this is the one and only “real” way to make a NYC egg cream. 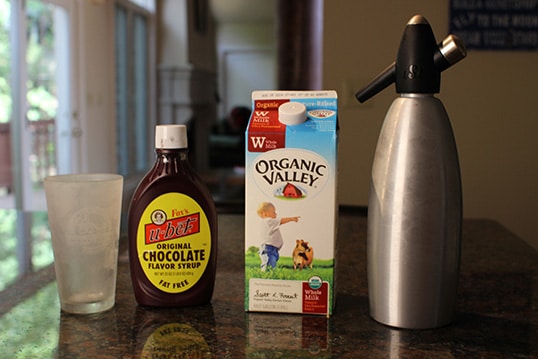 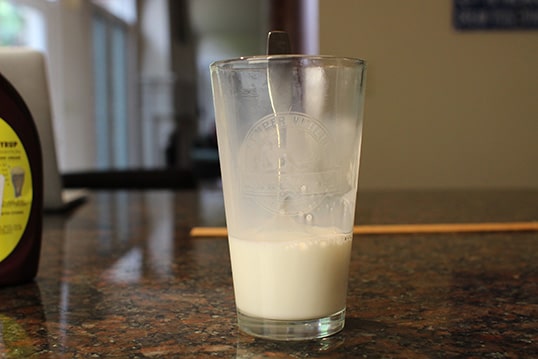 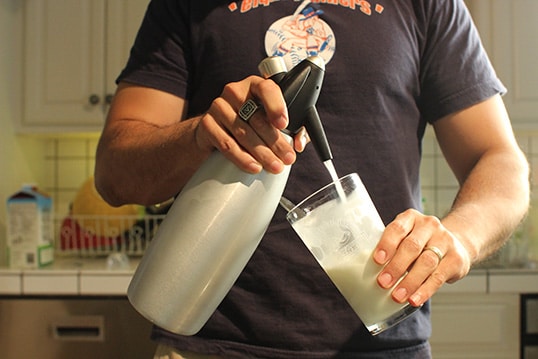 2. Tilt the glass and hit the the bowl of the spoon with the stream of soda from your soda siphon. Fill with seltzer until the milk/seltzer mix reaches about 1 inch from the top of the glass. 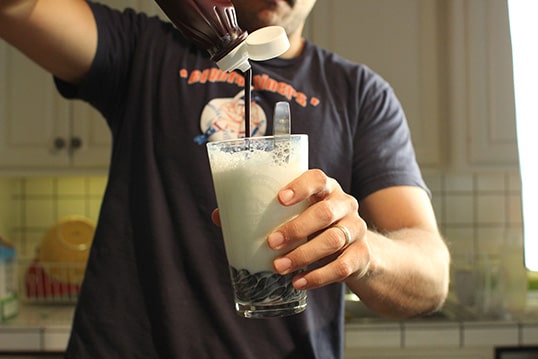 3. Squirt syrup through the center of the glass until the milk/seltzer reaches the top of the glass. I probably added a little too much syrup here — experiment to find the ratio you like best. 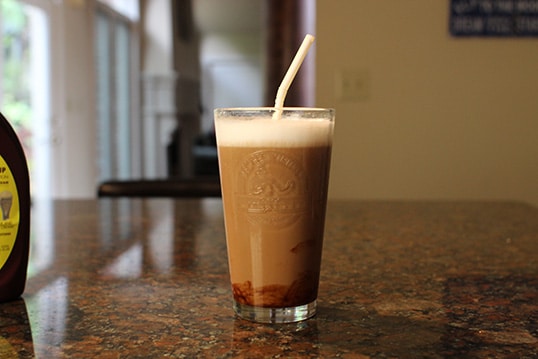 4. Mix the syrup with the spoon, keeping the bowl of the spoon at the bottom of the glass. You should end up with a brown/chocolate bottom, and a white foamy head. If you did it right, the straw should stand straight up on its own. Enjoy!

This egg cream turned out to be delicious – even better than the VT diner one I think. Gus gave it a big thumbs up too. I’m sure I’ll be whipping up a bunch more the rest of the summer.