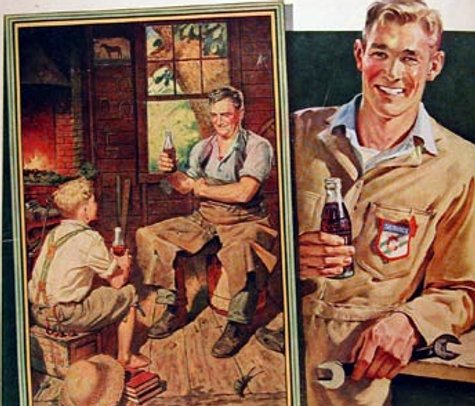 In celebration of the Art of Manliness’ love for the finely crafted, independently made soda, today we return to our soda reviews. Last time, we had the pleasure of reviewing some of the best root beers in the land. Many, many commentors raved about one particular brew that we had left out: Virgil’s.  We couldn’t find a Virgil’s root beer to taste at the time of the review but later got our hands on some. And we can now confidently declare that our readers were absolutely right: Virgil’s is the king of the root beers. It now reigns as our favorite.

Today we tackle the soda that launched a thousand bottles: cola. Of course the granddaddy of them all is Coca-Cola, invented by pharmacist John Pemberton in 1866. The “cola” of that concoction came from the tropical, caffeine containing kola nut, while the “coca” was famously derived from extracts of coca leaves. The fizzy fountain drink was advertised as curing a wide variety of ailments, but its delicious taste and savvy marketing are what rocketed it into the beverage stratosphere.

Sadly, along its way to world domination, Coke committed soda sacrilege and left the pure cane sugar fold for dreary high-fructose pastures. And you know what they say about high fructose corn syrup, don’t you? Yeah, that it doesn’t cause the pancreas to produce insulin, meaning the hunger signal to the brain doesn’t get shut off as quickly and we eat more without feeling as full.

So today it is up to the smaller soda brewers to carry the cola banner forward. And in our continued hopes of turning soda connoisseur-ship into a widespread movement, we pit these colas against each other. The requirement for inclusion in the taste test was for the cola to come in a bottle and be made with pure cane sugar goodness or other natural sweeteners. (Yes, yes my health-food friends, I know sugar’s no good for you either….soda should be enjoyed as a treat, not by hooking yourself to a daily Big Gulp IV).

I know that in our effulgent praise for cane-sugar sodas over their degenerate HFCS brethren, some readers might think we’re too zealous, that you really can’t taste the difference between the two. But au contraire my ambivalent friends. We actually conducted a completely blind taste test awhile back in which we presented regular HFCS Dr. Pepper and Dublin Dr. Pepper (which is made with cane sugar) to 12 individuals. The results? Of the 12, 1 preferred the regular, 1 had no preference, and 10 preferred the cane sugar variety. So trust us….seeking out the best  the soda world has to offer is quite worth it.

Now on to the taste test! Let the best fizzy beverage win! 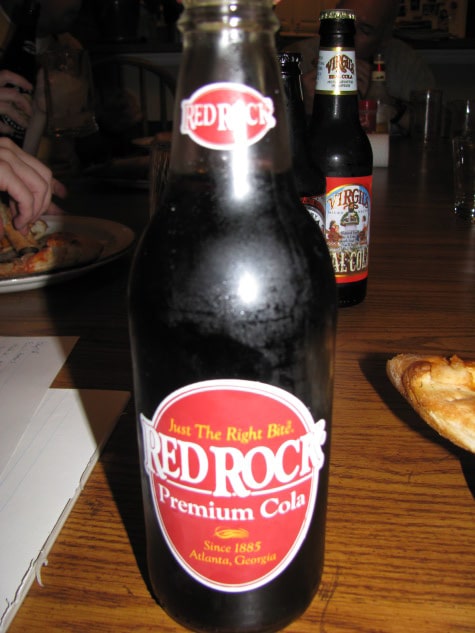 Made in: Atlanta, Ga

Our review: It  must be hard sharing a hometown with a 800 pound cola gorilla for competition, but Red Rock cola ain’t half bad. Not too fizzy, with a smooth flavor, and just the right amount of cola taste. Very RC Cola-esque in flavor. 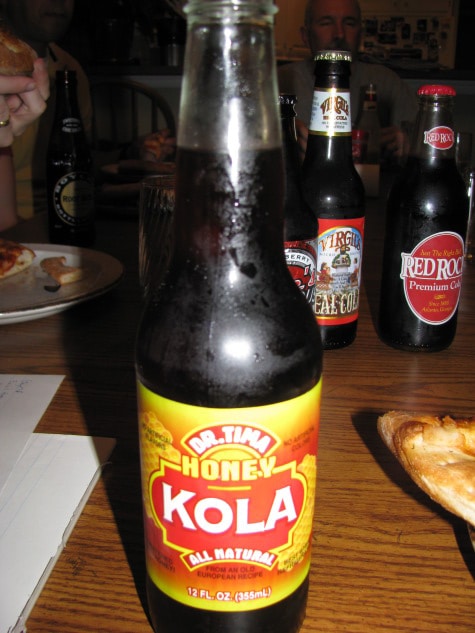 Made in: Beverley Hills, CA

The bottle says: “From an old European recipe”

Our review: Leave it to the folks in Beverley Hills to throw something fancy like honey into the mix. I’m not sure how old their “old European recipe is,” but it seems the years have evaporated all the flavor right out of it. This cola didn’t really taste like anything at all; it was exceedingly bland. While it had a nice level of fizz, the honey flavor was subtle and it was described by one taster as “coke and waffles.” I wonder what Dr. Tima does when she’s not making cola? Face lifts? 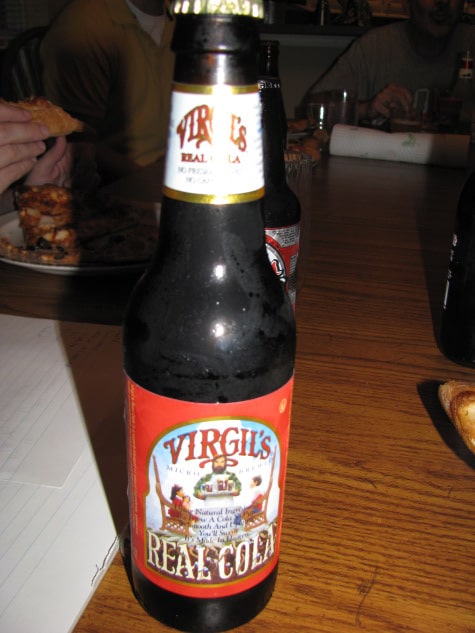 The bottle says: “Using natural ingredients, we brew a cola so pure, so smooth and uplifting, you’ll swear it’s made in Heaven.”

Our review: That’s a pretty heady claim Virgil’s makes on the bottle, but fortunately, they’ve got the cola to back it up. While a few tasters found the cola “too fruity” in flavor (it is indeed made with lemon, lime, and orange oils), most loved the robust, complex taste. With notes of vanilla, cinnamon, nutmeg and clove, the cola smelled as good as it tasted. Just the right amount of fizz was the icing on the cake. 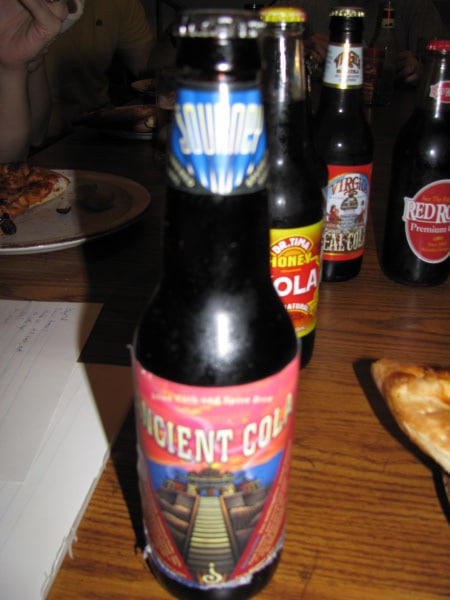 Our review: We’re always pulling for anything coming out of the great state of Vermont, but sadly, just like Journey’s root beer, this cola simply didn’t deliver in the taste department. While there was a dissenting taster who enjoyed the cola’s cinnamony notes, the others thought it tasted ancient–like it had forever been sitting in the pyramid featured on the bottle. Too much fizz, too much sweetness, and not enough taste. 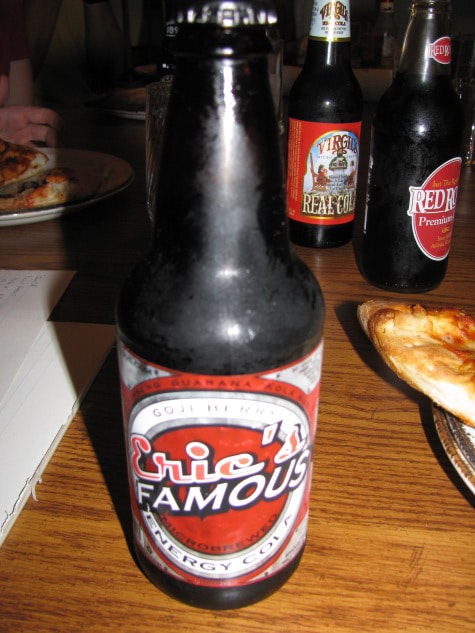 Made in: Mill Creek, WA

Our review: Eric Famous split our panel, with half digging it and half not. The cola taste is not very strong, and instead fruity and vanilla-y notes dominated.

The bottle says: “Microbrewed with 100% natural ingredients, this “feel good” diet cola will give you a natural lift.”

Virgil’s diet cola is an even rarer species than soda made with cane sugar; it’s a diet soda made with all-natural sweeteners like the herb stevia. After our experience with Virgil’s root beer and regular cola, we were prepared to love anything coming out of their magical microbrewery. But alas, Virgil’s diet cola is not worthy of the name. Incredibly bland, and lacking any discernible cola flavor, the soda tasted weirdly fruity and rather odd. Labeled on the bottle as a “dietary supplement,” the cola is infused with herbs like gingko, ginseng, and hibiscus. If you’re looking for a dietary supplement, best to take a multi-vitamin and stick with drinking their hard stuff. 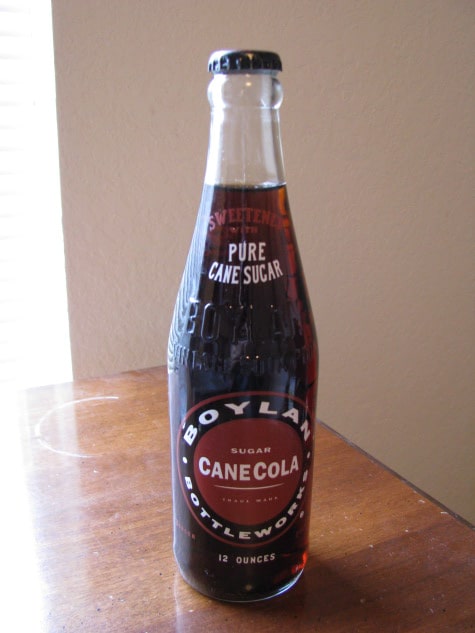 Boylan’s bottle says, “Burger Deluxe” in small print on the bottle. I’m not sure what it means, but if they’re saying that their cola would make an excellent accompaniment to a tasty burger, than I back them 100% in the claim. Boylan’s has a supremely smooth, almost velvety flavor. It’s just the right amount of sweet and its refreshing fizziness is invigorating.