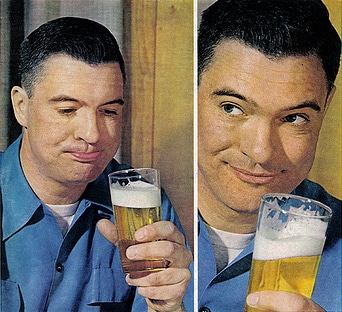 Editor’s note: This is a guest post by Tim Akimoff.

It could be said that beer was the downfall of the hunter gatherer, the man of the woods, mountains and streams, the man with spear in hand whose need for meat was matched only by his need for shelter. After all, it was likely the propagation and harvest of the materials required to make beer that caused the famous bipedal wanderer to settle in one location. Or, you can think of it like this: Beer changed the world.

Whatever your view of history, that fermented juice of water, barley, hops and yeast certainly played a big role in it.

Whether consumed from a tall can, a frosty mug or a pint glass, gulped by sailors or sipped at baseball games, men and beer have a long history together. Let’s start with that history and then move into how modern man can more fully enjoy this ancient brew.

A Brief History of Beer 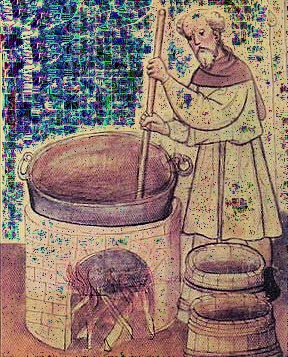 We’ll start this story after the last ice age, at a time when mans’ domain shrunk like the ice bridges between what would become Asia, North America and Europe. No one really knows how it happened, only that somewhere in the cradle of civilization some bread or cake made of barley must have fallen into water, where it germinated, providing the sugars necessary for conversion to alcohol, a process that was likely helped out by the sun and whatever wild yeasts happened to be floating through the air. How a person would have known to drink this gift of the gods remains a mystery, but the process of brewing beer was born.

Early history saw the production of beer become the domain of woman, whose duty it was to produce strong ales in order to keep her family alive during decades of plague, famine and unsanitary drinking water. As large swaths of humanity were wiped out from devastating disease in the Middle Ages, the religious orders picked up beer making, which turned the practice into a communal activity complete with the very first beer halls. Because it was profitable and in high demand, men became the principal brewers in each community.

Naturally, when kings realized the profits available from the production of such a simple recipe, they moved to control the grains used in brewing and fought ferocious battles over production and distribution. The state breweries were born.

Beer found its way to the New World aboard the ships of early explorers. The crew of the Mayflower abandoned plans to sail further south from Plymouth Rock after they realized they were low on beer.

The crafting of fine ales in the New World enjoyed a bit of a renaissance in the early years as few restrictions were placed on brewers.

As the nation grew, Czech and German immigrants brought their Pilsner-style lagers with them, and American breweries looking to sell beer beyond their small communities adopted the new style for its storage and mass production qualities. The American light lager was born, and names like Miller and Schlitz became known in households across the country.

Then came the temperance movement, the aim of which was to shut down the production and distribution of alcohol in order to curb sinful and criminal behaviors. More breweries closed in the wake of this thinking than did when Prohibition was ushered in fully. In the Great Depression and World War II and the years that followed, the reintroduction of beer to American households took the form of light lagers brewed with corn. This mass-production beer would travel well and store for long periods of time with little cost. Miller, Coors and Budweiser ruled the roost. Prohibition officially ended in 1933, though many restrictions still limit the craft brewing industry to this day.

The tide turned in the 1970s as homebrew fever spread across the land. Men who had tasted good foreign beers during tours of duty in Europe, Korea, Vietnam and in military service around the world could not find those styles in their hometowns, and so many took up home brewing. Some started small breweries and many ventures failed until laws were changed and brewing as a business became easier in the mid-80s.

Today, there are more than 1,390 regional craft breweries, microbreweries and brewpubs in the United States, according to the American Brewer’s Association. And the variety of styles available is nearly incomprehensible.

Jumping into the World of Craft Beer

Recently I walked into a craft brewery in Stevensville, Montana, where a dozen men at the bar sat decked out in the mottled browns and crusty grays of ranchers and farmers. Grizzled men with facial features worn like the crags on the nearby Bitterroot Mountains. I asked the bar tender why they were all drinking dark beer, unfamiliar as I was with the sight of men of the land drinking anything but Coors or Bud Light.

The bartender gave me a knowing look and told me she’d trained them up on a light, blond ale and moved them to an even amber and eventually to the brewery’s signature Black IPA, perhaps the strongest of popular beer styles today.

“You only opened four-months-ago,” I said, incredulously.

She winked at me and smiled.

There has often been an unfortunate association between beer and low brow masculine behavior; it is after all the go to beverage for guzzling through a funnel or imbibing via a keg stand. But like fine wine, as one learns to appreciate the basics of beer, the core ingredients and the role they play in flavor and experience, one is prone to move up the taste scale and into a world of unimaginable flavors where it becomes enjoyable to sip and savor rather than guzzle.

What Is Craft Beer?

Beer is grain, water, yeast and hops. The grain is heated in water and the starches converted to sugars. The resulting sugar water is eventually boiled to get rid of contaminants. At or near the end of the boil, hops, the flowers of a certain vine, are added to create a bitter balance to the sweetness leftover from the grains. This is then cooled and yeast is pitched and shaken to create a fermentation whereby the yeast digests the sugars and spits out alcohol. Each stage of this process creates different flavors. Grains can give off grassy, roasted or sweet flavors, while hops create bitter, floral and citrusy characteristics. Yeast provides earthy and bready flavors in some beer varieties, and the resulting alcohol adds certain characteristics like heat to the mixture.

Below I offer a brief introduction to several varieties of craft beer and recommend a few specific brands that you may want to try as you explore the world of craft beer:

The majority of craft-brewed beers are ales, and there are numerous styles within that category, including pale ales, brown ales, porters, stouts and hefeweizens. Ever wonder why some servers put a big wedge of lemon or orange on the rim of those cloudy looking wheat beers? The German-style hefeweizen, a beer brewed using wheat, was originally brewed using a European yeast strain that offered a citrusy breadiness to the beer. American brewers like Kurt and Rob Widmer, who brewed the original American-style hefeweizen, used typical craft brewer hops like Cascades, which gave a bigger citrus characteristic to the beer, and which actually goes well with a lemon on the rim. The general rule here is don’t add a lemon if you’re not drinking a Widmer Hefeweizen. Here are some example of some popular ale styles:

Lagers are bottom fermented as opposed to top-fermented ales. They often sit for a longer period of time than ales, which can go from production to bottle to shelf in a matter of weeks. Lagers are generally smoother than ales with fewer taste variations. If you currently drink Coors, Bud or Miller, you are already familiar with the lager family. There are many wonderful versions of craft brewed lagers, and they can make a great entry point if this is a style of beer you really like.

Beer with Body and Soul

Brown ales, porters and stouts, while produced year round, can also be called seasonal beers brewed for fall and winter. These can offer a more robust taste experience through the use of roasted grains, more hops and higher alcohol content.

The Big Leagues of Beer

If you drink wine, think about India pale ales as the Zinfandels of the beer world. It’s a big, bold beer with nothing to hide, and which might actually overpower many other beers or food choices. India pale ales got their name and design when England colonized India and needed to make stronger beer that would last the long sea voyage around the horn of Africa. Additional hops were used along with a higher alcohol content to preserve the beer. A good West Coast IPA will be overbearing to someone who is used to the East Coast or even English-style versions of the beer. But the West Coast IPA, originally developed by brewers in Oregon, Washington and California, has certain attributes that come through when you familiarize yourself with the style. Flavors like grapefruit, pine and resin dominate, and strong floral scents often overwhelm the nose on this style of beer.

Barrel-aged bourbon beers, sour beers, India brown ales and blended beers are a category unto their own and should wait for another post.

The best advice anyone could give on learning all that the craft beer world has to offer is to simply recommend picking a point and jumping in. Running up the taste scale is not a bad way to educate your palate about beer, but you may jump in at any point along the way and find that you like the beer. The main point is to jump in somewhere!

What are your favorite craft beers? Share your recommendations in the comments.