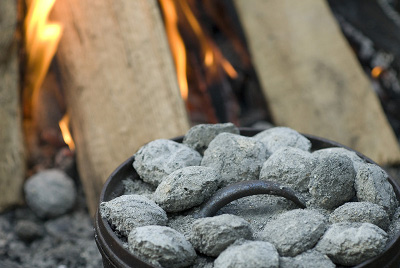 Outdoor cooking is part of the curriculum for Manliness 101. Anyone can cook on a range top or oven in the comfort of a kitchen. But whipping together a chocolate cake for a birthday and baking it in a Dutch oven…that’s impressive, and unforgettable for the birthday celebrant.

Ultra-light camping has its place; hiking 50 miles in 5 days carrying a 35-pound backpack necessarily means dehydrated food and going without some of the daily staples. Backpacking is awesome when you want to really get away from civilization and do something more rustic.

But with gas prices as they are, more people are choosing to camp close to home — out of a car, truck, or small trailer. Car camping is great for when you only have time for a short trip and are looking to do something less Spartan and more relaxing. What’s great about car camping is that it allows you a lot more variety in what you can make for your grub, which, as any camper knows, is one of the best parts of camping. Food just tastes better when it’s made and enjoyed while you’re out in nature.

There are essentially two ways to bake in the great outdoors: reflecting heat from a campfire into a reflector, creating an oven, and trapping heat in a cast-iron Dutch oven by applying heat in the form of coals directly to the surface of the oven. Both have advantages and disadvantages and today we’ll give you a primer on each method. 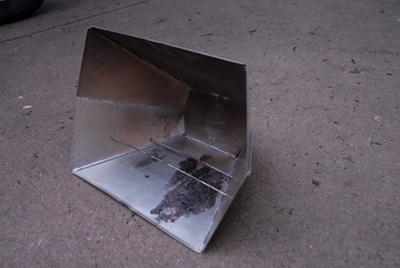 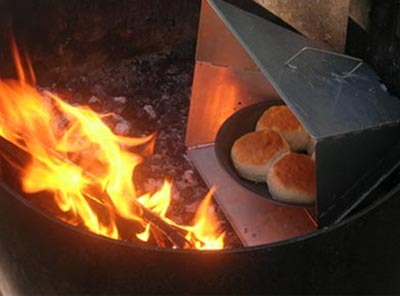 Stand too close to a campfire and you’ll feel your shins toast a little. That’s radiant heat — the basis of reflective oven cooking. The basic idea here is simple: focus the heat where you want as evenly as possible.

A well-designed reflector focuses the heat evenly on the top and bottom of the pan holding your food. Otherwise, your oven will bake unevenly (horribly, actually), as if your oven at home lost one of the elements; you’ll get a burned top and a raw bottom. 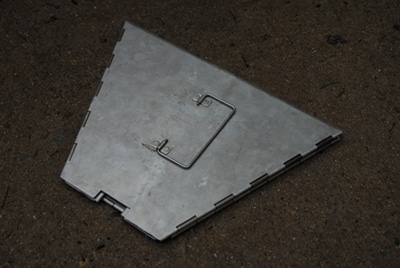 Folded down flat, a reflector oven takes up little space.

A benefit of the reflector oven is its weight and compact size. A reflector oven doesn’t weigh very much, and when folded down flat, it takes up little space. So for those sensitive to weight and size, a reflector’s a good choice. Canoe campers can carry more than backpackers, so we who camp out of canoes love these.

For the best baking, I like to take well-burning logs and put them up on their ends, leaning against a support of some sort, often the inside of a fire ring if it’s large enough. To judge the temperature, hold your hand right in front of the oven and count rapidly…onetwothreefourfiveOUCH. The ouch at five means you’re at 350-375 degrees. An ouch at four is about 400-425 degrees. Three means charcoal for dinner. Despite the best intentions, there are hot spots, so use some tongs to rotate the pan periodically, or when you see a hot spot start to form.

You’ll notice I haven’t mentioned any specific foods. That’s because you can cook anything in the reflector oven. The longer you need to cook an item, the more you have to plan ahead for maintaining the fire to keep the heat relatively consistent. I’ve baked lasagna, broiled vegetables, and baked cinnamon rolls with a reflector oven.

The key to this is practice. Don’t expect to make a Baked Alaska your first time out. Start with simple baked goods. If we’re camping with the kids, we often use the frozen rolls in a tube so the kids can participate. The bake time is quick and the odor will often draw in other kids who want some too.

Perhaps more familiar to the average person, the Dutch oven is ages old in one form or another. The cast iron flat-bottomed pot with small feet to elevate it off the hearth and the recessed lid for holding coals is iconic. Cast ironware was so valuable in the original 13 colonies that it was often listed specifically in a person’s will. The reason the Dutch oven has endured is because it works…and lasts. And lasts. And lasts.

Like a reflector oven, there’s nothing you can do in a regular oven that you can’t do in a Dutch oven. It will take practice and a few semi-burned dishes, but persist and you’ll make it. The trick to getting started is heat regulation. While expert chefs can cook with any fire source, beginners should start with charcoal briquettes. 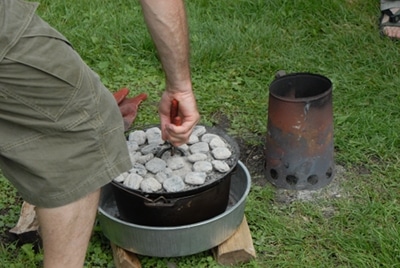 You’ll want a pair of big pliers as well as a lid lifter. 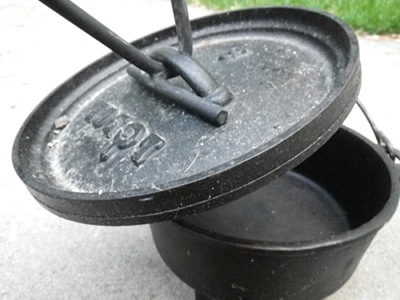 The lid lifter in action.

You will have to replace briquettes as they burn down, of course, and a pair of tongs are critical to avoid burns and to keep control of your heat.  You will also want a pair of big pliers as well as a lid lifter.  I also use a pair of welding gloves and a small trowel if I’m cooking with coals from a fire rather than briquettes. 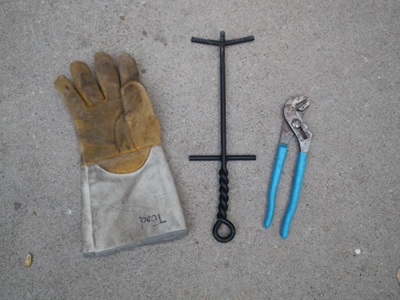 A properly seasoned cast iron Dutch oven has amazing non-stick properties. Most cast iron cookware comes pre-seasoned from the factory, but you still want to do your own pre-seasoning and maintenance.

If your cast iron is new and unseasoned, you’ll know it. It will have a rough, dry feel and it will look like anything will stick to it. Wash your oven with hot water and soap (the one and only time you should!) and coat it with vegetable oil (canola works great). Olive oil doesn’t work; I learned the hard way. Put your Dutch oven on a cookie sheet in a conventional oven set to 250 degrees and let it bake for an hour or so, then turn the oven off and let it cool. Wipe off any excess oil and you’re ready to cook.

With the exception of a brand new oven, do not use soap on your oven, ever. It removes your hard-earned seasoning. If your oven is properly seasoned, you won’t need it. Just wipe it out with paper towels or scour it with sand if available. The more you cook fatty foods (bacon, frying of any sort, etc.) your oven will self-season. Acidic foods like tomatoes or beans can remove seasoning, so you’ll have to season it again.

One of the things that can lure me to a rural barn sale is the prospect of picking up some cast iron for a song. I’ve found Dutch ovens and frying pans that are so old the person at the yard sale can’t remember if it was Grampa’s or Great-Grampa’s. It just doesn’t wear out. Even if rusty, you can bring a Dutch oven back to life with a good scouring with a steel wool pad, lots of soap and water, and then a seasoning regimen that’ll make it good as new.

On your next camping adventure, why not experiment a little with baking? Rolls, cobblers, bannock breads, or biscuits are good starters. I’ve included a few recipes and instructions for the easy things to get you started. There’s nothing quite like cooking a pan of sweet rolls in an reflector oven after dark, or turning a pineapple upside down cake out of an oven onto a plate. Be sure to wear a “Kiss The Cook” apron.

Mix dry stuff together. Add wet stuff. Mix it all and pat it into the bottom of a well-oiled Dutch oven. Bake until done, usually between 12-15 minutes.

Alternatives:
Mix in a teaspoon of thyme, rosemary, or any other favorite herb for herb-flavored biscuits.
Sauté onions, parsley, or any other small vegetables and fold them into the crust for a more savory biscuit.
Lay a few pieces of bacon on the bottom of the pan and cook for a few minutes, then put the biscuit dough on top and bake normally. The bacon gets crispy and the biscuits are infused with that wonderful smoked pork smell. Not for vegans. 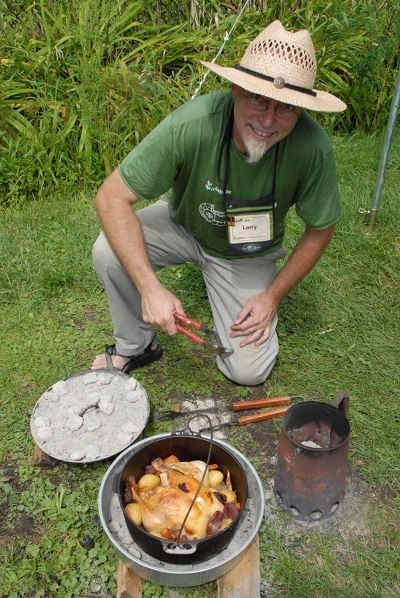 This is not a recipe, it’s a guideline. Put a little oil in the bottom of the oven, add a chopped onion and whatever you want to add. Add a cup of water or broth, a can of tomatoes, and a chicken. Cook it until the chicken falls apart. That’s the idea behind most Dutch oven cooking.

3 fist-sized potatoes, scrubbed but not peeled
1 small onion, diced
3-6 strips of bacon, sliced into squares. Bacon lovers can go up to 10.
1 tsp rosemary or thyme, depending on your tastes
1/2 tsp salt
1 tsp black pepper

Dice the potatoes into cubes about 1/4-3/8 inches square and set aside.  Put the bacon in the oven and saute until it’s soft but not brown.  Add the onion and saute until it’s a little golden and translucent.  Add the potatoes and the spices, and stir until it’s amalgamated. If you were skimpy on the bacon you might have to add a little oil.  Cover and bake for 10-15 minutes, open and stir it.  If it seems a little dry, add a few tablespoons of liquid–some recommend beer.

Cook another 10-15, but watch it.  It’s done when you want to eat it. If you want it crispier, cook it longer.  Again, coals on top are more important than the bottom.

Small Tip: You can prepare the bacon ahead of time by rolling strips into small rolls that you can freeze individually.  Makes it easy to grab what you want.

1 (18 ounce) box yellow cake mix
Eggs and oil as dictated by the cake mix
For the liquid called for by the mix, do not use water, use the pineapple juice from the can.
1 c. brown sugar
1/2 a stick of butter.
1 can of pineapple, sliced or crushed.  I like crushed, but drain it well.

Melt butter in the bottom of the oven.  If it smokes a lot or browns quickly, pull it off the heat a bit and add the pineapple. Prepare the mix as directed, but add a few tablespoons less juice than the recipe asks for as there is a lot of liquid in the pineapple.  Bake until done: it should be about the same time as a regular oven, but watch it.  Add coals to the top of the oven, but don’t worry about the bottom too much unless all the coals die out.