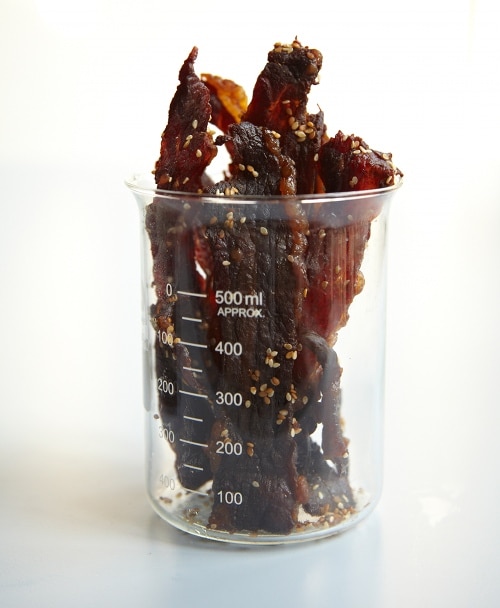 Editor’s Note: This is an excerpt from Tim Ferriss‘ new book, The Four Hour Chef.

An Introduction to Dehydrating Food

Dehydration is all about removing water from food. Doing this helps to preserve the food (bacteria need water) and concentrate ﬂavor. It’s a common misconception that you need heat to dehydrate food. But low humidity, not heat, is the driving force behind dehydration. Warming the air surrounding the food helps keep it dry, but if the air doesn’t move, the food will stay wet. So when dehydrating food in the kitchen, make certain that air can freely circulate around it.

Sidenote: You can achieve the same preservation of dehydration by leaving the water in food but making it unavailable to bacteria. Just add substances like sugar and salt, which bind to water molecules and lock them away. Lox (salt-cured salmon) and salted butter are safe to keep at room temperature for this reason—but unsalted butter is not!

The Best Jerky in the World

Sometimes a survival skill isn’t just about preparing for hard times. Six-time New York Times best-selling author Neil Strauss learned this while writing about apocalypse-proofing your life in his book Emergency. Yes, learning to preserve meat was useful. But learning to flavor meat was an art.

In search of the perfect marinade, he polled everyone: hard-core survivalists, friends’ grandfathers, chefs, and beyond. Then he split-tested the best and simplest recipes that didn’t require a smoker or a food dehydrator. He submerged near-identical meat slices into 2–5 containers of marinade at a time. Sometimes he tested a different brand or amount of teriyaki sauce, and other times he added a random ingredient like truffle oil or mustard. It became something of an obsession.

The following recipe is what won all the taste tests.

This recipe is intended for home cooking, not for the wilderness, but it can be adapted for the wild.

00
Put the meat in the freezer for an hour to make slicing easier. Slice meat with the grain as thin as possible (less than 0.6 cm or 1⁄4″). If you’re lazy or not great with the knife, call the butcher ahead of time and ask him to slice 2 kg (5 lb) of lean brisket at this thickness. The leaner the meat, the better and longer-lasting the jerky.

01
Add the 3 T garlic powder, 3 T onion powder, 3 T sesame seeds, and 3 T brown sugar. Throw in 1 t of cayenne pepper. Add more if you like it spicy, but a little goes a long way. Note: cayenne pepper is also great for putting on a cut to stop bleeding, and it doesn’t sting. 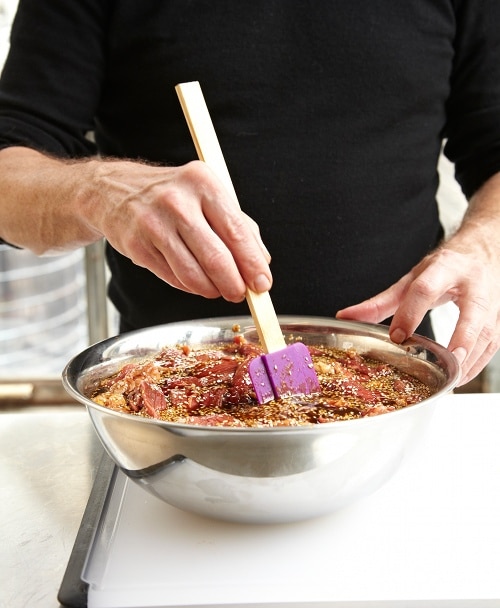 Make sure your meat is completely submerged in the marinade.

02
Stir well, then drop your meat into the marinade. Your meat should be fully submerged.

03
Optional: Sometimes I’ll take a smaller container and play with a slightly different marinade, adding in different oils, spices, and notes (even soda, wine, or beer) to the same base marinade. I’ll add in a little of the sliced meat for a batch of experimental jerky.

04
Close or cover the container(s), then leave in the refrigerator for at least 24 hours.

05
Once the meat is well marinated, it’s time to dry it: Cover the bottom of your oven with aluminum foil. Things will get mess 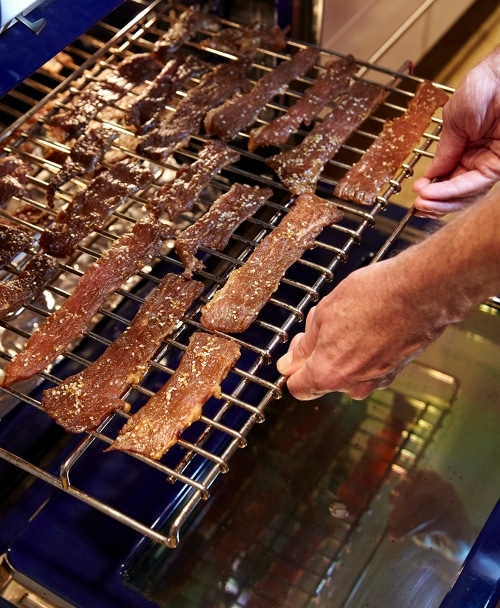 The higher the racks are placed in the oven, the better.

06
Place the meat on the racks of your oven, one next to the other (see pic above). The higher the racks are placed in the oven, the better. If you like, you can put the meat on aluminum foil or hardware cloth.

07
Set your oven temperature to 70°C (160°F), or 80°C (180°F) if you’re in a rush. Crack open the oven door by sticking a wooden or plastic serving spoon in the top of the door. Steve Rinella uses a crunched beer can. The goal is to dry the meat but avoid cooking it.

08
Let it dry for 3 hours, then turn over the jerky. After another 3 hours, it should be done. The total time, however, is dependent on the thickness of the meat and the temperature of the oven. The jerky is done when it’s dry enough that you can rip off a piece easily, but before it snaps when you bend it.

09
Leave meat out in the air to cool. It is now ready to eat. The longer you leave it out to cool, the drier it will get. After no longer than 24 hours, store it in sealed Ziploc bags. Without refrigeration, it will be good for 4–6 months.

Have any other jerky-making tips? Share them with us in the comments!

Available now, The Four Hour Chef by Tim Ferriss isn’t just a cookbook (though, you’ll find plenty of recipes in it like this one for beef jerky). It’s a guide on how to learn anything (like cooking) as quickly as possible using a simple system Ferriss has designed to master a wide range of skills.