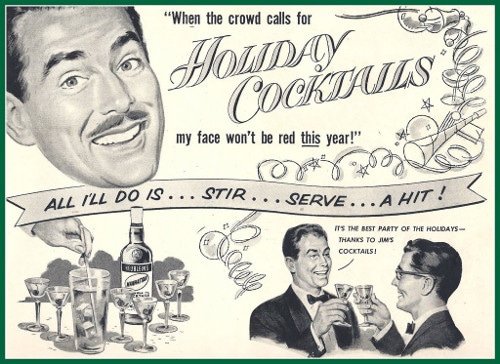 Whatever winter solstice-based holiday you celebrate, these drinks will get you into the holiday spirit, whether it’s to wind down after a long day of fighting the hordes of holiday shoppers, or to celebrate with friends and family. Holiday traditions and drinking oftentimes go hand in hand. Even the most teetotaling grandmother might reach for a snort of the old Glogg around the holidays. Many of these drinks are traditionally served warm, to warm the body and the spirit during the cold and dark days of the year. I hope you enjoy!

This cocktail dates back to colonial times. Rum was more popular than whiskey around the time of the Revolutionary War. When the British imposed a heavy tax on imported molasses (for the making of rum) bribery and smuggling ensued, and played a part in sparking the sentiment of “No taxation without representation.” Our forefather’s taste for rum may have lead to revolution!

You’ll need to make a batter of butter and spices:

With the butter at room temperature, smash all the ingredients together in a bowl with a fork until fully combined. Using plastic wrap or wax paper, roll and form into a log. Refrigerate for later use.

To make the drink, use 2 tablespoons of batter and toss in a mug. Pour about 6 oz of hot water or hot cider (I prefer cider) on top of the batter and stir until it is completely dissolved, then add dark aged rum, about 1.5 oz or to your tastes. Stir to incorporate all the flavors, add a little sprinkle of nutmeg on top, and you have hot buttered rum! Serve with a stick of cinnamon to garnish and to use as a stir stick.

There are a few options for making this drink. You can choose a light or spiced rum if you prefer a lighter taste. You can also use either cider or water as the main mixer– try both! There are also some recipes that call for a bit of light cream to float. 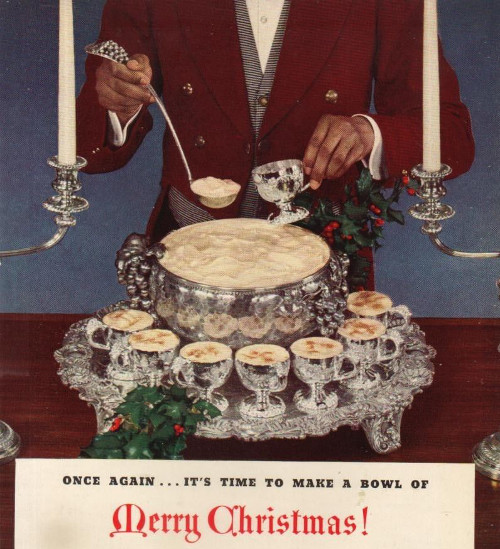 Eggnog dates all the way back to the 17th century. In Britain, it was a drink for rich landowners, as they had access to milk and eggs from their farms that city dwellers in London didn’t have and couldn’t afford. The American colonists, however, had plentiful access to farms, and therefore milk and eggs, so the drink became more popular here and eventually transformed into a holiday staple.

The following recipe can be used with any type of alcohol, though I don’t recommend clear liquors like vodka, gin, or light rum. A cup of dark or spiced rum, aged whiskey, or brandy (or combinations of them) all can make this drink shine.

Separate the eggs, set whites aside. Beat the yolks with a mixer with 1/2 cup of the sugar, then stir in the half & half, bourbon, brandy, and nutmeg. In a separate bowl, beat the egg whites with 1/4 cup of sugar, until it thickens and you get “stiff peaks.” Fold the whites into the yolk/booze mixture, then refrigerate. When ready to serve, spoon into a mug and sprinkle nutmeg as a garnish.

If you’re looking for a tasty variation on traditional eggnog, try the Tom and Jerry. It has nothing to do with the cartoon cat and mouse. Rather this classic drink was invented in 1821 by journalist Pierce Egan as a way to promote his book with one amazingly elongated title: Life in London: The Day and Night Scenes of Jerry Hawthorn, Esq. and His Elegant Friend Corinthian Tom, Accompanied by Bob Logic, The Oxonian, in their Rambles and Sprees through the Metropolis. Warm, whipped, and made with brandy and rum, the Tom and Jerry was a holiday staple and popular wintertime belly-warmer up through the 1950s. Because the batter that makes up its foundation is more difficult to produce in a pre-packaged, ready-to-serve form, it was supplanted by eggnog which could be easily sold at the local grocer (though you can sometimes still find Tom and Jerry batter for sale in the Upper Midwest). But if you’re looking for a unique and classic drink to offer your guests, it’s a recipe worth dusting off and serving up in its traditional vessel — a gold-rimmed mug emblazoned with the Tom and Jerry name.

Glogg is a mulled wine of Nordic origins. Many cultures have a mulled wine holiday tradition, and they’re all very similar, but the following recipe is a close representation of the Nordic style.

Stir the wine, spices, sugar, and orange peel together in a glass or plastic bowl (some metal bowls could react with the wine) and refrigerate overnight. Strain it into a pot and simmer until warm, stirring. To serve, add a few raisins and almonds into each small mug before ladling in the warm glogg. You can add one of the above liquors to kick it up a bit! 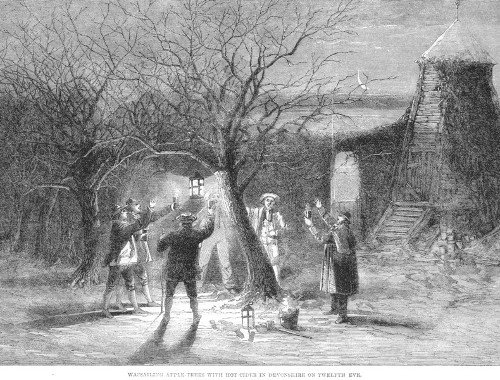 Wassailing is an English winter tradition that reaches back hundreds of years, when peasants would sing in front of the houses of feudal lords, wishing good tidings for the coming new year in exchange for food and drink. The singing would separate the request for sustenance from begging, which was frowned upon. This tradition eventually turned into what we now know as Christmas caroling.

In England’s apple growing regions, wassailing was done at the orchard to ward off evil spirits and bless the trees for a good harvest. Crowds of wassailers would utter incantations, and then wail, bang pots, shoot off guns, and create enough racket to chase away the evil spirits. The revelers would consume plenty of wassail — a hot, mulled cider — as they drank to the health of the trees. This traditional festival continues on today in places like Somerset and Devon.

Warning: simmering this drink on the stove will fill your home with wonderful smells and definitely get you in the holiday spirit!

Place all spices into a large spice bag, or bundle in cheese cloth then tie off with kitchen twine. In a large pot, bring apple cider, cranberry juice, and brown sugar to a boil, making sure you stir up all the brown sugar to get it dissolved. Also throw your spice pack in there. Once boiled, let simmer for at least 30 minutes. When ready to serve, pour into a mug containing 1 oz of your favorite dark liquor, preferably bourbon. Serve with a dusting of nutmeg and a cinnamon swizzle stick.

This cocktail uses the white chocolate and peppermint flavors and keeps the potato chips where they belong — in the bag. This one’s not as traditional as the rest, and probably too foo-fooey for a lot of guys, but it’s good to have a drink or two up your sleeve that can impress your lady party guests or delight a date.

Wet the rim of the cocktail glass in simple syrup (1 part sugar and 1 part water — boiled until the sugar is dissolved), then rim the glass with finely crushed candy canes. Set aside. In a cocktail shaker, pour all liquids over ice, and shake until frothy. Strain into previously rimmed cocktail glass. Garnish with a sprinkle of the crushed candy canes or a small whole candy cane. Enjoy!

Be sure to listen to our podcast on making your holidays even more memorable: