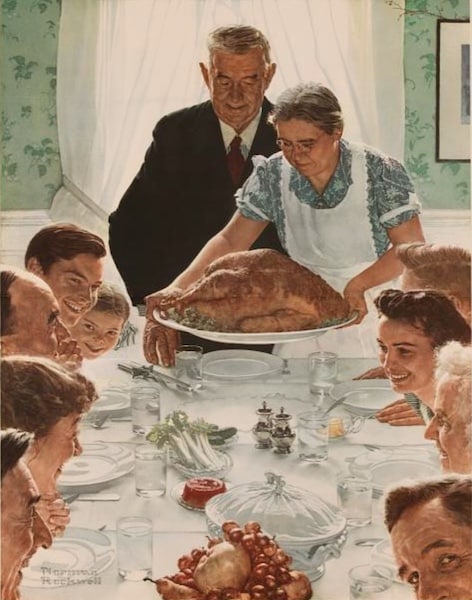 One of the things that stands out to me about that depiction of Thanksgiving in some small-town home in mid-20th century America is the kindly grandpa wearing a suit and tie.

I reckon that his usual workaday clothing was a pair of bib overalls and a work shirt.

I also imagine that that’s what he wore to most meals around that table throughout the rest of the year.

But to make a distinction between Thanksgiving dinner and the blur of dinners he ate every other evening, grandpa put on his Sunday best.

Over the decades since Rockwell painted this piece, Americans have gotten more casual and informal. The tradition of dressing up for family gatherings like Thanksgiving or Christmas dinner has been waning. A lot of folks just roll out of bed in their sweatpants and sidle up to the table in the same garb.

Thanksgiving dinner ends up feeling like any other dinner during the year, except you might have turkey, stuffing, and a few less-often-seen guests.

Maybe lolling about in your athleisure all day on Thanksgiving is a revered ritual in your family. If eating Thanksgiving dinner in Goblin Mode is an intentional family tradition, then by all means, keep on keeping on.

But if it’s something you just kind of defaulted into, might I suggest you give getting dressed up for Thanksgiving a try?

As we pointed out in our article, “Dressing for Others,” clothing isn’t just a way for us to display our personality and taste. The way we dress can influence how others perceive and experience social gatherings:

How you dress contributes to the ambiance, to the weight of an event — to how significant the occasion feels. Just as a dinner with paper plates and cups feels different than one with fine china and crystal, an event where everyone is dressed in something other than their everyday duds feels different than one where everyone’s in their daily uniform of t-shirts and jeans. Not only does your manner of dress add to the overall “ethos” of an occasion, it enhances the aesthetics of its “backdrop.” As Russell Smith observes in Men’s Style, ‘Physically attractive people are pleasant to be around, just as beautiful buildings are pleasant to live in, and warm rooms are preferable to cold.’

If you want to get over the Horror of the Same Old Thing this Thanksgiving, take a cue from the grandpa in that Norman Rockwell painting: swap out your everyday getup for something a little more formal.

It doesn’t have to be a full-on suit (though we won’t discourage you from sporting such). Just wear clothing that’s a bit dressier than your typical day-to-day wear.

For me, that means putting on a button-down Oxford shirt and wearing a nice cardigan with a pair of jeans and dress boots. It’s not a suit and tie, but it’s a definite step up from the joggers and hoodie I’m usually wearing.

Encourage other people coming to your Thanksgiving dinner to dress up too. Their individual efforts will contribute to the ambiance of the feast. Instead of just being another dinner, Thanksgiving will feel like a special event, something set apart from the rest of the year — something to feel extra grateful for. 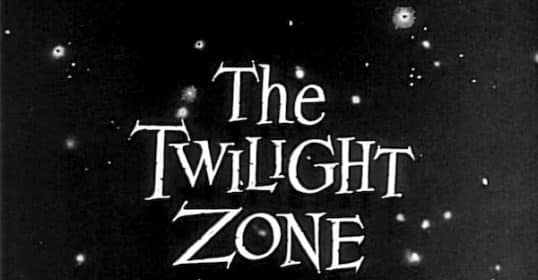