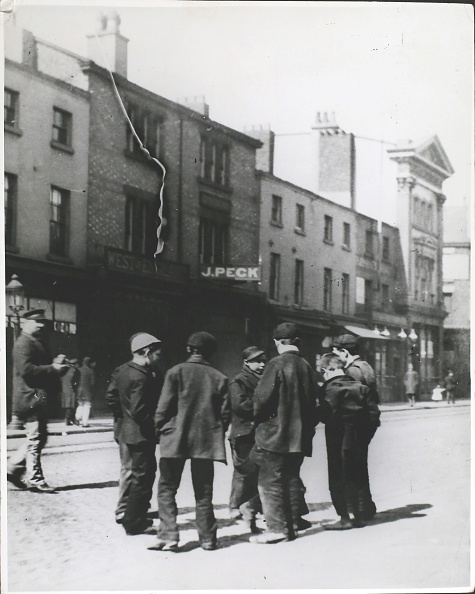 If you can make one heap of all your winnings
And risk it on one turn of pitch-and-toss,
And lose, and start again at your beginnings
And never breathe a word about your loss;

If, like us, you’re a fan of Rudyard Kipling’s manliest of poems — “If—” — you’ve probably read those lines many times before.

That’s the question that crossed my mind the other day while reading the “If” poster hanging on my son’s wall for the dozenth time. And I decided I’d finally figure out the answer, and learn what exactly pitch-and-toss was, and how to play it. If you’d like to learn how to play it too, read on.

A Brief History of Pitch-and-Toss

Pitch-and-toss goes by various names, including “pitching pennies,” “pigeon toss,” “chucks,” “tinks,” and “jingles.” Versions of the coin-tossing game have existed across cultures going back thousands of years. The ancient Greeks played it with bronze coins. It rose to popularity in the West in 19th century England, though as the winner of a round of pitch-and-toss gets to keep the coins that are played, it’s a form of gambling, and as such was illegal; those caught playing could be punished with a fine, days to weeks in prison, and even hard labor. But that didn’t stop it from being played by grown men in gentlemen’s clubs, nor by working-class street kids, amongst whom the game was especially popular.

In English cities, boys would gather in back alleys and along canals to play covert games of pitch-and-toss. Sometimes these gatherings were small and informal; in other cases, large, organized competitions took place during which hundreds of pounds changed hands. Lookouts would scan for the police; if a bobby was spotted, the players would scatter in all directions.

Pitch-and-toss migrated to America and remained a popular pastime on both sides of the pond into the 1950s. Then, as with all street games, from kick the can to stickball, it started to disappear as boys increasingly sought their entertainment indoors, in front of the television.

How to Play Pitch-and-Toss

There are different variations of pitch-and-toss.

In its simplest form, a player just tosses a handful of coins in the air, and he and his chums place bets on the proportion that will land heads up versus tails up. It’s a game of pure chance.

Another common form of the game played back in the day involves a bit of skill. Players, who supply their own coins, line up at an agreed upon distance (often around six to seven yards) from a wall or a marker like a rock. The players then take turns tossing coins of equal value towards the wall/marker. The player who gets his coin closest to the target wins. Winner collects all the coins that were tossed.

There are a few variations on this version.

If the player who makes the first toss is happy with his toss, he can let it lie. In that case, all the players who follow him must let their first toss lie where it lands as well. If he doesn’t think his first toss is close enough to the wall to beat the subsequent players, he can pick it back up, and try tossing it again, after all the other players have made their toss. The next player can also either let his first toss lie or pick it up to take his chance on a second round toss. However, once a player decides to let his coin lie, all subsequent players must do likewise, e.g., if the first and second players pick up their coins, but the third player lets his coin lie, then the fourth and fifth players must let their first toss lie, and when the first and second players have their second chance at tossing, they must let those tosses lie.

You can also modify the game by making it so that the coin has to hit the wall before it hits the ground. Closest coin to the wall after hitting the wall wins.

Rather than doing the winner-takes-all method, another way to distribute coins at the end of pitch-and-toss is called “tips.” Instead of the winner of the round getting all the coins tossed in that round, the winner gathers all the coins in his hands, tosses them up in the air, and calls “heads” or “tails.” He then gets to keep all the coins that land on the side he called.

The remaining coins are gathered by the player whose coin landed second closest to the wall. He shakes them up, tosses them in the air, and calls heads or tails. He collects the coins that land on the called side. If there are any remaining coins, the third-place player goes through the same process. If the player who ends up with the last coin calls heads and it lands tails (or vice versa), he passes it back to the first-place player who gets another shot at tossing and calling it. And so on.

The tips variation just distributes the coins a bit more equitably than the standard winner-takes-all version and allows for longer gameplay.

Make One Heap of All Your Winnings . . .

It seems that the lines in “If—” about making one heap of all your winnings and risking it on one turn of pitch-and-toss refers to winning a round of the game and then taking those winnings and going all-in on betting that you’ll win another round. It’s of course a metaphor for taking any kind of risk in life . . . and then being able to move on, with resilience, if it doesn’t pan out. But hey, now you know how to literally play a game of pitch-and-toss, too. And the same rules apply: there’s no whining if you lose!