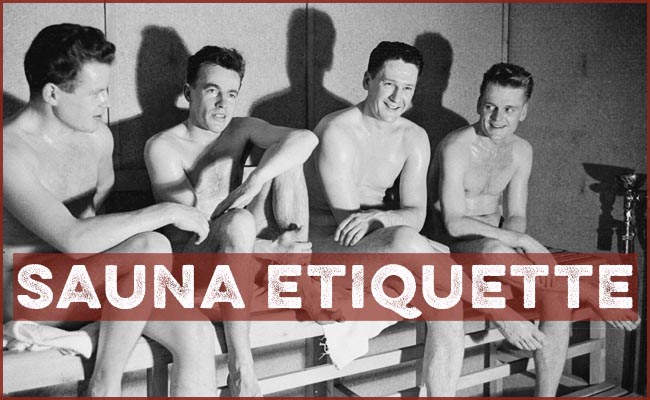 A few years ago, I became the happy owner of a barrel sauna. Sauna-ing offers a ton of physical and mental benefits, and the purchase has been one of the best investments I’ve ever made.

Before I had my own sauna, I’d use public saunas at gyms to get my fix of intense heat.

During those years of public sauna use, I saw some infuriating instances of poor sauna etiquette. In fact, the driving force that pushed me to buy my own sauna was becoming fed up with the thoughtless chuds I had to roast myself alongside.

If you’re out there frequenting public saunas, below I highlight some rules of etiquette to make the experience more pleasant for everyone.

Basically, these guidelines are directed by this categorical imperative: don’t be an annoying chooch in the sauna.

1. Enter and leave quickly and quietly. Heat flows to cold. It’s one of those fundamental laws of thermodynamics. That’s why it’s important to minimize how long you leave the door to the sauna open; you don’t want to let the hot air escape!

When you enter and exit a sauna, do so quickly. Don’t be the guy who opens the door all the way, steps halfway into the sauna, and then proceeds to have a conversation with his bud who’s still in the locker room while the sauna door hangs open.

Also, make sure you shut the sauna door all the way when you enter and exit. Sometimes you need to give a sauna door an extra tug to completely close it.

While you’re at it, be quiet as you come and go. Saunas are about relaxing. Don’t kill the vibe by making a ruckus when you enter and exit.

2. Respect the dress code (or lack-of-dress code). In Finland, people sauna in the buff. It’s part of the culture. Here in the States, public nudity, even in saunas, isn’t normally a thing. Most public saunas in gyms will ask that you wear gym shorts or swim trunks while sauna-ing or at least wrap a towel around your waist. Respect the prevailing mores of your particular public sauna.

3. Use a towel. Whether you sauna in shorts or in the buff, bring a towel with you. Use the towel to sit or lie down on. It’s hygienic and will also put a comfortable buffer between your skin and the hot wood. You’ll also want a towel for sponging off your dripping sweat.

So before you pour water on the sauna rocks, ask everyone in the sauna if that’s okay. You need unanimous consent for this one.

On a related note, some people like to drizzle essential oils on the sauna rocks to give themselves some aromatherapy. Ask before you do this too. This one guy at my old gym had a wife who sold essential oils. He was the sauna’s serial essential oil drizzler. Never asked permission, and the stuff was potent and often didn’t smell great. This dude would also inform everyone in the sauna as to all the things the fragrances were healing. No one liked that guy. Don’t be that guy.

The essential oils chooch did this. Never asked anybody if it was okay. I don’t mind a sweltering sauna, but a lot of people don’t want to sit in one that’s 200 degrees Fahrenheit.

Ask before you adjust the temperature.

6. Don’t listen to music on your smartphone. This drove me absolutely bonkers. I’d be in the sauna relaxing after a workout, and some dude-bro comes in blaring music from his smartphone’s speakers. He’d then just sit there, music still blasting, and scroll through Instagram, oblivious to everyone else around him.

Bro, no one wants to listen to your crappy Drake playlist while they’re in the sauna. As they say in Mexico, “¡Sácate con esta basura, chunte!” “Get that trash out of here, dummy!”

I had to ask several different dude-bros to turn off their music or to at least put earbuds in while they were in the sauna. They always looked at me like I was growing a horn out of my head. It’s like it never crossed their mind that someone else might not want to listen to their music.

Don’t be a chunte and listen to music in the sauna.

7. In fact, just leave your smartphone out of the sauna. The sauna is about relaxing and getting away from the world, so why bring the distraction of a smartphone into such a sanctuary? I’ve had to deal with sauna scalawags who carry on 20-minute phone conversations while I’m sitting next to them.

Leave the smartphone in your locker. Besides, the heat of the sauna isn’t good for your phone.

I walked into the sauna one time, and it was pretty full. There would have been room for me if this one dude just sat up from lying down. Guy just looked at me while I stood there eyeing the potential seat. When I asked him if he could sit up so I could take a seat, he acted all put out. What a chooch!

9. Don’t exercise in the sauna. Saunas are for relaxing. It’s not a hot yoga room. Don’t go in there to stretch and do push-ups before your workout. No one wants to see that.

10. No grooming. True story: I walked into the gym sauna one time, and a dude was cutting his toenails. Even left the clippings behind when he was done. Disgusting.

Follow these guidelines, and it’ll make for a pleasant sauna session for yourself and others.

Happy sauna-ing! Don’t be a chooch!