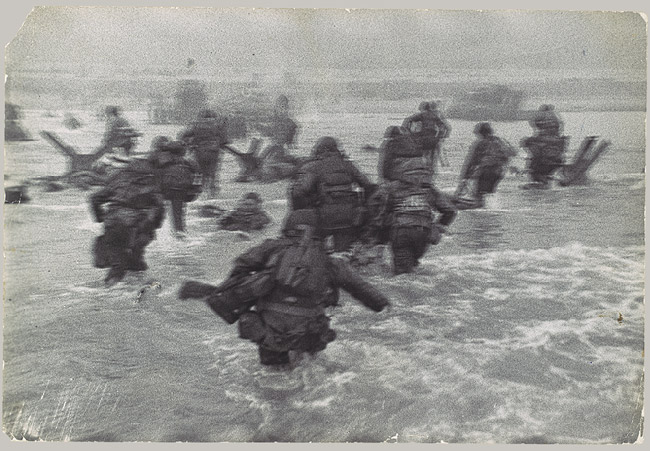 This June 6, 2014, marks the 70th anniversary of the Allied invasion of Normandy during WWII. June 6, 1944, was a massive and bloody undertaking that helped turn the tide of the war.

The day is forever known simply as “D-Day,” although the term D-Day is a generic term that refers to the start of any military operation.

The objective of the June 6 initiative was to establish beachheads at five beaches along a 50-mile stretch of heavily-fortified coastline in Nazi-occupied France. The beaches were codenamed Utah, Omaha, Gold, Juno, and Sword. Once the beachheads were established, more troops and supplies could be brought ashore to begin the march across Europe to defeat Hitler.

Some 130,000 troops from three main Allied countries, the United States, Great Britain, and Canada, along with contingents of soldiers from several other Allied countries, crossed the English Channel and stormed the beaches of Nazi-occupied France under a hail of gunfire and artillery blasts. Some 18,000 paratroopers had already dropped hours earlier to fight behind enemy lines.

France had been under control of the Nazis for about four years. By June 6, 1944, Hitler’s armies controlled most of mainland Europe.

The D-Day land invasion began at 6:30 a.m. Historians note that disorganization, confusion, and incomplete implementation of plans characterized many initial phases of the landings, although troops were often able to adapt on the fly. The opposition was lighter at Gold, Juno, Utah, and Sword beaches, and was hardest at Omaha Beach. Nazi troops were unexpectedly strong there, the terrain was difficult to navigate, and Allied troops were mowed down as they came ashore. 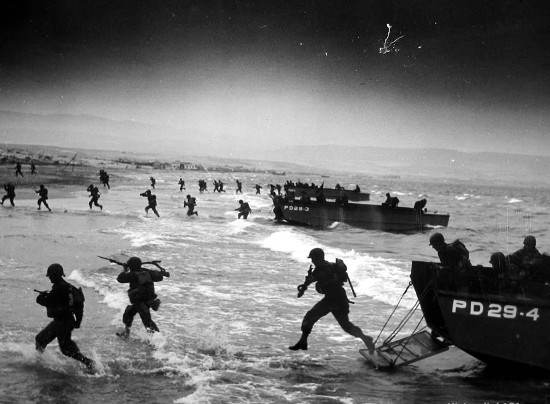 Overall, the Normandy invasion proved a decisive Allied victory, although the costs to both sides were high. By midnight of the first day, all five beaches associated in the landings were secure.

The war inland continued from there. Paris was liberated on August 25, 1944, and Allied troops reached the border of Germany on September 16, 1944.

D-Day has been described and depicted in numerous books and movies. The top three movies about D-day are arguably The Longest Day (1962), Saving Private Ryan (1998), and the HBO miniseries Band of Brothers (2001). 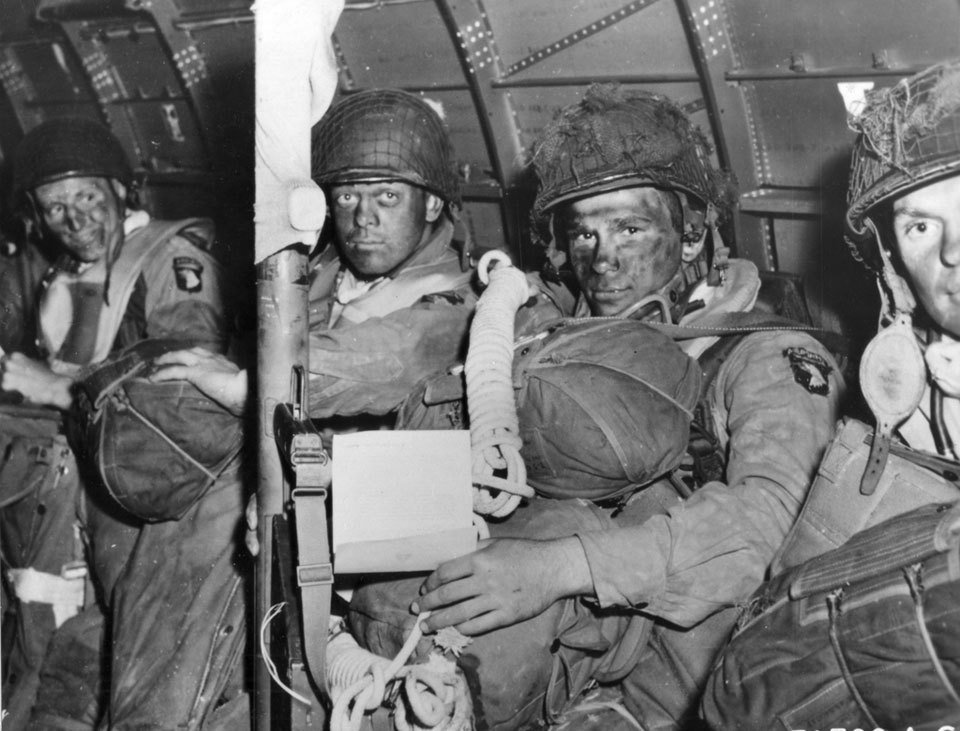 In years past I’ve been privileged to speak with surviving members of Easy Company, 506th PIR, 101st Airborne, the elite paratroopers known as the Band of Brothers.

What follows are a few selected stories from the men who were there. Keep in mind that the men below are all paratroopers. 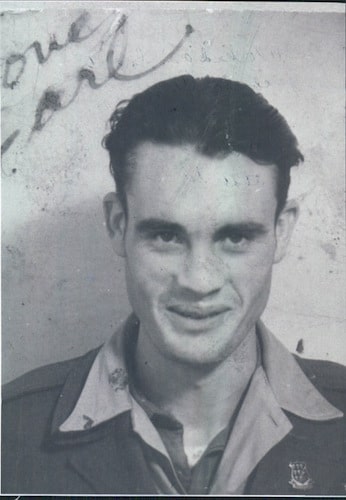 When Earl McClung flew over the English Channel on the way to Normandy, he looked out the open door of the C-47 airplane and saw line after line of ships below him. He was amazed at the sheer number of ships ready to hit the coast.

When the plane he was in reached the coast, enemy gunners below opened fire. Flak was heavy.

McClung said, “You didn’t pay attention to ships anymore. You just wanted to get out of the plane alive.” 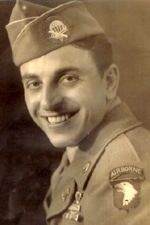 Frank Perconte landed near St. Marie du Mont. He didn’t remember much about the town except a river ran near it.

Perconte said, “You’ve got to think, the plane’s going 150 miles per hour, and there are twenty guys in the plane. So from the first guy out the plane to the last guy who jumped, you were at least five miles apart when you landed. But we got together and kept going.” 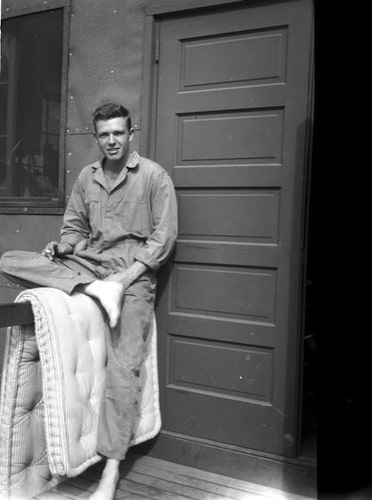 Lowrey started his interview by saying simply, “I’ll put it like this: D-Day was a bad day for a lot of young men.”

After Lowrey parachuted out of his plane, he hit a tree on the way down and got tangled up in the branches. While he hung from the tree, two enemy machine gunners in each corner of a field shot at him. He could see tracer bullets coming straight toward him.

Lowrey described how he cut his ammo off his leg and let it drop, then let his machine gun drop next, then got himself out of his harness, then he dropped to the ground.

“When it comes to D-Day and the rest of the war, that’s all I talk about,” Lowrey said. “The only person I ever talked to about what happened was my wife. She was the only person who needed to know.” 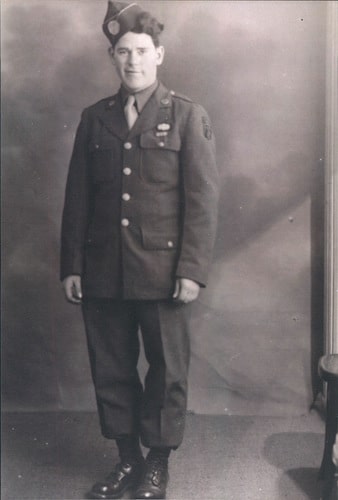 When Ed Joint landed, he was surprised to find Joe Lesniewski, his friend from Erie, PA, right next to him on the ground. No one else was around, and all was quiet where they’d landed. They took off their chutes and began hiking to find the rest of their unit.

Early in the morning of the first day of fighting in Normandy, Ed encountered his first taste of battle artillery.

He said, “They were lobbing those huge shells over five, six, seven miles into France. Me and three others were walking across a field, and boy, something hit me. It knocked me out. The guys thought I was dead. One guy says, ‘He’s dead, let’s get the hell out of here.’ Another guy says, ‘No, I’m not leaving without him.’ So they waited a little bit and I came to. It was just a concussion. So we kept going.” 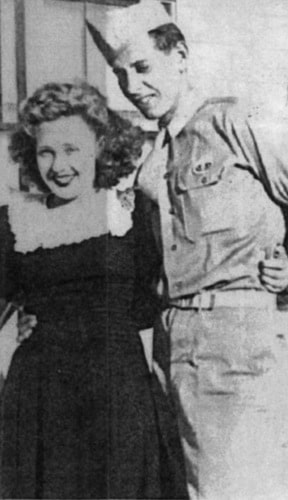 I traveled to Oregon and spent a day with Bill Wingett at his house where he talked extensively about his experiences on D-Day and throughout the war. Bill had lost his rifle on the jump into Normandy. The story below is recorded in his words:

I haven’t revealed my first action to anybody, and I don’t know if I really care to. I don’t think of it as hidden. It’s not very easy to kill a man. After you’ve done it, and after you’ve been shot at a few times, it becomes pretty easy.

The first time I killed a man was out of desperation. The column that I fell in with was moving up this causeway, and somebody said, “Three men: out there.” I went with a couple of other guys up this hill, more like a little rise. We saw some enemy soldiers and ducked down. Amazingly, these three Germans came within fifteen feet of us and started to set up a machine gun.

I decided that I had to do something. The other two guys who were with me had rifles. I was hoping they’d shoot. They didn’t.

So I killed the first [enemy soldier] with the knife I had. I went up behind him and ran it right into his kidneys. He had a rifle in his hands. As I hit him, he went down shooting, wounding one of his companions and killing the other.

I never learned the names of the guys I was with. I don’t know if I ever saw them again. Then we went down the hill. 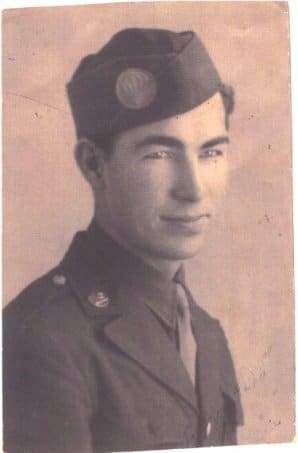 Ed Pepping was a medic. He remembers on the way out of the plane seeing burn holes in his parachute from the bullets going through it.

He landed in the middle of a field, but due to his angle of descent, he didn’t have enough time to pull up on his risers and alleviate the shock of landing. The back of his helmet hit the back of his head. Pepping didn’t know it at the time, but he had cracked three vertebrae and received a concussion. He blacked out, then came to, then blacked out again, then came to. These blackouts continued all the time he was in Normandy.

When Pepping landed he had nothing except a knife. As a medic he never carried a rifle anyway, but the speed of the jump and the opening shock had ripped all his medical equipment off of him. That proved very frustrating for Pepping as now he had nothing to work with. “You can imagine,” he said, “a lot of the wounds seen were catastrophic.”

As a medic, Pepping’s job was to do whatever he could do. On the first day he was on his way to join the rest of his unit when he was called into a building being used as aid station. The first wounded soldier he came to had a large sucking chest wound, “a wound they had only told us about but never seen firsthand,” Pepping said. “The only thing I could do was close the wound up as best I could. I couldn’t stay there to see that he was evacuated. I don’t know if the man lived or not. That was the way it was.” 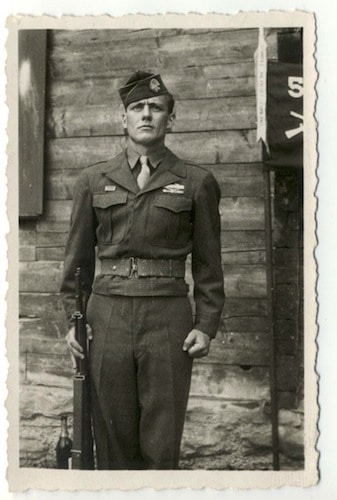 Below was all Rod Bain would say of the experience. I figured that one line of his said enough.

Read his blog, Men Who Lead Well, at www.marcusbrotherton.com.

All photos of veterans used with the permission of their families.