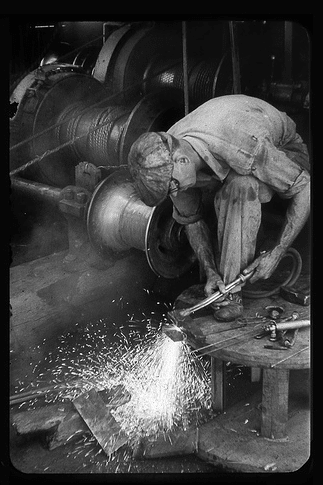 Awhile back, we put the word “hardihood” in a post and a couple of people asked if that was even a word. Well, not only is it a word-it’s a word that’s incredibly fun to say and is a real quality that every man should aspire to.

There are lots of quizzes these days designed to help you find the right field of work to match your proclivities and talents. The book How to Choose the Right Vocation, published in 1917, dispensed with the modern questions about creativity and being a “people-person” and asked men to rate themselves on things like their hardihood. The book argued that while hardihood was an absolute necessity in some vocations, it was a quality all men should seek to cultivate. How’s your hardihood? Ask yourself these questions and take some time to think it over.

Hardihood is so often made synonymous in common usage with rashness, presumption and untoward boldness that its prime meaning is obscured in the minds of many people. This first meaning is—to speak by the book—”boldness and confidence in action, especially in encountering difficulty, danger or contempt; stout and persistent courage.”

Hardihood gives physical endurance; it gives to a degree immunity from exhaustion as it enables one to ignore the first onset of fatigue attendant upon vigorous physical activity or upon stressful mental application and easily to get one’s “second wind,” which makes prolonged effort comparatively easy.

Hardihood generates constitutional boldness in attempting difficult tasks or those where the outcome is doubtful; it drives one into actions that require courage and fortitude to attempt; it leads one to overcome opposition to one’s efforts and to exercise intrepidity without apparent fear regarding the consequences, to climb over obstacles that would daunt conservative judgment or ordinary daring, to set one’s teeth and make the Herculean effort that brings success from apparent failure. What could advantage one more vocationally than such “stout and persistent courage?”

Hardihood is daring rather than conservative in its nature. It is frequently a strong characteristic in men who have vision, or foresight, and also excellent judgment and strong, practical abilities…

Hardihood is a kind of mental toughness. It gives one the courage of his convictions and makes him capable of defense; it nullifies sensitiveness and makes one capable of withstanding rebuffs; yes, even more, it makes one to a great extent indifferent to criticism and opposition. This strictly mental and emotional—or, rather, non-emotional— effect of this characteristic on oneself regarding the attitude of other people is of immense vocational advantage, particularly in business and in the professions. Sensitiveness to the opinions of others, lack of Hardihood sufficient to hold one’s own in one’s every-day relations and dealings is the cause of many a man’s failure who in other directions is capable.

People who are quite deficient in this characteristic are usually sensitive to the opinions of others concerning themselves and their acts. Such sensitiveness is a dangerous vocational deterrent. Disliking harshness, these people are as a general thing mild, conciliatory and appeasing in their expression. They let themselves be imposed upon even tho they half recognize the imposition at the time and wholly recognize it afterward; when they do occasionally get aroused and resent imposition their resentment is apt to be exprest in a passionate, uncontrolled and ineffective way…

As a man who is not “fit” can harden his muscles and his resisting power by proper exercise, so a man deficient in Hardihood can tone up this characteristic by persistent dynamic expression.

Hardihood unassociated with judgment is foolhardiness—the weak extreme of an excellent personal characteristic.