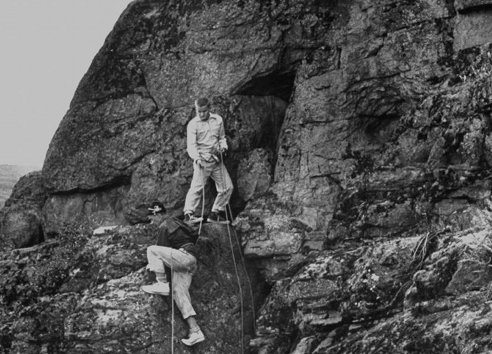 We all face difficulties in our lives. Some big, some small. When I look at the lives of great men who overcame great obstacles, one common thread between them is the attitude they took towards the challenge. They didn’t mope around and let whatever happen happen. The ones who conquered their difficulties took action and persevered. Sometimes they failed, but at least they “failed while daring greatly.”

Below is an excerpt from a book published in 1866 called Readings for Young Men, Merchants, and Men of Business. It’s entitled “Difficulties.” I thought it was motivating and maybe you’ll find it helpful, too.

It is weak to be scared at difficulties, seeing that they generally diminish as they are approached, and oftentimes even entirely vanish. No man can tell what he can do until he tries. It is impossible to calculate the extent of human powers; it can only be ascertained by experiment. What has been accomplished by parties and by solitary individuals in the tundra and the frozen regions, under circumstances the most difficult and appalling, should teach us that, when we ought to attempt, we should not despair.

The reason why men oftener succeed in overcoming uncommon difficulties than ordinary ones, is, that in the first case they call into action the whole of their resources, and that in the last they act upon calculation, and generally under-calculate. Where there is no retreat, and the whole energy is forward, the chances are in favor of success, but a backward look is full of danger.

Confidence of success, is almost success; and obstacles often fall of themselves before a determination to overcome them. There is something in resolution which has an influence beyond itself, and it marches on like a mighty lord amongst its slaves; all is prostration where it appears. When bent on good, it is almost the noblest attribute of man; when on evil, the most dangerous. It is by habitual resolution that men succeed to any great extent; impulses are not sufficient. What is done at one moment is undone the next; and a step forward is nothing gained unless it is followed up.

“What is difficulty?” says a popular author. “Only a word indicating the degree of strength requisite for accomplishing particular objects; a mere notice of the necessity for exertion; a bugbear to children and fools; only a mere stimulus to a man!”