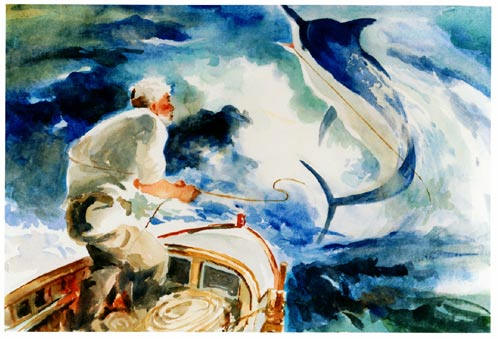 “Success” is all too often assumed to be the indicator of the value of a man. But success, in and of itself, merely speaks to a particular status and may have nothing to do with the journey that the man took to get there, or whether or not he retained his integrity along the way. Among the many aspects of the story, it is the idea of redefining success and victory that makes The Old Man and the Sea, Ernest Hemingway’s classic novella, so profound.

It is a seemingly simple story: Santiago is an old, experienced fisherman who hasn’t brought in a catch for months. On the 85th day of this dry spell, he heads far out into the Gulf of Mexico where he hooks a giant marlin. Unable to pull the fish into his skiff, he holds onto the line for three days before killing it with a harpoon. After lashing the fish to his boat, Santiago heads home with his hard-won prize. But along the way, sharks reduce the fish to bones, and the old man returns to port as he left–empty-handed.

Yes, a simple story on the surface, but also a tale with a much deeper message and a relevance that transcends time and place. It speaks to the universal truths of a man’s existence within this world, where pride, respect, tenacity, and dreams fuel a man in his quest to thrive in the face of struggle. It is a story about the indomitable spirit of man; Santiago stands as a symbol of an attitude toward life, and his fight with the mighty marlin offers numerous lessons to all men.

Lessons in Manliness from The Old Man and the Sea

“A man is not made for defeat.”

Santiago has nothing but a broken-down shed and a rickety skiff with a sail that is “patched with flour sacks” and looks “like the flag of permanent defeat.” The skin of his gaunt body illustrates his hardships and is marked with deeply-set wrinkles, scars, and blotches from the punishing sun. And because of his terrible misfortune, he is a pariah in his small fishing village.

But while nearly “everything about Santiago is old,” his eyes remain “the same color as the sea and are cheerful and undefeated.” Instead of throwing in the towel after 84 days of terrible luck, he sails farther out into the Gulf than he has gone before.

A man continues to do whatever he must do to the best of his ability, no matter what tribulations befall him. While challenges and setbacks can strip a man of all outward signs of success, still his spirit can remain undefeated. For it can will a man to never give up and to keep on trying.

Or as Hemingway puts it: “A man can be destroyed but not defeated.”

A man does not depend on luck.

Luck plays a major role in the story and in our everyday lives, and to a superstitious lot like fishermen, poor luck can seem paralyzing. In Santiago’s little Cuban fishing village he is labeled “salao, which is the worst form of unlucky,” after having gone eighty-four days without taking a single fish.

This makes him a outsider among his peers, and it costs him his trusty partner, the boy Manolin, whose parents forbid him from fishing with the old man. While Santiago deals with the suffering of being hungry and poor, other boats from his village continue pulling in good fish every day.

Anyone can have luck of course, but not everyone one can have determination, skill, and perseverance. Santiago knows this and therefore believes in his ability rather than chance. “To hell with luck,” he thinks. “I’ll bring the luck with me.”

He does this by not taking any shortcuts in his work. He keeps his fishing lines straighter than anyone, and he makes sure that, “at each level…there [will] be a bait waiting exactly where he wishes it to be for any fish that swim there.” Santiago keeps his lines with precision, and he is ready for whatever comes.

We cannot attain success simply by waiting for good things to happen. It is when we strive forward towards a goal that we open ourselves up to opportunity. As Santiago muses, “It is better to be lucky. But I would rather be exact. Then when the luck comes you are ready.”

A man bears pain and hardship without complaint.


He was shivering with the morning cold. But he knew he would shiver himself warm and that soon he would be rowing.

Whether it’s something as trivial as being cold or as significant as skirting along the borders of death, a man simply does what must be done, without self-pity and without complaint. Santiago does not whine about hunger pains or thirst, nor does he mope about the fishing line that cuts into his hands.

Out at sea, far beyond the other boats, Santiago is presented with the greatest challenge of his life. It comes in the form of an eighteen-foot marlin and makes for a long, long battle that spans days. Near the edge of his exhaustion, Santiago’s hand is cut deeply and cramps up “as tight as the gripped claws of an eagle.” He washes the cut in the salt water and lets it dry and warm in the sun. But the hand refuses him and he is forced to work with his right hand alone, against the powerful fish that is two feet longer than his own skiff. Drained, Santiago “settles against the wood” and simply “takes his suffering as it comes. He is comfortable but suffering, although he does not admit the suffering at all.”

A man does not boast.

The quality of a man is best seen through his actions, and developing humility is a key ingredient in letting our actions do the talking for us. Santiago is given plenty opportunity to boast during a conversation with his young friend, Manolin, but he does not.

Manolin asks, “Who is the greatest manager, really, Luque or Mike Gonzalez?”

“I think they are equal.”

“And the best fisherman is you.”

“No. I know others better.”

“Que va,” the boy says, “There are many good fishermen and some great ones, but there is only you.”

“Thank you. You make me happy. I hope no fish will come along so great that he will prove us wrong.”

And it’s only because of Santiago’s determination that none do. Boasting only briefly satisfies insecurity. It leaves no lasting impression on the crowd who hears it.

A man finds inspiration from others.

But I must have confidence and I must be worthy of the great DiMaggio who does all things perfectly even with the pain of the bone spur in his heel.

For Santiago, it is “the great Joe DiMaggio” who inspires and motivates him. He possesses traits that Santiago admires, reminding him that to be successful you have to put all of yourself into a task and bear up under difficulty. Looking up to others–having heroes–provides us with examples to follow, the knowledge that others have overcome obstacles as well, and the assurance of the great possibilities of a man’s life.

A man goes down swinging–no matter his age.


Old age is a common excuse, and for certain things it is legitimate, but all too often it is used either where it has no place or before any effort has been made to prove the assumption wrong. When the sharks begin attacking Santiago’s marlin, at first he fears that he cannot defend himself because of his age, but before long, he gathers his tools to be used as weapons and does what he must. When he breaks the blade off his knife in the body of one shark, the fear sinks in again. “Now they have beaten me,” he thinks. “I am too old to club sharks to death. But I will try as long as I have the oars and the short club and the tiller.”

And many more sharks do come. He has to club and strike them with all of his strength. During the fight, the sun goes down and Santiago wonders, “What will you do now if they come in the night? What can you do?” He digs deep. “‘Fight them,” he says, “I’ll fight them until I die.”

Though the sharks do eventually tear Santiago’s marlin apart, they do not defeat him as a man, and he never gives up. Paddling in, he tastes blood in his mouth, so he spits into the ocean and says, “Eat that galanos. And make a dream you’ve killed a man.”

Every man has sharks that circle him; they gather when they smell the blood of real achievement. But you’re never too old to put up a fight.

A man’s legacy comes from maintaining his integrity.


Santiago drifts away from the pages of this story with exactly the same thing he had when it began: almost nothing. His catch does not bring him money nor “success,” but it does provide him with a legacy that will endure far beyond any monetary gain ever could have. For he retains his own integrity in the face of great challenge; he exhausts himself in a good fight. A man doesn’t quit.