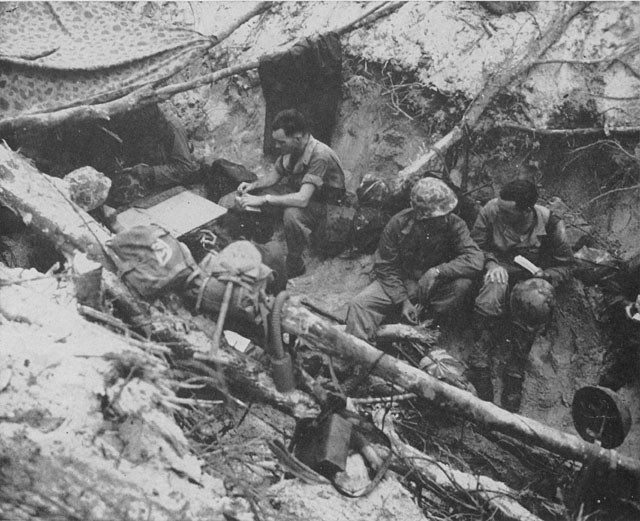 Editor’s Note: It’s hard to describe manliness in isolation — that is, apart from the flesh and blood men who embody it. It’s something that you instinctively recognize and feel when you encounter it in another. As such, one of the best ways I’ve come to understand manliness is through the descriptions men have given of other men they admired. I sometimes come across these in the books I read, and find them very stirring and evocative. More than any direct analysis of manhood, these indirect snapshots remind me of the kind of man I wish to be. So I thought I’d share my favorite “descriptions of manliness” from time to time in hopes they’ll have a similar effect on you.

First up is the description Private Eugene Sledge offers in With the Old Breed of his platoon leader, 1st Lieutenant Edward “Hillbilly” Jones. The green Marine had been badly shaken by the horrors of the battle of Peleliu (1944), and Jones’ confidence and presence were able to put him at ease.

Hillbilly was second only to Ack-Ack in popularity among the enlisted men in Company K. He was a clean-cut, handsome, light-complexioned man—not large, but well built. Hillbilly told me he had been an enlisted man for several prewar years, had gone to the Pacific with the company, and had been commissioned following Guadalcanal. He didn’t say why he was made an officer, but the word among the men was that he had been outstanding on Guadalcanal.

It was a widespread joke among men in the ranks during the war that an officer was made an officer and a gentleman by an act of Congress when he was commissioned. An act of Congress may have made Hillbilly an officer, but he was born a gentleman. No matter how filthy and dirty everyone was on the battlefield, Hillbilly’s face always had a clean, fresh appearance. He was physically tough and hard and obviously morally strong. He sweated as much as any man but somehow seemed to stand above our foul and repulsive living conditions in the field. Hillbilly had a quiet and pleasant voice even in command. His accent was soft, more that of the deep South, which was familiar to me, than that of the hill country.

Between this man and all the Marines I knew there existed a deep mutual respect and warm friendliness. He had that rare ability to be friendly yet not familiar with enlisted men. He possessed a unique combination of those qualities of bravery, leadership, ability, integrity, dignity, straightforwardness, and compassion. The only other officer I ever knew who was his equal in all these qualities was Captain Haldane.

That night Hillbilly talked about his boyhood and his home in West Virginia. He asked me about mine. He also talked about his prewar years in the Marine Corps. Later I remembered little of what he said, but the quiet way he talked calmed me. He was optimistic about the battle in progress and seemed to understand and appreciate all my fears and apprehensions. I confided in him that many times I had been so terrified that I felt ashamed, and that some men didn’t seem to be so afraid. He scoffed at my mention of being ashamed, and said that my fear had been no greater than anyone else’s but that I was just honest enough to admit its magnitude. He told me that he was afraid, too, and that the first battle was the hardest because a man didn’t know what to expect. Fear dwelled in everyone, Hillbilly said. Courage meant overcoming fear and doing one’s duty in the presence of danger, not being unafraid.

The conversation with Hillbilly reassured me. When the sergeant came over and joined in after getting coffee, I felt almost lighthearted. As conversation trailed off, we sipped our joe in silence.