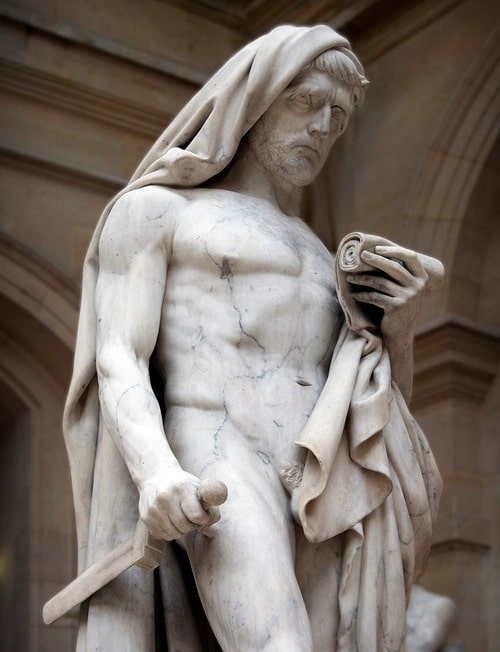 Editor’s Note: This is a guest post from Rob Goodman and Jimmy Soni, co-authors of Rome’s Last Citizen: The Life and Legacy of Cato.

Cato the Younger—the great Roman soldier, senator, and Stoic—was a hard man to like. He was ungracious in his friendships, uncompromising in his politics, blunt in his conversations, yet able to talk the Roman Senate’s ears off from sunup to sundown. We’re fairly confident that he wouldn’t have liked us, either. But we were fascinated enough by Cato to write his biography, and to tell the story of how he became the last man to stand against Julius Caesar in defense of the Roman Republic. For us, the most admirable part of his character is something entirely unexpected in an ancient Roman culture so conscious of the weight of its own past. He was, in the truest sense of the words, a self-made man.

Cato wasn’t self-made in the familiar sense: he came from a long line of statesmen, and he never had to worry about money. But Cato was self-made in a deeper sense: he made it his life’s work to live deliberately. Many of us find that our character simply happens to us: we spend an inordinate time worrying about what we’d like to accomplish, but give little thought to who we’d like to be. Cato was different. His character—austere, tough, principled to a fault—was a conscious creation.

There are plenty of obvious places in Cato’s life to look for lessons in the art of manliness: his month-long march across the North African desert with the last remnants of troops loyal to the Republic, or his decision to take his own life rather than submit to Caesar’s dictatorship. And to be fair, there are plenty of things in Cato’s life we shouldn’t emulate—for starters, his stubbornness and refusal to compromise for the good of the Republic. Yet we think Cato’s most important lesson in manliness is still worth learning: how we can take control of our character. These are some of the keys to becoming a self-made man.

1. Respect Your Roots—But Don’t Let Them Trap You

Imagine that you had an image of every male ancestor dating back four or five generations. Imagine that they were masks pressed in wax from the flesh at the moment of death, then copied in stone to hang on your wall. Imagine, in other words, that these were literally the faces of your father, and his father, and his, watching every one of your comings and goings. If you can picture that, you can understand something of what it meant to be a Roman, and something of what it meant to feel your roots as a living, palpable presence.

And if you want to understand what it meant to grow up as Cato, then add this detail. Most days, you would also have to walk past a life-sized public statue of your sainted great-grandfather, complete with an inscription honoring him for saving his country “when the Roman state was tottering to its fall.”

Many of us, in Cato’s position, would be paralyzed by the weight of the past. Cato was different. He didn’t run away from his roots: at the age of 18, he made his first public splash by saving a public hall built up by his great-grandfather from renovations, and he made his mark in Roman politics as a defender of the mos maiorum (“the way of the ancestors”). But he also knew when to depart from the past and make his own way. He expressed his independence most publicly when, as a young man, he committed himself to a philosophical school with a suspect, foreign, and cultish reputation: Stoicism.

Stoicism was a Greek philosophy that had been exported to Rome just a few generations before Cato came on the stage. It taught its adherents that they could have an unshakable happiness in this life, one that was safe from any loss or disaster—because the key to happiness was virtue. The road to virtue, in turn, lay in understanding that destructive emotions, like anger and fear, are under our conscious control—they don’t have to control us, because we can learn to control them. As Brett and Kate explained on this site last year, Stoicism has a lot to do with “self-sufficiency and self-control.”

Why would Romans of Cato the Younger’s time object to that? First and foremost, Stoicism was foreign. And in Rome, that was a grave strike against it. Cato the Elder’s xenophobic opinions, left in a letter to his son, weren’t too far outside the mainstream:

“In due course, my son Marcus, I shall explain what I found out in Athens about these Greeks….They are a worthless and unruly tribe. Take this as a prophecy: when those folk give us their writings they will corrupt everything.”

The movement was also mocked for its outlandish paradoxes, eyeball-grabbing statements meant to serve as an introduction to the Stoic way of life. Opposing Cato in a high-profile court case, Cicero ridiculed these Stoic beliefs:

“That wise men, no matter how deformed, are the only beautiful men; that even if they are beggars, they are the only rich men; that even in slavery, they are kings. And all of us who are not wise men, they call slaves, exiles, enemies, lunatics. They say that all offenses are equal, that every sin is an unpardonable crime, and that it is just as much of a crime to needlessly kill a rooster as to strangle one’s own father!”

While Cicero wasn’t fabricating those paradoxes, he was ignoring the deeper concepts they were meant to illustrate. But most Romans stopped where Cicero did in that trial, laughing at the provocative packaging of Stoic ideas without considering their content.

So when Cato adopted Stoicism—and eventually became the public face of the philosophy—he was taking a significant risk. But Cato’s choice was his own declaration of independence. It showed that he knew when to honor the Roman past, and when to leave it behind. That was the same independence of mind that would make Cato a pivotal figure in Roman history. And through the force of his example, Cato made Stoicism respectable. If you know how influential Stoicism would become, you understand just how important Cato is.

2. Don’t Be Afraid to Be Ridiculous

As part of his education, Cato sought to teach himself “to be ashamed only of what was really shameful.” It meant wearing outmoded and odd-colored clothing, walking barefoot in all weathers, going without creature comforts, and silently enduring abuse and insults. The ancient biographer Plutarch notes that Cato was mocked by ambitious friends for not jumping straight into politics. The imperial Stoic Seneca relates the story of the time Cato was attacked in the public baths, yet shrugged off the incident in silence.

Someone who carries himself as unconventionally as Cato is bound to raise eyebrows, or even to provoke attacks. But that’s just what Cato was looking for. Roman Stoicism was not a series of idle speculations and deep thoughts. It was a practical guide to life, and a collection of exercises that could be put to use the day they were learned. Cato learned how to subsist on a poor man’s food, or no food at all, how to speak bluntly and how to shut up, how to meditate on disaster and endure the imagined loss of everything again and again—techniques that were designed to steel him against hardship and concentrate his mind on virtue as the only lasting happiness. Just as a young Teddy Roosevelt vowed, “I will make my body,” Cato must have had a similar resolve: “I will make my character.”

We’ve joked that if our book were ever made into a movie, Cato’s Stoic education would be the obligatory training montage, set to an ‘80s rock song. But there’s a larger point here: becoming self-made isn’t just something you think. It’s something you do. It isn’t just coming to the right conclusions. It’s putting those conclusions into practice—literal practice, deliberately training ourselves in the habits we want until they become second nature.

Cato always cast himself as a traditionalist in his politics, the defender of Rome’s ancient liberties in a time of encroaching autocracy. Some people have seen a contradiction between his traditionalism in politics and his adventurousness in philosophy. But we think they’re missing the point.

Becoming a self-made man didn’t require Cato to turn wildly countercultural. It simply gave him the freedom to examine the dominant culture with clear eyes—and when he deliberately rejected parts of that culture, he left a lasting impression. In a city of conspicuous consumption, he lived simply and frugally, even though he inherited great wealth. In a political culture that winked at bribery, corruption, and election-buying, he kept his hands clean. He pioneered a theatrical form of civil disobedience: on a number of occasions, Cato won popular acclaim by forcing his enemies to arrest or physically silence him.

Most intriguingly, Cato sometimes displayed a distinctly un-Roman sympathy for the well-being of conquered peoples and “barbarians.” Once, as Rome celebrated Caesar’s slaughter of an entire Gallic tribe, including women and children, Cato rose in the Senate to demand that the general be tried as a war criminal. It’s a reminder that Stoicism was arguably the first school to teach universal respect for all peoples, an idea transmitted to Christianity and also preserved in the Stoic word “cosmopolitan” (literally, “world-city”).

In fact, we think there’s a lot of Stoicism in the way Cato strove to be countercultural in a deep sense, rather than a superficial sense. Stoicism teaches that we should constantly separate the trivial from the essential, the distractions from the sources of lasting happiness. Cato put that ruthless drive to get at the essentials at the heart of his political life.

4. “Self-Made” Means More Than You Think

If few people are inspired to follow in Cato’s footsteps today, perhaps that’s because we’ve inherited an impoverished idea of what it means to be “self-made.” In America, to be self-made means that you’ve made your own money. But think about how limiting that idea is: every time we repeat the phrase, we’re unconsciously passing on the idea that the only way to make yourself is to make your fortune. We’re celebrating the idea that we are what we earn, and passing over richer ways to be self-made.

If Cato wanted conventional success, it would have been handed to him. He had the pedigree, the name recognition, and the wealth to be a perfectly respectable and forgettable official in the Republic’s governing machine. History remembers him, though, because he made a different choice.

What if we insisted on more room for self-made men in public life today—not in the narrow sense of that phrase, but in Cato’s? From student council elections through the electoral college, public life can look like a continuous weeding-out of the idiosyncratic, the original, and the critical. Year to year, politics is conducted by the same narrow range of eminently safe people. And if they offer the same narrow range of eminently safe and unsatisfactory solutions, should we be surprised?

Would someone of Cato’s courage and originality stand a chance in American politics? It’s not likely—and that’s our loss.

Rob Goodman is a former congressional speechwriter. Jimmy Soni is Managing Editor of the Huffington Post. They are co-authors of Rome’s Last Citizen: The Life and Legacy of Cato.