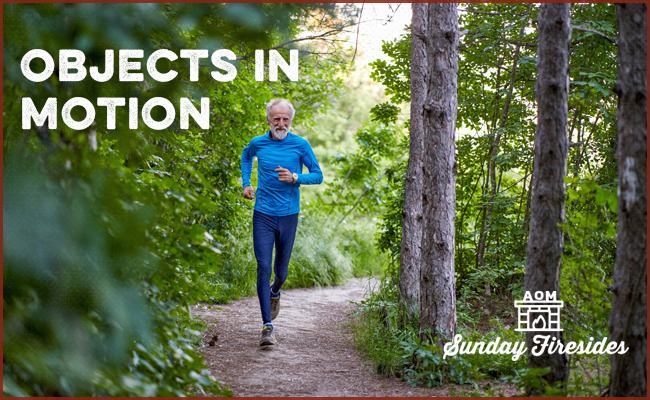 Every neighborhood has one.

He’s the old, eighty-something guy you see running every day. He’s always out at the same time. He’s frequently shirtless.

Chances are, this guy didn’t start running last year. Or a decade ago. Or even forty years back.

Chances are, he started running in college. Or high school. And he hasn’t stopped in the half century since.

According to one law of physics, an object at rest stays at rest, while an object in motion stays in motion.

According to another, it takes more energy to set an object in motion, than it does to maintain its motion.

There’s a corollary in the laws of personal development that’s just as universal and ironclad:

It’s a lot more difficult to get going, than it is to keep going.

Starting a new behavior, staying with it long enough that it becomes habitual, is hard. But once you do, once it becomes a normal, natural part of your life, it becomes easy. You can’t imagine not doing it.

It takes a lot of force, a lot of fuel, for the rocket ship of personal change to escape the gravity of things-as-they-are-now. But once it does, it remains indefinitely in orbit. A perpetual motion machine.

There are implications to this law of life:

If you’re young, take advantage of the surplus of enthusiasm inherent to that stage, and initiate the kind of habits your elderly self will thank you for.

If you’re older, when a surge of “I-want-to-turn-over-a-new-leaf!” energy arises — which happens less and less as you age, but still happens — ride that wave for all it’s worth. You never know when it’s the last burst of brightness in a collapsing star.

Wherever you are, begin. Start today.

Then, when you’re pushing eighty, you’ll be the guy who’s still at it. With any luck, shirtless.