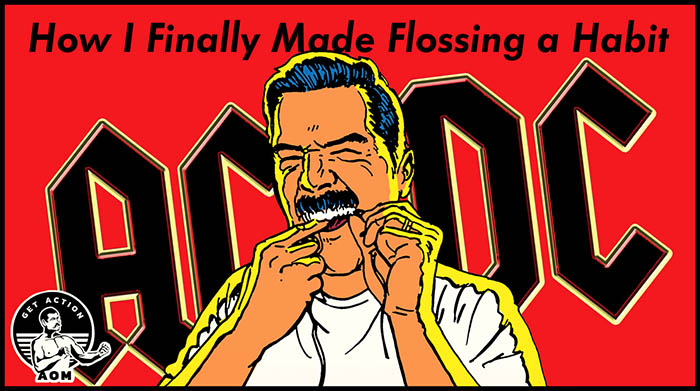 Confession: For most of my life, I haven’t been a consistent flosser.

Brushing my teeth two times a day? No problem.

But flossing? That habit never stuck for some reason.

This personal failure comes into clear focus twice a year, when I visit the dentist for my regular cleaning. The dental hygienist starts using a periodontal probe to plumb the health of my gum tissue. As she pokes the tool along my gum line, she inevitably reaches a point where the probe sinks in further than it should, indicating poor tissue health.

She makes this observation as neutrally as possible. But, in my neurotic, Larry David-esque mind, she sounds absolutely disgusted by my poor periodontal health and thinks I should be positively ashamed of that 4mm pocket.

In fact, I actually call those gum pockets, “pockets of shame.”

When I come home from the dentist, Kate invariably asks me, “Got any pockets of shame?” even though she knows the answer will be yes, because she knows I don’t floss regularly. Salt in the wound.

After the probing and the discovery of more pockets of shame, the hygienist asks, “How’s your flossing going?”

“Oh, I could do better,” I say with a sheepish grin.

“Well, just try to do it at least once a day. It will really help. We want your gums and teeth to be as healthy as possible.” Again, the hygienist is saying this cheerfully and helpfully, but since I’m feeling ashamed of my pockets of shame, my brain interprets the suggestion as a reprimand.

As I drive home noshing on the cookie the dentist gives patients after a visit, I resolve, once again, to become a dedicated flosser.

“As Otis Spunkmeyer as my witness, I will never have pockets of shame again!”

I do act to follow through on this conviction. Every night after my shameful visit to the dentist, I floss.

But without fail, two weeks later, I’ve fallen off the wagon.

Six months later, I get a reminder that my next dental appointment is in a week. I furiously try to cram six months of flossing into one week.

And the cycle repeats itself again like some Buddhist morality story.

I figured I’d be stuck in this infinite cycle of flossing failure and periodontal shame forever more.

Instead, I finally found a way to escape the flossing ouroboros and reach periodontal nirvana.

For the past three months, I have not missed a single night of flossing. That’s the longest flossing streak I’ve ever had in all the years I’ve sported a full set of teeth.

To thank for that, I have a behavioral scientist and AC/DC.

A few weeks before the beginning of the new year, I read behavioral scientist BJ Fogg’s book Tiny Habits. (In February, I had him on the AoM podcast to talk about it.) In his book, Fogg lays out research-backed tactics to turn any intention into an ingrained habit.

After boning up on his tips, I immediately started implementing them to finally turn flossing into a habit for myself. Since that time, I haven’t missed a single night of flossing.

Fogg’s Behavioral Design Model is a very clear, multi-faceted approach to making good habits or breaking (he prefers the word “untangling”) bad ones. Every part of the model can be tweaked based on your current situation and personal goals.

Two parts of Fogg’s Behavioral Design Model were extremely powerful in making flossing a habit for me:

Fogg makes the intuitive observation that the bigger and more challenging your goal, the more motivation you need to achieve it.

One of the big obstacles that keeps people from forming good habits, consequently, is that they swing for the fences, thinking that the high level of motivation they feel upon initially setting the goal, will stay with them.

Of course, it doesn’t. And when their motivation invariably flags, people say, “To hell with it!” and chuck the idea altogether.

To counter this tendency, Fogg recommends making your habit as tiny and easy as possible, which largely takes the motivation factor out of the equation.

For the flossing habit, that means making it a goal to floss just one tooth a night.

That’s it. One single tooth.

Now, flossing just one tooth (you’re of course getting in-between two teeth, technically), isn’t going to improve your overall periodontal health right away. But that’s not the point. The point is to make the act of flossing a habit, which will eventually lead to improved gum health. Even if you’re tired and want to crawl into bed after brushing your chompers, all you have to do to feel successful is to floss a single tooth.

So that’s what I did. Every night I’d floss one lone tooth after brushing my teeth. I’d change which tooth I flossed each night, but it was always just one.

“Okay, fine,” you might be thinking, “So you’ve made it a habit to floss just one tooth. But when do you up your goal and add more teeth?”

Fogg has a surprising answer here: you don’t.

This is how it played out in my own experience. I found myself naturally, painlessly, voluntarily, adding in more teeth as the days went on until eventually, I flossed all my teeth in a single session. But I’ve never upped my goal; it’s still to floss just one tooth. Thus as Fogg predicts, when I floss all my teeth each night anyway, I feel like an awesome overachiever. I go to bed feeling like a boss.

Very occasionally there’s still a night when I’m really tired and just want to crawl into bed without flossing at all. On those nights I go back to flossing just one tooth. What I never say anymore, however, is, “To hell with it!” In the world of Tiny Habits, doing something is always better than doing nothing.

So starting small with one tooth played a big role in my flossing habit, but what really put the habit formation process into overdrive was celebrating each time I successfully completed my goal.

And that’s where AC/DC comes in.

Flossing Your Teeth to a Celebratory Soundtrack

A key component in the Fogg Behavioral Design Model is that emotions create habits. Not repetition. Not willpower. Emotions.

If something feels good when you do it, you’ll keep doing it. Plain and simple.

The trick, though, is that the good feeling must come right after you do the behavior. Sure, I’ll feel good when the dental hygienist tells me I have no pockets of shame on my next dental visit, but that’s too far in the future to have much of an effect on my behavior now.

So how do you make yourself feel positive emotions after flossing a single tooth?

According to Fogg, you celebrate this tiny achievement. Your celebration can take any form. It just has to be 1) immediate, and 2) genuinely make you feel good.

For some people, a simple smile will work as a celebration. For others, a fist pump in the air does the trick.

I tried those, but they didn’t really work for me. They didn’t allow me to experience what Fogg calls “shine” — the warm glow of victory.

But then I stumbled onto a celebration that turbocharged the formation of my flossing habit: I sing/mouth the intro guitar riff of AC/DC’s “Back in Black” every time I floss a tooth. In my mind, I’m imagining AC/DC putting on a personal concert to celebrate my flossing.

When I’m by myself, I audibly make the noise. If Kate’s in the bathroom, I go completely imaginary so she doesn’t have to hear me beatboxing the riff. I’m a thoughtful husband.

Three months in I’m still having imaginary AC/DC concerts in my head while I floss.

Is it silly? Well, it works, so who cares?

There you have it. How I finally made flossing a habit. Start off flossing just one tooth. Immediately celebrate with AC/DC.

This method could be tweaked and used for a whole host of habits. Drinking water. Eating veggies. Doing push-ups. Journaling. Meditation.

I highly recommend checking out the interview I did with BJ. We go into his models and methodologies with more detail. It really is powerful, life-changing stuff.

I’m looking forward to my next visit with the dental hygienist. When she tells me I have no pockets of shame, I’ll ask her to please remove the periodontal probe from my mouth, to better break out into a little “Back in Black.”