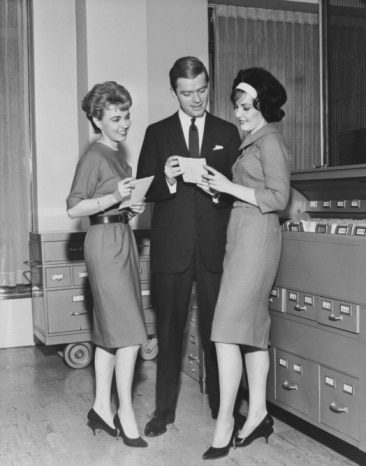 But there is a difference between the two sets of manners.

In the social sphere, the assumption is that you and your associates are equals, with some allowances made for age and sex.

The business world, on the other hand, is a hierarchy. Whether you work at a traditional, highly-stratified corporation, or a modern and casual upstart, whether the hierarchy is spelled out, or entirely unspoken, one exists. Just step on some toes and see what happens. Business etiquette dictates that employees defer to employers, sellers defer to buyers, and seekers defer to sought-afters.

This difference in the dynamic of social and business relations accounts for things like the fact that when you make introductions outside of work, you always introduce the man to the woman, while in the business world, you make introductions based on rank and importance, regardless of gender. So if you’re introducing a male CEO and a female employee, you would say, “Mr. Robert BigCheese, I would like to introduce Mrs. Samantha Underling from accounting,” rather than the other way around. (Note: if Mr. Graham was meeting a client (of either sex) as opposed to an underling, the client’s name would go first; remember, the seller defers to the buyer.)

This is also why your boss can call you by your first name, but you shouldn’t reciprocate, unless he or she has specifically invited you to drop the Mr. or Mrs.

Another difference between the rules that dictate etiquette in the social and business worlds is that in the social sphere, etiquette doesn’t necessarily have to be efficient or practical; in fact, this can be part of its charm. But in the workplace, tradition matters less and getting the job done matters more.

So for example, while in a social situation you would want to stand when a woman entered the room, at work you should rise from your desk when receiving visitors of either sex, and you shouldn’t stand up every time a female secretary or assistant walks in and out of your office.

Those caveats aside, the rules of business etiquette and social etiquette are not so different; it’s all about acting with integrity, knowing the appropriate behavior for a particular situation, behaving in ways that show respect, and treating others as you’d like to be treated.

While certain areas of business etiquette deserve their own posts, today we will outline some general dos and don’ts for being a gentleman at the office.

Dress with respect. Be clean and presentable each and every day. Follow the office dress code at a minimum—and don’t be the guy who constantly toes the line. Of course it’s fine to dress a cut above everyone else, but just a cut. Dressing up far beyond the standard sported by everyone else will come off as putting on airs.

On another style note, while you might take off your jacket and roll up your sleeves during the day, when there are visitors present in the office or you’re receiving callers, put your jacket back on and present a professional appearance that reflects well on your company.

Come to work with teeth brushed and body washed. Your co-workers are stuck with you in a small space for eight or more hours a day. Don’t make them avoid your cubicle like the plague as they gather to discuss whether presenting you with a gift basket of soap and chewing gum would send too overt a message.

Keep things pleasant with your co-workers. Unlike friends, if things get awkward with your co-workers, you cannot choose to stop seeing them. No, cause an uncomfortable rift with a co-worker, and you’ll have to look at their contemptible face each and every day for months, and maybe years. So keep your relations with them pleasant. This means not delving too much into your private life, avoiding discussion of topics like religion and politics, and typically choosing to ignore annoying habits, rather than calling attention to them (although every man has his breaking point).

When it comes to dating at work, don’t risk it unless she’s someone you truly connect with. And if you do pursue something with a co-worker, review your company’s policy on such relationships and let HR know what’s going on.

Keep company secrets, secret. Our Wiki-leaks-loving generation tends to scoff at the notion of keeping anything secret. And yes, your company’s secrets may seem so boring or unimportant as to not even be worth the effort of keeping them under wraps. But no matter—they’re still nobody’s business. Even if the spilling of secrets doesn’t cause actual harm to your company, doing so will still make you look careless.

So keep your files tucked away when receiving visitors, guard your end of the phone conversation when a visitor is standing nearby, and if outsiders ask you questions that might reveal company secrets, simply give intentionally vague answers–never volunteer any information they could not have otherwise been gleaned from the news. If information is truly confidential, don’t send it over email. There’s no such thing as a “private” email; they can be monitored by your company, and sometimes retrieved long after they’ve been “deleted.”

Finally, don’t volunteer more information than necessary: “Dan is not in today,” not “Dan’s not here. He’s meeting with the head of mergers at Dyna Corp.”

Work with your boss—not against him. Keep him informed. Let him know when you’ve made a mistake so he doesn’t paint himself into a corner out of ignorance. Back him up–if you have concerns about something, let him know in private instead of airing your grievances at an open meeting.

When you use the last of something, replace it. Whether it’s the last paper in the copy machine or the last cup of joe in the coffee maker, don’t just walk away—replace the paper and make another pot. Ditto for copy machine paper jams—don’t whistle as you slowly slink off. Fix it.

Treat your underlings with kindness and respect. They keep the office running. And you never know if that lowly clerk will one day be your boss.

Respect the chain of command. Both up and down. Don’t step on anybody’s toes. Don’t go over your boss’s head without permission.

Hold the door for people approaching the elevator. Don’t hide in the corner while secretly wishing for the doors to close as quickly as possible.

If you’re using speaker phone, let the person(s) you’re speaking with know who else is on the call with you before you begin the conversation. That way, they will not be confused when another person’s voice suddenly pops in later on.

Bring donuts or bagels to a meeting every once in a blue moon. This is not expected of you. But if you do it, you’ll be a hero.

Pass the buck. Generally, making excuses reflects more poorly on your character than admitting the mistake would have on your competence. If you blame an underling, you reveal yourself to be a mediocre leader, for you should have seen to it that the job got done correctly. If you blame an equal, you simply look like a whiner and run the risk of souring your relationship with someone with whom you’ll likely have to continue to work. And if you blame a higher-up…well common sense dictates that it’s not a good idea to anger the people who hold your job in their hands.

Come late to meetings. Your late arrival is disruptive and may prolong the meeting if they have to wait to get started until you get there or if they have to catch you up on what has already been discussed.

Linger at someone’s desk. Nothing wrong with stopping by to say hello to your cubicle buddy. But, if after some brief chit-chat, your co-worker shows signs of trying to get back to work, move on!

Eat other people’s food. The crime that launched a thousand passive-aggressive notes.

Eavesdrop on co-workers’ private phone calls. Now obviously if someone is having a conversation a cubicle over, it’s impossible not to hear what they’re saying. But you can certainly pretend like you don’t hear. In other words, if Bob just got off the phone from having an argument with his teenage son, don’t saunter over and ask, “What’s the problem with young Johnny, Bob?” If your co-worker wants to bring up the topic with you, then let him initiate that conversation. Otherwise, consider what you heard to be off-limits.

Listen to radio/music/Youtube videos without headphones. Not everyone shares your affinity for Enya.

Let your personal life get in the way of your business life. Always maintain a business-like attitude. This doesn’t mean being cold or aloof from others. What it means is that your personal life should very rarely interfere with getting work done. Not that you can’t leave early because your kid got sick, but that you don’t come in late because you got plastered the night before, you don’t ask the boss for a raise because you just had a baby, and you don’t spend half your time at work arguing with your ex-wife about alimony payments.

Come back and visit your old office. And now we return to the point made at the beginning of the article: the business world is different from the social world. In the social sphere, when you make close relationships, the expectation is that those relationships will last no matter where life takes you. At the office, you might develop relationships that feel very close with your co-workers, but once you move on, those relationships typically do too. When you leave a company to take another job elsewhere, don’t come back to your old workplace expecting to be heralded as a long lost friend. People will find the situation a little awkward and you a good deal lame.

What are some more dos and don’ts for being a gentleman at the office? Sound off in the comments!