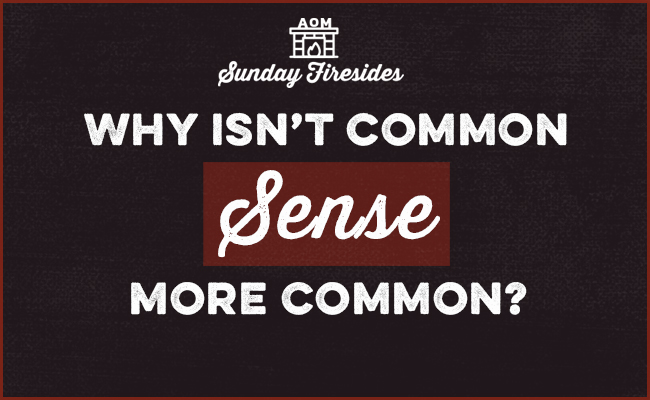 Every time you turn around, you see decisions being made by individuals and institutions that seem head-scratchingly hard to comprehend. In light of the facts on the ground, the wisest course seems obvious, and yet the very opposite path is chosen.

If it seems we’re suffering a deficit in common sense, it’s for this reason: there are multiple meanings of sense, the cultivation of common sense requires most of them, and they’ve all gone missing.

The sense in common sense rests first on an awareness of where you are, where you’re going, and how to get there — a sense of direction. But this sense is only possible when you have a destination in mind, and whether on a personal or societal level, we generally don’t.

Making decisions always involves weighing risks and rewards. When you have a telos — an ultimate aim — these judgements can be made on the basis of whether something takes you closer or further from it; when you don’t, making such judgements is impossible. Instead, decisions are made willy-nilly — according to which voices, fears, and circumstances are loudest and most pressing in the moment.

Without a sense of direction, there can be no sense in terms of meaning, either. There is no understandable why behind the decisions that are made, which randomly run one way, and then the other.

Without a sense of direction or meaning, disorientation results. Paralyzed by this uncertainty, we stop trusting in the senses most fundamental to the functioning of common sense: touch, taste, smell, hearing, and particularly sight. Rather than assessing what is happening right in front of their eyes, people turn to outside experts to tell them what to do.

And so we arrive in a place where folks form decisions contrary to their firsthand observations. Which, had we any sense, we’d realize doesn’t make any.