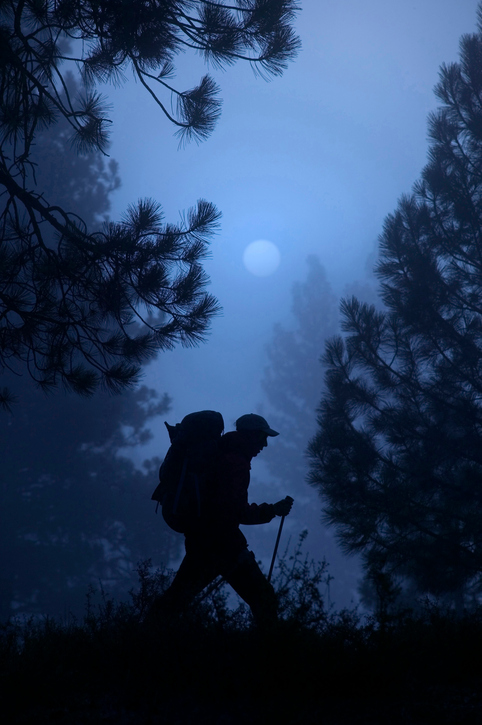 Editor’s note: “If you want to start incorporating microadventures into your life,” Alastair Humphreys writes in Microadventures, the most important thing to do is change your perspective. . . . One way to help this mind shift is by going somewhere you know very well, but at night.”

There is indeed something special about getting out and exploring at night. With your sight dimmed, other senses are heightened. You observe and notice more. Even ordinary, familiar places look different. Inner stillness is easier to come by, and your mind will often feel rejuvenated and inspired.

Henry David Thoreau wrote of the magic of nighttime walks in “Night and Moonlight.” Below you’ll find a condensed version of that essay. Try taking your own moonlit walk — even just around the neighborhood — and experience what Thoreau describes for yourself. 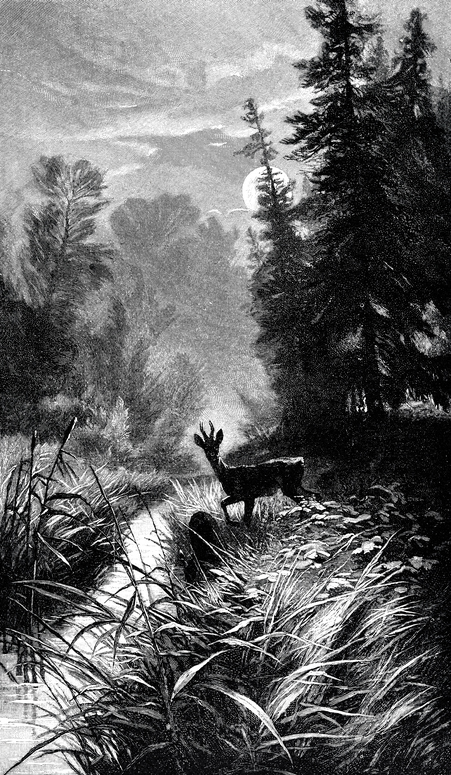 Chancing to take a memorable walk by moonlight some years ago, I resolved to take more such walks, and make acquaintance with another side of Nature. I have done so.

I shall be a benefactor, if I conquer some realms from the night — if I report to the gazettes anything transpiring about us at that season worthy of their attention — if I can show men that there is some beauty awake while they are asleep — if I add to the domains of poetry.

Night is certainly more novel and less profane than day. I soon discovered that I was acquainted only with its complexion; and as for the moon, I had seen her only as it were through a crevice in a shutter, occasionally. Why not walk a little way in her light? Suppose you attend to the suggestions which the moon makes for one month, commonly in vain, will it not be very different from anything in literature or religion? But why not study this Sanskrit? What if one moon has come and gone, with its world of poetry, its weird teachings, its oracular suggestions — so divine a creature freighted with hints for me, and I have not used her — one moon gone by unnoticed?

It must be allowed that the light of the moon, sufficient though it is for the pensive walker, and not disproportionate to the inner light we have, is very inferior in quality and intensity to that of the sun. But the moon is not to be judged alone by the quantity of light she sends to us, but also by her influence on the earth and its inhabitants. “The moon gravitates toward the earth, and the earth reciprocally toward the moon.” The poet who walks by moonlight is conscious of a tide in his thought which is to be referred to lunar influence.

Many men walk by day; few walk by night. It is a very different season. Take a July night, for instance. About ten o’clock — when man is asleep, and day fairly forgotten — the beauty of moonlight is seen over lonely pastures where cattle are silently feeding. On all sides novelties present themselves. Instead of the sun, there are the moon and stars; instead of the wood thrush, there is the whippoorwill; instead of butterflies in the meadows, fireflies, winged sparks of fire! — who would have believed it? What kind of cool, deliberate life dwells in those dewy abodes associated with a spark of fire? So man has fire in his eyes, or blood, or brain. Instead of singing birds, the half-throttled note of a cuckoo flying over, the croaking of frogs, and the intenser dream of crickets — but above all, the wonderful trump of the bullfrog, ringing from Maine to Georgia. The potato vines stand upright, the corn grows apace, the bushes loom, the grain fields are boundless. On our open river terraces, once cultivated by the Indian, they appear to occupy the ground like an army — their heads nodding in the breeze. Small trees and shrubs are seen in the midst, overwhelmed as by an inundation. The shadows of rocks and trees and shrubs and hills are more conspicuous than the objects themselves. The slightest irregularities in the ground are revealed by the shadows, and what the feet find comparatively smooth appears rough and diversified in consequence. For the same reason the whole landscape is more variegated and picturesque than by day. The smallest recesses in the rocks are dim and cavernous; the ferns in the wood appear of tropical size. The sweet-fern and indigo in overgrown wood-paths wet you with dew up to your middle. The leaves of the shrub oak are shining as if a liquid were flowing over them. The pools seen through the trees are as full of light as the sky. “The light of the day takes refuge in their bosoms,” as the Purana says of the ocean. All white objects are more remarkable than by day. A distant cliff looks like a phosphorescent space on a hillside. The woods are heavy and dark. Nature slumbers. You see the moonlight reflected from particular stumps in the recesses of the forest, as if she selected what to shine on. These small fractious of her light remind one of the plant called moonseed — as if the moon were sowing it in such places.

In the night the eyes are partly closed, or retire into the head. Other senses take the lead. The walker is guided as well by the sense of smell. Every plant and field and forest emits its odor now — swamp-pink in the meadow, and tansy in the road; and there is the peculiar dry scent of corn which has begun to show its tassels. The senses both of hearing and smelling are more alert. We hear the tinkling of rills which we never detected before. From time to time, high up on the sides of hills, you pass through a stratum of warm air: a blast which has come up from the sultry plains of noon. It tells of the day, of sunny noontide hours and banks, of the laborer wiping his brow and the bee humming amid flowers. It is an air in which work has been done — which men have breathed. It circulates about from woodside to hillside, like a dog that has lost its master, now that the sun is gone. The rocks retain all night the warmth of the sun which they have absorbed. And so does the sand: if you dig a few inches into it, you find a warm bed.

You lie on your back on a rock in a pasture on the top of some bare hill at midnight, and speculate on the height of the starry canopy. The stars are the jewels of the night, and perchance surpass anything which day has to show. A companion with whom I was sailing, one very windy, but bright moonlight night, when the stars were few and faint, thought that a man could get along with them, though he was considerably reduced in his circumstances — that they were a kind of bread and cheese that never failed.

How insupportable would be the days, if the night, with its dews and darkness, did not come to restore the drooping world! As the shades begin to gather around us, our primeval instincts are aroused, and we steal forth from our lairs, like the inhabitants of the jungle, in search of those silent and brooding thoughts which are the natural prey of the intellect.

Richter says, that “the earth is everyday overspread with the veil of night for the same reason as the cages of birds are darkened, namely, that we may the more readily apprehend the higher harmonies of thought in the hush and quiet of darkness. Thoughts which day turns into smoke and mist stand about us in the night as light and flames; even as the column which fluctuates above the crater of Vesuvius in the daytime appears a pillar of cloud, but by night a pillar of fire.”

There are nights in this climate of such serene and majestic beauty, so medicinal and fertilizing to the spirit, that methinks a sensitive nature would not devote them to oblivion, and perhaps there is no man but would be better and wiser for spending them out of doors, though he should sleep all the next day to pay for it.

The Hindus compare the moon to a saintly being who has reached the last stage of bodily existence. Great restorer of antiquity, great enchanter! In a mild night, when the harvest or hunter’s moon shines unobstructedly, the houses in our village, whatever architect they may have had by day, acknowledge only a master. The village street is then as wild as the forest. New and old things are confounded. I know not whether I am sitting on the ruins of a wall, or on the material which is to compose a new one. Nature is an instructed and impartial teacher, spreading no crude opinions, and flattering none; she will be neither radical nor conservative. Consider the moonlight, so civil, yet so savage! The light is more proportionate to our knowledge than that of day. It is no more dusky in ordinary nights than our mind’s habitual atmosphere, and the moonlight is as bright as our most illuminated moments are.

Be sure to listen to our podcast with Erling Kagge about the magic of walking: