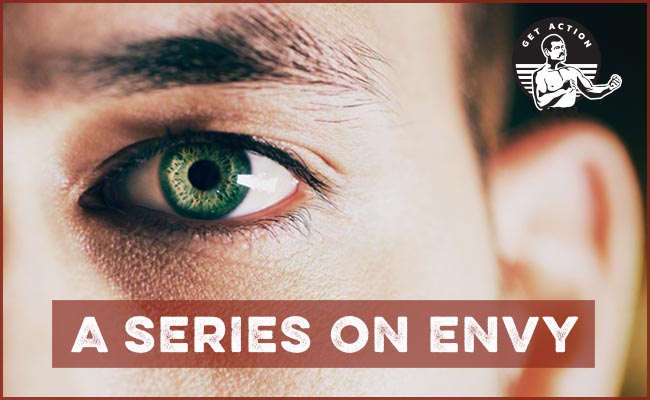 Welcome back to our occasional, ongoing series exploring the nature of envy.

In the previous article, we defined what envy is.

We based our definition of envy on Aristotle’s: pain at the good fortune of others.

We also experience envy when we feel joy at the bad fortune of others. The Germans call that schadenfreude.

We experience envy when we compare ourselves to others, particularly people who are similar to us. You probably don’t feel envy towards Jeff Bezos for his wealth, but you likely turn green with it when you hear that your co-worker got a big raise.

There’s another feeling that often accompanies envy, and it’s one that philosophers have found particularly worthy of examination. Like envy itself, it not only makes us feel bad, but also is a vice which can canker our character.

Envy is, again, pain at the good fortune of another person. When you — whether consciously or unconsciously — blame the envied person for causing you that pain, that creates a form of resentment.

Resentment is a complex emotion. It describes the displeasure — the anger, disgust, and contempt — you feel towards someone you think has wronged you in some way or violated some code of values. Marked by a sense of indignation, resentment is often born from the perception that you (or those you care about) have been treated unfairly.

Sometimes feelings of resentment are justified. If a co-worker gets a promotion because he dishonestly took credit for an idea that was actually yours, you’re going to feel understandably indignant. If your brother’s drug problem has caused all kinds of headaches and heartache for your parents, you may come to resent him.

With resentment born from envy, however, the “offender” doesn’t know he or she has done something that’s affected you (they may, in fact, not know you, period!). They committed no intentional act of malice towards you or others. You simply feel resentful at what they have or who they are. You perceive that they got what they have unfairly, this causes you pain, and you categorize them as the source of your pain. It may not even be that you think someone has directly done something to you, but simply a sense, born of a scarcity-mindset, that because they have gotten something good, there’s less of it for you; they have in some way robbed you of a reward or quality that you desire for yourself. You essentially end up blaming someone for existing.

Resentment is a silent emotion. You usually don’t express it like outright anger. Instead of burning white hot, it smolders inside you. People often don’t know that you resent them. When resentment outwardly manifests itself, it usually does so through passive aggression. You might ignore people, snip at them, or gossip about them behind their backs. Resentment is sneaky.

Every now and then, resentment can flare up, and you suddenly lash out at people with words or even violence.

Ressentiment and the Inversion of Values

The pain that arises from envy can be described as dissonance: the discomfort that emerges in the gap between where you are and where the person you envy is — between what someone else has or is and what you think you should have or be.

There are two ways to close that gap, and eliminate that uncomfortable dissonance.

The first is to strive upwards, towards the person you envy, in order to attain or achieve what they have attained or achieved.

The second is to pull the person down, so that you no longer perceive them as being above you in any way.

We do this by denigrating someone’s success — finding ways to say that their achievements or virtues aren’t actually so great, and definitely don’t make them better than us.

“Yeah, that guy got the promotion, but he had to degrade himself with office politics and brown-nose to get it.”

“Yeah, that guy is a better artist than me, but I bet his family life is in shambles because he focuses so much on his work.”

“Yeah, that guy’s business is booming, but it’s only because he engages in so much hyped-up marketing on social media.”

“Yeah, that guy’s really ripped, but who’d want to be a meathead who spends so much time in the gym?”

When this denigration project happens on a society-wide scale, it represents a manifestation of what philosophers call ressentiment.

Ressentiment is the French word for the English resentment, and has a distinct set of psycho-philosophical dimensions.

Soren Kierkegaard was the first to explore the concept of ressentiment philosophically. In his book Two Ages, he describes the way that the passionless masses of men, who are stuck in the realm of thought and abstraction and too afraid to ever make a bold decision, envy the world’s few passionate risk-takers and their ability to take real action. This envy, Kierkegaard argued, leads to ressentiment, which fuels a desire to hammer down any who dare stick out their heads. He called this whack-a-mole dynamic, in which the crowd essentially says — “If all can’t be great and noble, then no one can!” — leveling. Leveling operates through the media which exposes, lampoons, or, as we’d say in modern parlance, “cancels,” various figures who may think differently, and through the abstract-yet-powerful current of public opinion, which acts as an invisible force of gravity, cowing people from attempting anything new or revolutionary in the first place.

A few decades after Kierkegaard, Nietzsche explored this idea of ressentiment in several of his writings, particularly On the Genealogy of Morality. Nietzsche argued that envy-induced ressentiment not only drives the masses to bring the noble and great ones down to their level, but compels them to go a step further still — to assert that what might seem to make themselves inferior, is actually what makes themselves superior. In what Nietzsche described as an inversion of values, that which was once considered bad in antiquity becomes good in modernity: vulnerability becomes courage; meekness and poverty become blessings. Nietzsche argued that the ethical codes of Judaism and Christianity actually grew out of the weak’s envy-fueled ressentiment for the strong. To deal with the pain of inferiority, the weak recast their disadvantages as superiority-conveying strengths.

Nietzsche called these inverted ethical codes “slave morality,” and described them as feckless and intellectually dishonest; while recasting the hierarchy of values in a new upside-down light made the weak feel better about themselves, they nonetheless remained enslaved to their deficiencies, and continued to lack the power and strength they really desired.

The tricky thing about the concept of envy-induced resentment/ressentiment, is that it’s always easier to see its manifestations in others, than it is to recognize it in ourselves. Do we resent someone because they’ve committed a true injustice, or because we simply want what they have? Are people criticizing us because they’re filled with ressentiment, or because our ideas and behaviors are, in fact, damaging and dumb? How easy it is to dismiss one’s “haters” as merely being jealous, rather than really examining what you’re doing in the world!

So while the concept of ressentiment is useful in understanding the motivations for how others treat you, as well as in diagnosing what is at the heart of societal dynamics, you also have to continually train that lens back on yourself. To what extent are your feelings and actions driven by envy-fueled resentment?

This is an extremely difficult assessment to make! Our egos want to justify our beliefs. It’s hard to parse whether you resent someone’s success because it truly is unfair and unearned and based on dishonesty, hype, or mediocre work, or, because you simply yearn for the same status, rewards, and accolades, and feel frustrated that they aren’t coming your way.

But even if your motivations for indignation cannot typically be cleanly untangled, it’s actually helpful to always assume that there is some envy behind it. One, because even in situations where some resentment does seem objectively justified, there still almost always exists an element of envy lurking in the wings as well; and two, because the way you should respond to the personal potential for envy is healthy, and the best way to approach life, regardless of the actual degree of envy’s sway.

Both Kierkegaard and Nietzsche believed that ressentiment was rooted in evasion — the search for a scapegoat to blame for your mediocrity and misery. Its antidote, then, was to directly engage — to take full responsibility for your life. If the person with ressentiment says, “I’m miserable, and it’s everyone else’s fault!” then the Ubermensch asks, “What can I do to improve my lot in life?” While a person with resentment is passive and reactive, the person who owns his life is dynamic and active. Nietzsche argued that the more active you become — the more you concentrate on playing, dancing, creating — the less you even notice what other people are up to.

Whatever is bringing you down, adopting an active stance puts you in the best position to tackle it.

It thus behooves us to always believe that there is some envy-induced resentment underlying our criticisms and contempt. Not only because there invariably is, but because owning that knowledge will ever push us towards a higher range of action.