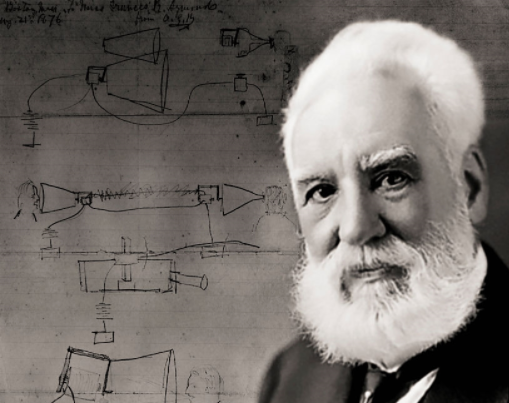 Alexander Graham Bell possessed one of the most fertile and brilliant minds in modern history. Though he is famous for inventing the telephone, he also developed or helped develop a photophone (which wirelessly communicated sound on a beam of light), a proto-metal detector, the airplane that made the first manned flight in the British Commonwealth, and a hydrofoil watercraft that set a marine speed record which stood for a decade.

Bell also had some legendarily eccentric work habits. With his shabby tweed clothes and bushy, often unkempt hair and beard, he was every inch the scientist savant. His offices and laboratories were environments of creative chaos, overflowing with enormous stacks of papers, books, and sketches, and strewn with wires, batteries, and research supplies of all kinds. Bell also preferred to work through the night, going to bed as the sun came up, and sometimes driving himself so hard that the effort brought on migraine headaches. In more relaxed moments, he would skinny-dip in the lake by his summer home, floating on his back while puffing on a lit cigar, and the eruption of a thunderstorm might find him dashing outside in swimsuit and rubber boots to immerse himself in the natural spectacle.

While your mileage in adopting these unconventional habits will vary, there was one unique method of Bell’s that might be more universally worth trying: using location-based prompts to prime your mind for certain tasks.

When Bell was on to some new idea and feeling a surge of inspiration, he could work with obsessive focus. “There is a sort of telephonic undercurrent going on [in my mind] all the while,” the inventor told his wife Mabel, explaining that he had “periods of restlessness when my brain is crowded with ideas tingling to my fingertips when I am excited and cannot stop for anybody.” During such times, Bell went without food or drink, and asked that no one, not even Mabel, disturb him, lest such interruptions burst the gossamer threads of his emerging ideas. “Thoughts,” Bell said, “are like the precious moments that fly past; once gone they can never be caught again.”

However, while Bell’s focus could be laser-like when he was chasing down a eureka moment, much of the time his mind was in fact quite scattered and distracted. While he liked to tinker and dream, he hated getting down to the brass tacks of experimentation; he detested dealing with details, the painstaking effort required to verify intuitions, the tedious process of making minute recalibrations, and then testing and re-resting variables. Unlike his fellow inventor, Thomas Edison, Bell even hated the work of commercializing his inventions — applying for patents and popularizing and improving that which he had already created (while he was proud of developing the telephone, he considered the fuss entailed in protecting its patent and promoting its use an irritating distraction from his other work). He enjoyed intellectual exploration more for its own sake, than any concrete results.

Part of Bell’s difficulty buckling down also simply had to do with his resplendent imagination and wide-ranging curiosity. He was interested in so many different things that he had trouble thinking about a single idea for any span of time. His mind wished to jump from subject to subject and from observation to observation; he enjoyed reading through encyclopedia entries before going to bed, and carried around a pocket notebook to jot down his frequent and varied insights (he had a knack for finding inspiration in any setting).

As Mabel told her husband, “you like to fly around like a butterfly sipping honey, more or less from a flower here or another flower there.”

Bell’s “flightiness” was actually a big part of his genius, which largely rested on his ability to find novel connections between disparate ideas. But his desire to work on many things at once also greatly hindered his progress in moving forward on any one project.

To bring a little organization to his often fragmented thoughts, Bell came up with a method of using what we’ve chosen to dub “location-based prompts.” “Convinced that his physical surroundings induced specific trains of thoughts,” his biographer explains, “he established particular workspaces for particular purposes.”

Although Bell’s primary residence was in Washington D.C., he had also built a home on the headlands of Cape Breton, a remote island in Nova Scotia. At first, his family just spent their summers there, but as Bell got older, he spent more and more of his time living at this picturesque outpost. Dubbed Beinn Bhreagh, the Bell estate included a large house, a laboratory built inside a wooden shed, and a moored houseboat — the Mabel of Beinn Bhreagh.

As Bell’s daughter recalls, her father divided his time between these three different “workstations,” according to the cognitive task at hand:

“In the little office near the laboratory he occupied his mind with problems connected with the experiments; in his study in the house, he thought and worked over his theories of [flight]; while the Mabel of Beinn Bhreagh was the place to think of genetics and heredity.”

When back in D.C., Bell similarly alternated between three different workspaces: Inside his study at home, he concentrated on answering his voluminous correspondence. At the Volta Bureau, which he founded to conduct research related to the deaf, he focused his work on just that (both his wife and mother were deaf, and working with the hearing impaired was the main passion of his life). When he was in the mood to do more abstract thinking, he retreated to a small hut that sat in his son-in-law’s backyard and overlooked Rock Creek.

Using Location-Based Prompts in Your Own Life

There’s actually some neuroscience that shows why Bell’s location-based prompt method can be effective. Every thought and action you take corresponds to a series of neurons in your brain. And these neurons connect to other neurons to make what researchers call neural maps. For instance, when you think of the color red, you don’t just think of the color itself, but also likely an object, say an apple or a fire truck. The color is connected to something concrete in your brain. And it does this for higher-level actions as well. As Caroline Webb notes in How to Have a Good Day, “if you once spent an afternoon cranking out great work while settled into that window seat [at home], your ‘window seat’ neural network might be connected with the one representing ‘extremely productive and focused behavior.'”

Once this connection is established and reinforced, the brain begins creating a well-worn neural pathway: “If I sit down in X location, then I do Y.” These if-then connections between particular locations and particular behaviors/thoughts can help you settle down to work quicker on a task and prime the flow of certain ideas with less effort. Conversely, these prompts can work against doing a different activity in a certain location than the one your mind primarily associates with it. For example, it can be hard to stay motivated to work out at home (outside a dedicated garage gym), because your mind associates the living room with relaxing and snacking, not putting yourself in a state of sweat and pain.

To use location-based prompts to your advantage, first choose different locations for different tasks; see if there are places that feel naturally conducive to working on certain things. We’re not all lucky enough to have as many interesting options as Bell did, but you can use the same technique with locations limited to the four walls of your own home. For example, you might choose to always do budget-related work at the kitchen table, reading in your easy chair, and meditation in your closet.

Then do your tasks in their assigned locations as consistently as you can. At the same time, try not to use the same location for other tasks (as much as possible; you can’t avoid also eating at your kitchen table, of course), as this will create interference with the association you’re trying to create between that environment and the primary activity you use it for. For example, it’s not advisable to watch television or surf your phone while you lie in bed, because you want your bed to be solely connected with sleeping and nothing else. Doing other things in bed besides snoozing weakens the strength of its location-specific prompt and can make it harder to fall asleep.

By using Bell’s method of location-based prompts, and making certain places part of certain rituals, and you may find it easier to buckle down to your tasks. Do what Bell would — experiment and see if it works for you.