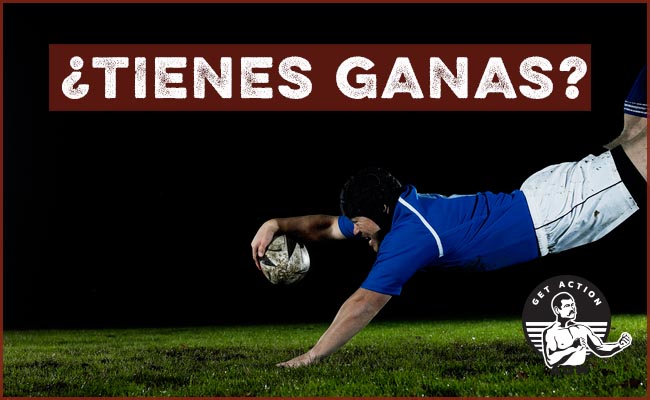 For the past several years, I’ve coached my son’s flag football team.

A few seasons ago, he was feeling pretty upset about a loss that came about due to the team’s lackluster flag pulling.

“How am I going to get better, Dad?” Gus asked me as I put him to bed. “We do flag-pulling drills every practice and you walk us through on technique. Why can’t I pull flags?”

Gus was right. The first thing we do in every practice is go over flag-pulling technique and run flag-pulling drills. So I could see why he was frustrated. He was doing all the right things and yet it wasn’t translating into success.

As I sat there on the bed with my arm around my son, a phrase popped into my mind that I hadn’t heard or said in nearly 20 years.

I lived in Mexico for a couple years in my early 20s. One of my favorite things about Spanish is the words they use to indicate desire or wanting.

To say “I want to eat a taco,” you say “Tengo ganas de comer un taco.”

The literal translation is “I have desires to eat a taco.”

There’s something about the idea of having or not having desire that makes the idea of wanting more visceral for me. You either have the desire, or you don’t.

Ganas is also used as a way to encourage and pump people up.

A soccer coach in Mexico might yell “Echale ganas!” at his players.

The literal translation is something like “Throw desires into it!” Again, the idea is that desire isn’t so much a verb, but a noun. It’s a thing.

The more colloquial translation of “Echale ganas!” is something like “Get cracking!” “Put some life in it!” “Be more enthusiastic!” “Want it!”

When my then 9-year-old son was bummed about his performance in flag football, I knew his problem wasn’t technique. He drilled it enough that his technique was fine.

He was timid and hesitant when going in for the pull. If he missed on the first try, he’d kind of just give up.

I told Gus as much.

“Look, little guy, we can drill flag pulling and go over technique over and over again, but that’s not going to do anything for you in the game.

You have to want it. Really want it.

You have to get that desire for yourself.

Do you get what I’m saying?”

He wiped the crying snot from his nose and reluctantly nodded his head.

I tucked him in his bed, gave him a kiss on the head, and walked out the door thinking that what I had just said probably didn’t land.

But I was wrong.

The next game something was different about Gus. I could sense it during the warm-up. There was a fire in him that wasn’t there before.

Instead of timidly going after a flag, he’d aggressively attack it.

He was diving for flags and getting turf burns.

He was getting in front of runners going full speed just so he could get his hands on the flag.

He was a flag-pulling machine.

That’s the moment flag football changed for Gus. He understood that if he wanted to be a success, he had to really want that success. Not just an intellectual or cognitive want. A bodily and emotional want.

There’s a lesson there for all of us, I think.

When I look back at the goals I’ve accomplished or failed to accomplish, one of the deciding factors was how bad I wanted it. It wasn’t the only factor, mind you, but an important one.

How did I graduate in the top ten in my class in law school? I had some great mentors and used some fantastic study supplements. But I also really, really wanted to do well in law school. That strong desire was what propelled me to study hours and hours a day and do practice exam after practice exam every semester so I could get straight As. I had ganas.

How did I deadlift 600 pounds? I had some amazing coaching. That was vital. But I also really, really wanted to pull 600 lbs. That strong desire was what compelled me to rarely miss a workout for four years. My coach could give me programming and offer corrections on technique, but he couldn’t make me want to go after a 600-lb deadlift. I had to have the desire myself.

Last year I made a goal to learn how to play piano. I gave up after a month. Why? I didn’t really want to do it. Me faltaba ganas. I lacked desires.

I made it a goal to read Aristotle’s Categories a few years ago. I gave up after a week. No me dio ganas de leer. It didn’t give me desires to read.

Whenever I’m struggling with a goal now, the first thing I ask myself is “Tienes ganas?”

Usually the answer is no because if I really wanted the thing, I’d already be looking for solutions and workarounds to make it happen instead of asking myself “Do I really want to do this?”

Yeah, it’s cheesy, but it gets to a kernel of truth. You have to really want something if you want to get it. You have to have ganas.

How Do You Get Ganas?

So what do you do with the knowledge of the centrality of desire to goal-achievement?

Well for one thing, it should be a call to be more discerning in your choice of pursuits.

Sometimes we choose a goal because we like the idea of it. But, we don’t actually like the reality of it. We’re not into the process and practice it involves; we want the end but don’t have desires for the means. Such goals should be abandoned; if you don’t want it, all of it, you will never achieve it.

You have to know yourself, and be self-aware and realistic as to what you really want, and what you just think you want.

This is a truly difficult question to answer.

A lot of goal gurus will tell you that you need to find your “why” for doing something — your deeper, overarching purpose for going after some aim. This can sometimes help. But cognitively locating such, I’ve found, often doesn’t seem to do much. If it isn’t already emotionally, viscerally salient, if it isn’t yet lit up within you, you can’t think it on.

Sometimes an event will trigger a new want, or animate a latent one. You see an embarrassingly unflattering picture of yourself and finally feel motivated to lose weight. You get let go from a job you loved and finally feel the desire to change your work habits. Such events, of course, can rarely be planned, and are hard to willfully desire to happen.

Sometimes, a conversation from the outside aligns with a psychological shift that’s already happening on someone’s inside; when this confluence occurs, it creates a catalyst that can birth a new or stronger desire for something. I don’t think it was my pep talk with Gus that solely changed his desire for flag pulling — we’ve all been on the receiving end of pep talks that left us entirely unmoved. But my pep talk connected with something inside Gus that was already trying to come to life. He needed a nudge, to then flip the switch himself.

This is part of why, as Kyle Eschenroeder argues, when you’re trying to change what you want to want, it’s important to embed yourself in a community that’s pointed in the direction of those desired desires. When you’re surrounded by people who want what you want to want, you’re much more likely to have the kind of conversations that finally flip the switch for you. Being part of a community that embodies certain ideals also shapes what you want more indirectly; observing the examples of others invariably changes your own orientation — that’s the power of mimetic desire.

Yet, while it’s possible to “educate” your desires in this way, to nudge yourself towards wanting something, how desire is ultimately formed and inflamed remains something of a mystery. I’m not sure how it works, exactly, and I’m not sure anyone really does.

But, what I do know, is that if you don’t truly desire something, if you don’t really, really want it, you’ll never get it.