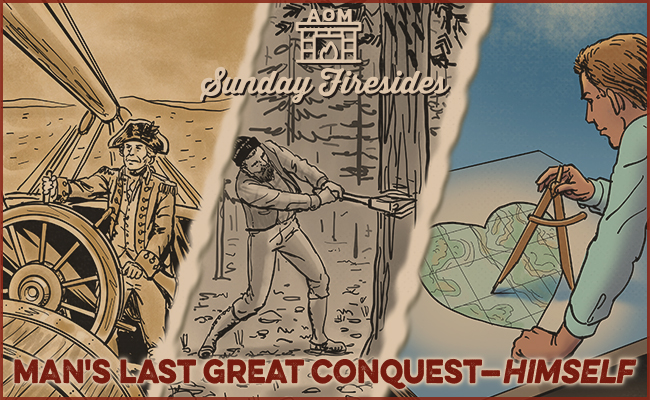 Man has spent thousands of years mapping, domesticating, and harnessing his environment.

He has sailed the earth’s seas, climbed its mountains, plumbed its depths, and left its atmosphere.

He has tamed the wilderness, supplanted thick forests with sprawling cities, cultivated agricultural yields that can feed billions.

He has channeled electricity, routed many diseases, shrunk space and systemized time.

Yet while the resulting rise of civilization solved many of humanity’s most pressing problems, its very fruits have created a new set of them.

Indeed, a question posed by J.B. Nash in the middle of the 20th century remains more open than ever today: Can man live in the world he has created?

Can he avoid the mind-unraveling and body-degenerating effects of physical inactivity by willing himself to move, even when such movement isn’t necessary?

Can he push himself to partake in the life-giving energies of nature and sunlight, when it’s possible to spend all of one’s time within the walls of a fluorescent-lit domicile?

Can he prevent the mismatch between an increased capacity to be bombarded by worry-inducing news, and his static capacity to do anything about it, from becoming a source of crippling anxiety?

Can he find existential meaning when every value is contested and contestable?

Can he live in a world where he enjoys — has become dependent on — corporation-facilitated conveniences, but finds it soul-sucking to work within the structures required to keep them going?

Can man live in the world he has created?

The answer depends on whether he recognizes that though he may have subdued his external obstacles and enemies, he must overcome psychological foes — depression, anomie, angst — which are no less formidable for their ethereality. He must embrace the fact that though this world may be thoroughly charted, explored, and technologized, there remains one last territory to conquer — himself.