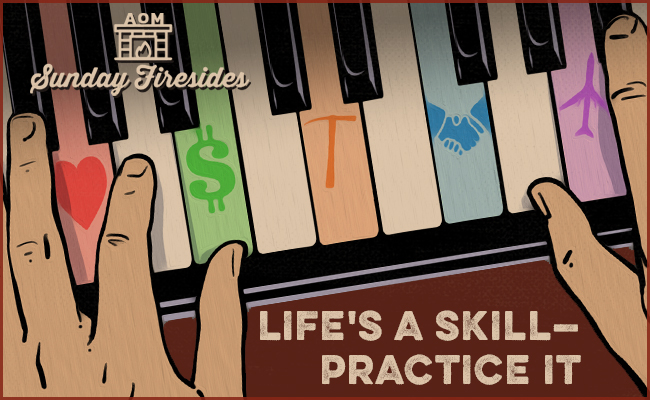 Skills are abilities we can learn and get better at. We tend to think of them in terms of concrete, physical pursuits, which often involve the use of tools or instruments. Shooting a gun. Fixing a car. Playing the piano.

We think of all other traits and activities as things that just sort of are — things we simply are or aren’t good at, or are or aren’t disposed towards.

Yet so much of what we do outside a workshop or studio should rightly be understood as skills as well.

Decision-making is a skill.

Parenting is a skill.

Camping and traveling are skills.

Being thoughtful is a skill. So is being spontaneous.

Listening is a skill, too.

There’s a skill to getting insight. To knowing when you’re right. To admitting that you’re wrong.

Like all skills, these things, and many more, can be developed. Like all skills too, they feel awkward and difficult at first. This isn’t necessarily a sign that you’ll never be good at them, or that they aren’t for you, but simply that you’re still a beginner, with much yet to master.

Life opens up once you realize it’s essentially just a set of train-able, hone-able skills. The more you work at them, the more natural they become; the more your confidence and competence grow, the more you’re able to not only enjoy life, but make the most of it.

We’re all sitting in front of the ivory keys of existence, and the difference between the individual who never moves beyond plinking out the equivalent of “Twinkle, Twinkle, Little Star,” and he who’s ultimately able to play a beautiful concerto, is simply the willingness to engage rather than avoid, learn from mistakes, and practice, practice, practice.