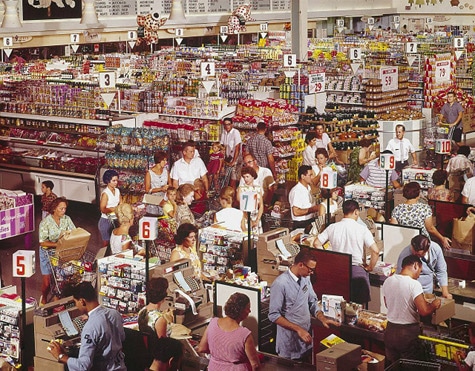 A few weeks ago, we talked about a problem plaguing many men these days, modern neurasthenia, a feeling of anxiousness or restlessness. In this follow-up, we’ll delve deeper into what is causing this restlessness and how it can be cured.

Back in our grandfathers’ day, there weren’t as many choices about what do with one’s life. And in our great-grandfathers time, there were even fewer choices. You might take over the family farm or family business or choose to pursue one of the trades.

And besides the myriad of life choices we must make, we are bombarded each day with the necessity of making an endless stream of little mundane decisions. We stand in the cereal aisle of the grocery store as shelves and shelves of different ways to eat corn and wheat stretch as far as the eye can see in either direction. The web gives us millions of different sites to read. Whereas our grandfathers had 5 channels on the TV to watch, we have 850.

On the face of it, more choices are an unmitigated good thing. Americans especially prize having as many choices as possible. Before the turn of the 19th century, freedom was defined as self-sufficiency, the freedom to own your own land and tools, and eke out a living with your own hands. As consumerism became a dominate force in the culture, freedom was redefined to mean the freedom to choose, to choose between different items and lifestyles, to choose things we believed fit out tastes and personality more than others. This was the beginning of defining ourselves by what we buy, instead of who we are and what we do, but that is another discussion for another day.

Suffice it to say that for the last century our concepts of choice and freedom have been inextricably connected. Smarting from Russia having drawn first blood in the space race by launching Sputnik, Kruschev and Nixon held their famous “Kitchen Debate,” in which Nixon argued for the superiority of the American way of life by pointing to the number and superiority of our goods and appliances-Pepsi and cake mixes, dishwashers and lawnmowers, TV dinners and lipstick.

But is so much choice always the best thing for us? The happiness of Americans has slowly fallen over the past decades and currently 1 out of 10 of us are taking anti-depressants. If more choices equaled more happiness, we’d all be blissed out right now. But we’re not.

Now make no mistake about it-choice is great. It lets us select what we value and express our personalities. Choices give us autonomy and the opportunity to pursue our personal desires and dreams. They allow us to exert control over our lives and avoid feeling helpless. Choices give us the chance to create our own destiny, and they are essential to our psychological well-being.

But there’s a point of diminishing returns, a point where instead of mitigating a sense of helplessness and apathy, they actually increase it. Only 9% of people polled in 1966 agreed with the statement, “I feel left out of things going on around me.” In 1986, 37% of people felt that way. I imagine the number is even higher today. What’s going on?

How Choice Can Be Demotivating

In a high end grocery store, tables offered customers a chance to sample either 24 or 6 different jams. Shoppers were offered a dollar off coupon if they bought a jar. The table with 24 jams attracted a bigger crowd than the 6 jams table, but people ended up tasting about the same number of jams at each. The big difference was in how many of the samplers were converted into customers; only 3% of people at the 24 jams table bought a jar, while 30% of the samplers at the 6 jar table bought a jar.

What’s going on here? Why did increasing the number of choices actually decrease people’s ability to make a decision?

As we’ve said, choices are good, but there’s comes a point of diminishing returns. And that point is reached when the opportunity costs become so great that you cannot enjoy the choice that you make. The accompanying trade-offs haunt you and rob you of taking satisfaction in your chosen course. Or, as happened to the jam samplers, just the idea of making so many trade-offs is enough to dissuade you from making a choice at all. For on the one hand, you miss out on a particular jar of jam, but on the other, you don’t have to think about all the other jams you passed up. You see an attractive choice, but the other choices also have attractive qualities too, which negates the attractiveness of the first choice. That choice no longer seems to be very special and thus ceases to feel worth pursuing.

Now the jam is a trivial matter, but the point carries over to the bigger choices we have to make. There are so many different options that we’re tempted to check-out and not choose anything at all in order to avoid dealing with the opportunity costs of our decisions. We get stuck at the jam table of life, wanting to choose something but unwilling to shut any other choices out, and totally paralyzed by our inertia. And we’re anxious, because other people are coming up and buying the jam and will there even be any jam when we want some? But damnit if we can’t move, and oh no, that person just took some more jam!

The Cycle of Restlessness

Unwilling to deal with potential trade-offs, many men decide the best course is not to choose at all, with the idea that keeping as many options open as possible offers the most freedom and the most happiness. But as intuitive as that might seem, studies show that it just doesn’t work that way. Barry Schwartz, author of The Paradox of Choice, says:

“What could create larger opportunity costs than choosing one mate and losing the chance to enjoy all the attractive features of other potential spouses? People also stay in their jobs less than half as long, on average, as they did a generation ago. Whereas delaying marriage and avoiding commitment to a particular job would seem to promote self-discovery, this freedom and self-exploration seems to leave many people feeling more lost than found.”

Men get caught up in what I will call the cycle of restlessness. Confronted with the numerous choices of life, men feel restless and believe that the cure to the problem is more freedom and choices. Thus they detach themselves from their commitments. But this only creates more choices in their life, which makes them feel more restless and the cycle continues.

Studies have shown that doing things like getting married, being close to one’s family, having good friends, and being involved in religious communities are all correlated with a greater sense of happiness and satisfaction. Now, it’s impossible to say that these commitments caused the happiness, but it’s still interesting to note that these things, which limit some of your choices and freedom, are connected with greater, not lesser happiness.

Think about electricity. It’s a nebulous force that cannot be seen with the human eye. It needs a cord, a conduit for it to be useful and power our lives. Happiness is the same way; without any constraints, any avenues for it to travel to us, it remains a hazy cloud, all around us but frustratingly ungraspable.

While leaving every possible door open in our lives may seem to promise the most happiness, placing some constraints on our choices can actually increase the amount of pleasure and satisfaction in our lives.

But what does this mean? Should we marry the first girl that bats her eyes at us and stay at any job no matter how mind numbing it is?

Of course not. Making commitments willy nilly, simply in the hopes of having less choices, will make you less happy, not more. Rather, it means that we need to redirect the energies we waste flitting from possibility to possibility, into understanding what we really want in life and the trade-offs we are willing to make.

In a time where many things, from our lattes to our RSS feeds, can be exactly tailored to our personal desires, many of us make the subconscious leap to believing that it’s possible for everything in life to exactly align with our tastes. Thus, we add to the bevy of already existing choices, another, albeit false one. We combine all the desirable qualities we can think of into one “perfect” possibility, one that will involve no trade-offs whatsoever, and we then go from college to college, woman to woman, and job to job, searching for this perfect choice to materialize.

The trick to curing your restlessness is to figure out which trade-offs you’re willing to accept and what things you are unwilling to compromise on. You can then greatly narrow the options to pursue. If being the same religion as your future wife is a deal breaker, you’ve just cut out a wide swath of the population. If you also cannot be married to a spendthrift, then more choices can be eliminated. Is having a sense of humor required? Alright, now you have a better idea of who to date and don’t have to pursue every random girl who you think is cute.

Dating 30 women and applying to 15 colleges may seem like the best way to find what’s best for you, but remember, it will backfire in the end. You’ve simply amplified the opportunity costs and set yourself up for regret and “what ifs” when you’re finally forced to make a choice. Define your core values, understand what you really want out of life, and then focus only on the choices that fit those parameters. And if you like Capt’n Crunch, stick with it.

Source: The Paradox of Choice by Barry Schwartz