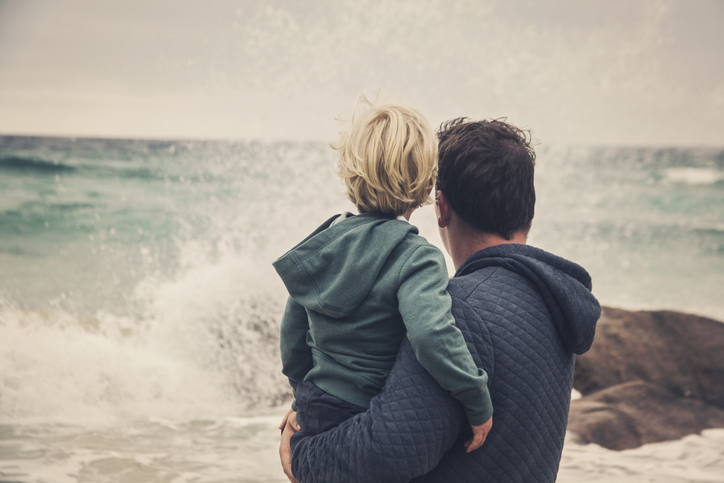 Today, Richard Rohr — a Franciscan friar, author of numerous books on spirituality, and leader of men’s retreats — is fairly well known. But back in early 80s, he was only starting out on his writing career, having just published his first book about the journey of male initiation. It thus came as a great surprise to Fr. Rohr to enter a cathedral in Nuremberg, Germany while on a tour for the book, and find the event had attracted a packed house. Men filled the pews from front to back. Men spilled out into the aisles and the sanctuary.

After giving a talk to the rapt, predominantly male audience, Rohr opened up the floor to questions. A young man stood up and said, “Father, we thank you for coming here today.” Then, extending one of his arms to the right, and the other to left, he said:

As Rohr recounted of this moment during his appearance on the AoM podcast, “you could have heard a pin drop.”

It was then that Rohr fully realized the significance of an issue he has continued to write and speak about in the decades since: the father wound.

What Is the Father Wound?

Some psychologists and spiritual leaders posit that everyone is born with a “father hunger” — a desire to be affirmed, approved, known, understood, and loved by one’s paternal parent, and to grow up with a sense of strength and authority, that, while not overbearing, provides the kind of structure that allows a child to flourish and take flight. When a child doesn’t receive this kind of masculine nurturance — whether because Dad wasn’t around due to divorce, abandonment, or death, or was nominally present, but functionally absent because he prioritized work, greatly favored a sibling, or was outright abusive — this father hunger becomes a father wound.

A father wound creates a sense of lack, an emptiness, that can haunt someone their whole life through, though they don’t always recognize it for what it is, and are unable to give it a name.

While the neglect of a mother can also result in a “mother wound,” in From Wild Man to Wise Man: Reflections on Male Spirituality, Rohr argues that a father’s unique relationship to his children makes his love uniquely prized, and thus creates a uniquely acute swath of damage when that love isn’t given:

Our father, and his response to us, is the first response of an ‘outsider.’ Mom’s love is body-based from the womb and the breast. It is assumed, taken for granted, relied upon instinctively, which is why a foundational ‘mother wound’ can be even more devastating to one’s very core. When one’s good mother dies, it first feels like God has died, because she is your first clear God image and Divine security.

But Dad is that other in the house, at a greater distance. He does not ‘have’ to love you. His love is not inherently felt and drawn upon, like Mother love. He must choose to love you! He decides for you, he picks you out, he notices you among the many. It redeems, liberates, and delights, therefore, in a totally different way. . . . That is the uniquely transformative experience of male love. It validates us and affirms us deeply, precisely because it is not necessary.

The result of not receiving a father’s distinctly chosen affirmation, Rohr argues, “is a deep hurt, a deprivation that leads to a poor sense of one’s own center and boundaries, a mind that is disconnected from one’s body and emotions, a life often with the passivity of a unlit fire.”

Boys and girls alike, he says, need the masculine energy that a father’s love awakens; without it, “They will lack self-confidence and the ability to do, to carry through, to trust themselves — because they were never trusted by him.”

However, this effect is more acute for boys, Rohr argues, as a parent’s lack of nurturance has the biggest effect on the child of the same sex:

It seems we cannot be ourselves, we cannot be our own man, or our own father, until we have been someone else’s little boy. We need him to like us, to bless us even after our mistakes, to enjoy our company, to tell us that we can succeed. The separation from the one who is the same as us (our father) is somehow even more destructive than the separation from the one who is opposite us (our mother). If manhood itself does not like me, then I’m forever insecure about my own. His affirmation is ten times more important than that of any other man, and of a completely different quality than the affirmation of a woman.

How the Father Wound Manifests Itself

When men grow up without a father’s affirmation, they end up seeking it in other ways. In its most extreme and negative form, this can manifest itself in a turn to crime. This was a lesson that was most poignantly driven home to Rohr through a story he was told by a nun who ministered in a male prison in Peru:

She described how, as Mother’s Day was approaching during her first year there, the men in the prison kept asking her for Mother’s Day cards. She kept bringing boxes and boxes of cards for the prisoners to send to mama, but she never seemed to have enough. So as Father’s Day approached, she decided to prepare for the onslaught of requests by buying an entire case of Father’s Day cards. But that case, she told me, is still sitting in her office. Not one man asked her for a Father’s Day card. She couldn’t even give them away.

She realized then — and she told me this story with tears in her eyes — that most of the men were in jail because they had no fathers. Not that they were orphans, but they had never been fathered. They had never seen themselves as sons of men who admired them, they had never felt a deep secure identity, they had never received that primal enthusiasm that comes from growing up in immediate contact with an older and secure man. And so they spent their lives trying to become men in devious and destructive ways. They were insecure men who had to prove that they were men, because no one ever told them that they were. Their negative acting out invariably became acts of lawlessness, opposition, and violence.

The efforts of men who carry a father wound to prove themselves as men can also manifest in more socially sanctioned ways — in the pursuit of physical fitness, sexual conquests, wealth, and professional status. These men are driven not only to prove that they’ve made it as men, but in a subconscious desire for their father to notice them, to pat them on the back. In a sense, they are ever saying, “Daddy! Daddy! Look at me!”

Having this kind of chip on one’s shoulder is not always a negative thing; the drive it lends can be harnessed as an animating force towards good goals. Winston Churchill’s entire career, for example, can arguably be traced back to the fact that he never felt affirmed by a father who ignored and harshly criticized his son by turns; even long after his father died when Winston was but 21 years old, a deep craving for paternal approval and admiration drove him to attain the heights of power, and the world is better off for it.

But this shoulder chip can also send men into an endless, fruitless cycle of seeking worldly success. A hole created from a lack of love cannot ever be filled with money, fame, or status, and when a man’s accomplishments don’t leave him feeling any more satisfied, he just tries harder, which only deepens his feelings of emptiness and despondency. A man’s relentless pursuit of outward achievement can lead to the ruining of those other aspects of his life, which, if they do not heal the father wound completely, go farthest in nurturing his soul, including, ironically, the ability to be a good father to his own children.

Searching for a Daddy

Rohr says that in the absence of the affirmation of one’s dad, “every male relationship will somehow be our unmet father, for good and ill.”

Another of the ways that a father wound manifests itself, is the transference of a man’s father hunger onto other men. Wounded men look for paternal approval and nurturance in friends, coaches, teachers, bosses, and pastors. This yearning for mentorship isn’t itself a bad thing; indeed, even boys who have healthy relationships with their fathers need other role models for manhood too.

But the intensity of a yearning to be fathered can lead to the formation of attachments which are unhealthy. A young man joins a gang to find the approval he craves, even though, as Rohr points out, it’s “an exercise in futility, seventeen-year-old boys trying to get father energy from other seventeen-year-old boys.” An employee becomes a “yes man,” willing to do whatever is needed to please his boss. A young man becomes vulnerable to the manipulations of a minister, who offers him fatherly love . . . mixed with abuse.

Men with a father wound also lend public figures excessive devotion. They look to social media personalities to get their marching orders, sometimes calling them “uncle,” to disguise the paternal affirmation they’re really after. They look to politicians as more than elected representatives, but as father figures. Hence the particular appeal of strong man leaders, who really serve as substitute daddies, figures who offer a sense of paternal authority, strength, and security, who promise to restore to a man the kind of respect he grew up without. Men pledge the kind of all-in adoration and unthinking allegiance to such leaders that no politician deserves. These devotees, Rohr observes, “will do almost anything for the assurance and comfort that ‘Daddy’s’ approval gives them.”

Such a wound can only be truly filled with the love of one’s own father. Nothing else will fix it, and that fact has to be accepted. It is often said that time heals all wounds, but that’s not really true. Wounds simply become less raw, less gaping; they close over, but the scar remains. The hard reality is that a father wound is like a limp, a permanent disability. But, it can be recognized, dealt with, and mitigated, so that it affects a man minimally and is almost unnoticeable in his stride. This mitigation process is achieved through finding mentors and role models, guides which give a man back as much “mobility” as possible.

And yet, investing too much into such father figures can be detrimental. The mentoring one seeks cannot be too overweening, too desperate, too freighted with expectations that cannot be fulfilled and will only lead to disappointment, and worse.

As Rohr remembers of his lecture at the Nuremberg cathedral, the same young man who initially stood up to explain that the church was so crowded because Germany was populated by men orphaned by war, added another observation to his remarks: “We needed a father so bad that we chose a bad father.” “And of course,” Rohr says, “everybody knew [who] he was talking about.”

Be sure to also listen to our podcast with Fr. Rohr: