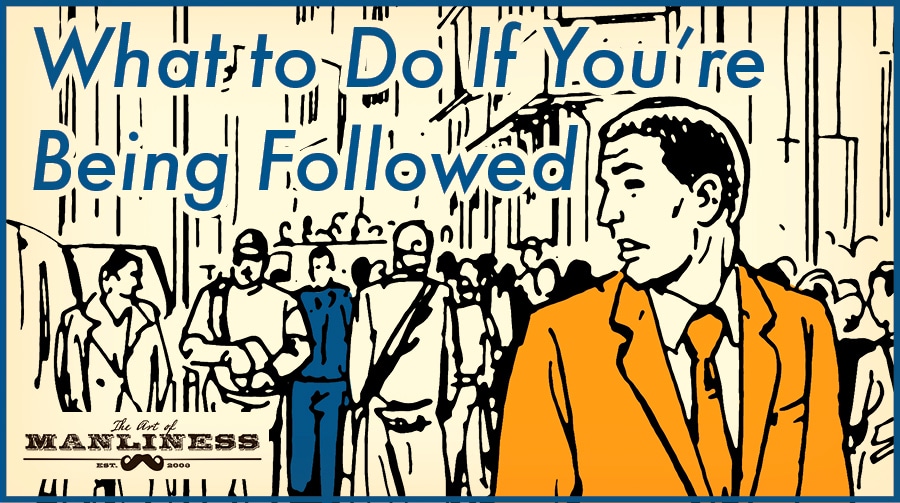 With our archives now 3,500+ articles deep, we’ve decided to republish a classic piece each Friday to help our newer readers discover some of the best, evergreen gems from the past. This article was originally published in October 2017.

You arrive at your favorite coffee shop in the ‘burbs and notice a guy in a green baseball cap standing behind you. You give him a friendly nod and go back to looking at the menu.

While you’re taking a bite from your Arby’s roast beef sandwich during your lunch break downtown, you notice that same guy in the green ball cap at a table outside. “Huh. Small world. What a coincidence,” you think to yourself.

Work is over, and you roll up to the gym to get your sweat on. While you’re walking to the entrance, you glance over and see Mr. Green Baseball Hat sitting in a car in the parking lot.

You get the sinking feeling that this third spotting isn’t a coincidence and that maybe this guy is following you.

Unless you’re a criminal or suspect in some crime, you probably think you don’t have to worry about being followed.

But even if you’re a law-abiding citizen, there’s a chance you could be followed at some point in your life by people who’d like to do you harm: an angry employee that you had to fire; a crazy ex; friends and family of said crazy ex; an unstable person you unintentionally offended at church; a weirdo you met once at a party who is now obsessed with you; the guy you accidentally cut off in traffic three miles back; a thief who’s decided you’re a good mark. The list goes on.

There’s also a chance you might be followed by a private investigator due to a divorce, custody battle, or other litigation you’re involved in. If that’s the case, you want to provide as little information to the PI as possible to avoid inadvertently giving your legal opponent fodder that somehow helps their case.

The chances of these kinds of people following you are slim. But if you do find yourself in this situation, it’s good to have a plan on what to do.

An Ounce of Prevention Is Worth a Pound of Cure: How to Be Less Followable

If you don’t want someone following you, the best thing to do is to make yourself less “followable” in the first place. Stalkers, PIs, or people who want to do you harm count on the fact that you have a set routine that they can easily follow along with. You subtract that advantage, and make yourself less of an easy target, by making your schedule less predictable. If you can, mix up how you get to work throughout the week. Don’t go to the same places on the same days and at the same times.

Also, don’t broadcast your whereabouts on social media. Turn off location services that indicate where you’re posting from. Would-be stalkers will check this info so they can pinpoint your movements.

How Do You Know If Someone is Following You?

You’d be surprised how easy it is to tail someone without them knowing, as most people aren’t paying attention to their surroundings. So the first step to figuring out if you’re being followed is to start keying in on what’s going on around you. Maintain situational awareness while you’re out and about and establish baselines. What’s normal for the situation or environment you’re in?

Once you’ve established baselines, pay attention to possible anomalies. Is someone looking at you more than is normal and making an unusual amount of eye contact? Does a car you don’t recognize keep driving by your house? Has someone been showing up to your favorite coffee shop who doesn’t fit the typical crowd? These are anomalies and should put you on the alert that someone might be following you.

One anomaly to register is seeing the same person, in three different places. Ex-CIA officer Jason Hanson gives this rule of thumb used in the intelligence community:

In addition to noting anomalies, pay attention to your gut feelings. You’ll often intuitively know when something is wrong.

Then, if you experience those uncomfortable feelings, try to confirm them. How you do so will differ as to whether you’re in a car or on foot.

If you suspect someone is tailing you in a car, you can confirm it by doing the following: 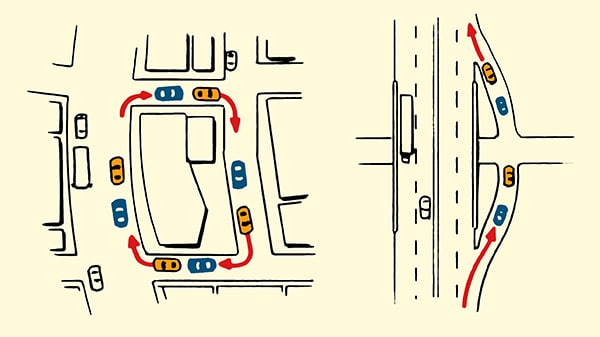 1. If you’re on city streets, make four right turns. If the car is still behind you after the fourth turn, they’re probably following you. Most people don’t travel in circles around city blocks.

You can also get over to the right lane of the highway, and slow down to 15 miles or so below the speed limit. All the cars behind you will soon pass by. If the one you’ve had your eye on doesn’t, it’s almost assuredly following you. 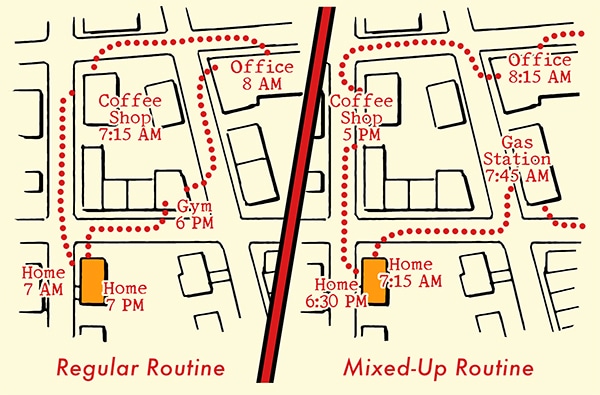 So if you suspect someone has been following you, you can further confirm it by mixing up your routine. Instead of going to the coffee shop at 7 AM like you usually do, go to a convenience store. If you see your potential pursuant at the convenience store too, there’s a good chance they’re following you. You can increase your certainty of being followed by going to different places at different times. If you see the same person no matter the time and no matter the place, you can be pretty sure they’re following you.

3. Pause and turn. Hanson suggests this effective tactic for determining if someone is following you:

While you are walking, simply pause, turn around, and pretend to do something — like check your phone, tie a shoe, or turn around as if you were looking for someone. Then look directly at the person you think is following you. Your typical amateur who is following you is going to get flustered and give herself away. She’s likely to freeze or act unnatural because you have caught her by surprise. In other words, someone who is following you will not exhibit the same natural behavior as someone who is simply walking down the street.

4. Change direction. As you’re walking, stop and turn around 180 degrees and start walking towards the person you suspect is following you (only do this in a public and crowded space). If your suspected stalker also flips around and starts walking behind you again, you can confirm that you’re being tailed.

What to Do If Someone Is Following You

So you’ve confirmed that you’re being followed. Now what? If possible, you want to avoid a confrontation, which all self-defense experts agree is better than needlessly getting into a violent encounter.

To do this, follow these two general rules, as well as guidelines that pertain specifically to whether you’re driving or on foot.

Rule #1: Don’t go home. Whether you’re walking or driving, don’t go to your house. It’s natural to want to get home and lock the doors, but if your tail doesn’t know where you live, you don’t want to reveal that information by taking him there.

Rule #2: Stay in public, well-lit, and well-populated areas. Don’t go anywhere that will put you by yourself with your pursuant. If you’re in your car, stay on main roads that are well-lit and don’t go down country roads or secluded streets. If you’re on foot, stay in public areas where there are lots of people. You don’t want to go down isolated alleyways where you can be cornered. If someone seems to be following you in a store, you also don’t want to go out to your car; the stalker could ambush you in the parking lot or follow you home.

Gather info. If you’ve confirmed you’re being followed in your car, start getting information on the tailing vehicle to potentially look into yourself or pass along to the police. Get the vehicle’s make and model. And if you can score the license plate number, even better.

Call the police. If you feel threatened, call the police to let them know what’s going on. Or simply drive to your local police precinct, and tell them you believe you’re being followed. Give an officer the information on the car that’s following you and let them take it from there. 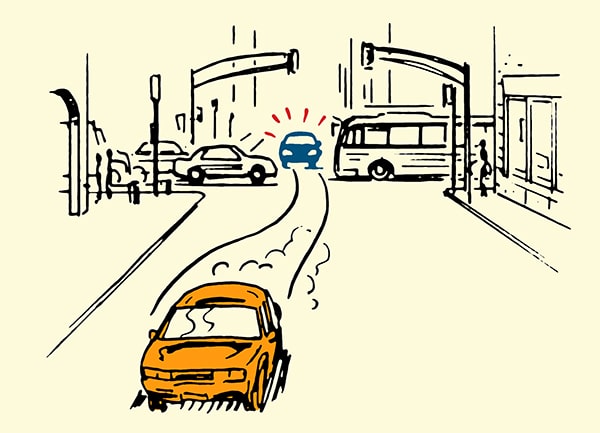 Use well-trafficked roads with lots of stoplights and stop signs. Your pursuant might get stuck at a light or behind more traffic, giving you the chance to shake him off.

Only return home once you feel sure you’re no longer being followed by your tail.

Call the police. If you believe you’re being followed on foot by someone with ill intentions, call the police and give them a description of your pursuant. Keep the police on the phone for as long as possible. If your pursuant is nearby, talk loudly so he or she can hear what you’re saying. If there’s a police precinct nearby, go to it. 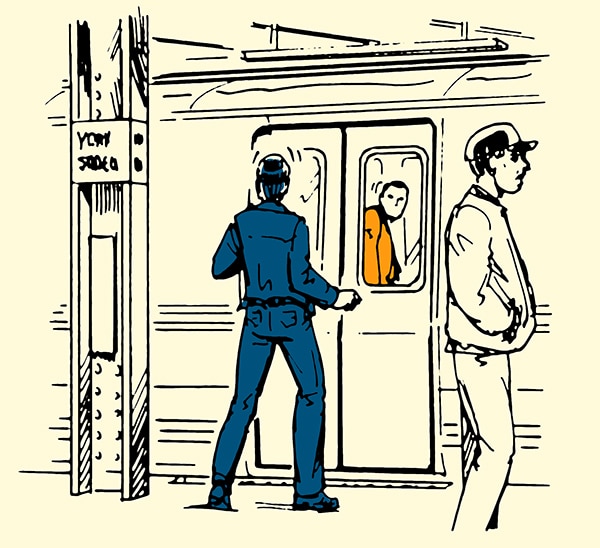 Acknowledge your follower. One tactic Hanson recommends using in public areas is to simply let your follower know that you know they’re following you. Turn around and look right at them. If you’re feeling brave, ask “Can I help you?” Or “What do you want?”

Most bad guys are criminals of opportunity. They’ll only go after you if they think you’re a “soft target” — that they have some sort of tactical advantage over you. Following you without you knowing is one such advantage. By acknowledging their presence, you take it away. Once they realize you’re alert to their tail and they’ve been spotted, they’ll often get flustered and immediately disengage. You’d be surprised how often a show of assertiveness will cause a would-be criminal to back down (at least if their behavior is of the social aggression rather than asocial type; if the latter, you should be prepared to fight back).

Again, you generally only want to use this tactic if you’re in a well-lit and well-populated area, in case the stalker advances instead of retreats. You want witnesses.

But What If I’m On the Lam, Jason Bourne Style?

If for some reason you find yourself in an international, high-stakes espionage manhunt like Jason Bourne, the tactics above aren’t going to work. In fact, you’re pretty much hosed. First, it’s going to be very difficult to even determine that you’re being followed. Highly skilled, professional trackers will use teams of people to co-ordinate surveillance on you. Instead of a single person following you everywhere you go, they’ll throw you off by having one person follow you in one area and another person follow you when you arrive somewhere else. They can even swap those people out to avoid you getting suspicious.

Even if you do figure out you’re being followed, because professional investigators work as a team, it’s hard to shake them. You might be able to delay their finding you, but they’ll almost assuredly get you in the end.

Long story short: try not to get into a Jason Bourne-style manhunt.

But if you’re being pursued by a more garden-variety stalker, the tips above will help.