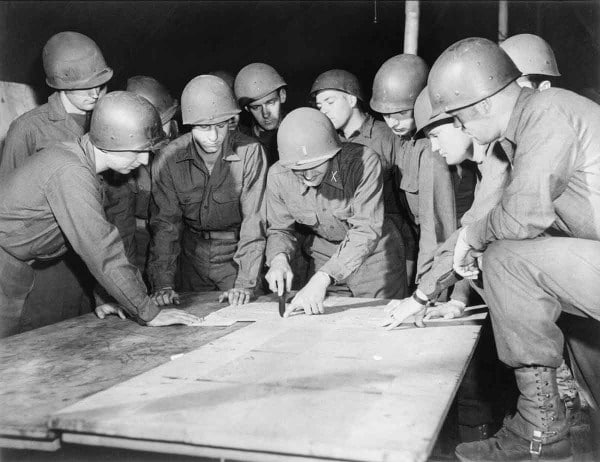 Editor’s note: The following is an excerpt from FM 22-5, an Army field manual on leadership published in 1946. Its contents were formulated during WWII and codified the year after the war ended. The principles outlined are directed at military officers, but apply equally well to leaders in every area of life. 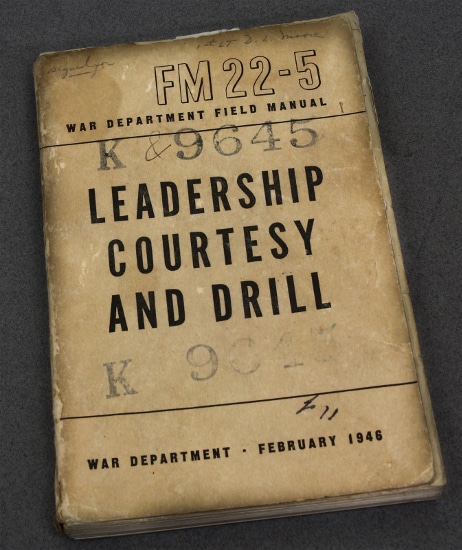 Section II. QUALITIES OF THE LEADER

A leader is self-confident and commands his subordinates. He is not arrogant, nor does he look down upon subordinates as inferiors lacking in intelligence, in self-respect, or in the desire to do their share. The leader must possess the soldierly qualities of obedience, loyalty, neatness, precision, self-control, endurance, courage, and coolness in the face of danger in a sufficiently high degree to be a fitting example to his men. Mutual respect and loyalty are essential in a team.

Successful practical experience gives the leader confidence in himself and inspires it in his men. Intelligence and knowledge derived from the experience of others may serve as substitutes initially, but handling men is an art developed through experience. It is the duty of all leaders to afford their subordinates opportunities to practice leadership, and to encourage subordinate leaders to solve their own problems by giving them maximum responsibility for their units, subject only to necessary supervision. Inexperienced leaders may ask the advice of their superiors, experienced subordinates, and other experienced leaders, but they should not depend on others to make their decisions for them. The decisions and the responsibility should be theirs alone.

a. The leader should adopt a sensible and natural attitude in dealing with his subordinates. It is always a grave mistake for a leader to try to gain popularity by undue familiarity, coddling, or currying favor, because it is an inescapable fact that intimate association between leaders and those they lead tends to destroy discipline and lower prestige. In the interests of good discipline, officers are required to wear a distinctive uniform, to live apart from the men, and to confine their social contacts in the Army to other officers. This age-old distinction prevails in all armies. Enlisted men understand and appreciate the reasons and necessities which prevent undue familiarity with their leaders and have little but contempt for the officer or soldier who, forgetting his own place, deliberately crosses the dividing line reserved for the other. The wise leader will walk the thin line between friendship and familiarity, and at the same time be parent, brother, and father-confessor to his men. It has been said that “a good leader has the patience of Job, the loyalty of Jonathan, and Martha’s willingness to serve.” However, this is never a one-sided relationship, because experience has shown that if the leader will take care of his men, they’ll take care of him.

b. It is important that a commander keep himself accessible at all times to the men of his unit. Thoughtful consideration must be given to complaints. The man who makes a complaint thinks he has suffered an injustice. If he has, the fault should be remedied; if not, his faulty impressions should be corrected at once. In this way no grievances, real or imaginary, will be allowed to develop.

a. The unexpected is always a test of leadership. The ability to grasp the facts in a situation quickly and to initiate prompt intelligent action is invaluable. A clear understanding of the objective to be attained will usually guide a leader to a sound decision.

b. Decisiveness is of great importance. Indecision, or hasty decisions which must be changed, destroy confidence. Stubborn adherence to faulty decisions creates resentment, while frank admission of error with prompt corrective action inspires respect and confidence.

c. In some situations, action may be necessary which is beyond the scope of the leader’s authority or contrary to his orders. In such circumstances, he reports the situation to his superior with his recommendations, or, when the urgency warrants it, takes action himself and reports his actions to his superior as soon as possible. Soldiers unite quickly behind a leader who meets a new and unexpected situation with prompt action.

d. New situations and absence of means due to enemy action or other cause demand resourcefulness in a leader. Military supply, organization, and training are designed to meet all normally expected situations, but sometimes fail under combat conditions. Inactivity or passive acceptance of an unsatisfactory situation because of lack of normal means or ways of dealing with it are never justified.

Thoughtfulness includes the forethought essential to planning and such qualities in relations with others as courtesy, consideration, sympathy, and understanding.

a. Proper planning is essential to the success of any mission, whether in training or in combat. The welfare of the men is an important element in all plans, second only to the accomplishment of the mission.

b. Courtesy is discussed in chapter 3.

c. A leader’s consideration for his men, like the spirit of obedience, is ever present. It reveals itself in many little ways, such as letting them be at ease during explanations at drill, insuring that they get hot meals on marches or in combat, taking advantage of lulls to let them rest or sleep, commending work well done, and understanding and discussing with them their points of view and their individual problems.

d. Sympathy should be intelligent. It should not encourage men to shirk, feel sorry for themselves, or rebel. It should not produce that familiarity which breeds contempt or lack of respect. It should not blind the leader or his men to the realization that orders must be obeyed even when the reasons for them are not understood, that hardships are to be expected and must be endured, and that the impossible may have to be attempted and achieved.

a. Everyone resents injustice and favoritism. In assigning duties, recognizing merit, granting privileges, or awarding punishment, the leader must be just and impartial. He must be accessible, willing to listen to and investigate complaints, and prompt in taking corrective action when necessary.

b. Commendation is more effective than criticism, but indiscriminate praise reduces the value of commendation, and failure to point out faults is unjust. An incompetent subordinate should be removed, but the leader should not condemn him until he has pointed out his errors to him and given him a chance to correct them, unless it is clearly obvious that to do otherwise would threaten the success of a unit’s mission.

c. To accept slipshod performance as satisfactory is to court disaster in battle. Likewise, to accept willing, competent performance without recognizing it with commendation or other reward is a serious neglect that ultimately produces discouragement and destroys that willingness which is an essential element of obedience.

a. There are other positive qualities which create respect. These are honesty, truthfulness, decency, dependability, and sincerity. Possession of these create self-reliance and engender self-respect. Many attributes, such as sincerity, enthusiasm, friendliness, and good humor, are invaluable to a leader; these should be natural and not forced or exaggerated. If not inherent, they can be acquired over a period of time by observation of others and thoughtful application of the results of this observation to one’s needs.

b. Dissolute habits must be avoided and undesirable traits of character must be corrected. Immorality, obscenity, drunkenness, gambling, and continued indebtedness undermine moral fiber and destroy the will as well as being outward indications of self-degradation. Ridicule, sarcasm, and insulting remarks create resentment and should never be employed. Surliness and uncontrolled anger indicate lack of poise and self-control, often concealing inability and lack of knowledge.

Section III. RESPONSIBILITIES OF THE LEADER

The manner in which a leader fulfills his responsibilities is the measure of his success. These responsibilities are twofold, comprising the accomplishment of his mission and his duty to his men.

a. The primary responsibility of a leader is the accomplishment of the mission which is assigned him by his superiors. Everything else in the military service, even the welfare of the men, is subordinate to it.

b. No individual is fully prepared to undertake his assigned duties until he understands the mission and the part he is to play in accomplishing it. To provide this orientation is a constantly recurring obligation to all leaders in every stage of training and combat.

c. When things go wrong in his unit, the leader is loyal to his men and accepts full responsibility without attempting to evade it through excusing himself or blaming a subordinate. Likewise, when transmitting orders from his superiors, the leader is loyal to them and does not curry favor with his men by indicating that he is issuing the orders against his will. If he is the real leader of his unit, the orders he issues, no matter where they originated, become his orders to be enforced with all the authority he can exert.

d. A superior should demand this sense of responsibility in subordinate commanders and leaders and should encourage it whenever possible by exercising his authority through them and refraining from intervening openly in the exercise of their authority, or doing anything to discredit them in the eyes of their men.

e. Responsibility for his organization requires that the leader constantly check to see that his orders are carried out and, where necessary, that corrections are made at once. Every individual should be trained and encouraged to avoid the inertia which leads to an assumption that orders have been properly executed.

a. It is preferable that training be conducted by the leader who is going to lead the team in combat.

b. For economy in time, and in the absence of experienced leaders, competent specialists may be used as instructors. In such cases, the leader acts as an assistant instructor and leader in the applicatory phases of such training. He prepares himself by study and application. He does not bluff or try to evade legitimate questions. He may not know all the answers, but he should be able to get them for his men.

c. Since training is preparation for battle, it must be realistic, practical, and as similar as possible to the battle situations the personnel are expected to meet. It must be sufficiently arduous to develop the necessary qualities of stamina and obedience under adverse conditions.

a. Success in combat depends primarily upon the actions of individuals and small unit leaders, once they have been committed to action. It is then that training, good discipline, and high morale pay dividends, and leadership proves its worth.

b. The leader gives his team its mission and a simple plan for achieving it. He places himself where he can control the team as a whole or that part of it which is making the principle effort. He requests necessary support and keeps his superior, and leaders of those units adjacent to his, informed of the situation. As new situations develop, he initiates action to handle them.

c. Although he does not expose himself needlessly, thoughts of his own safety are subordinated to concern for his mission and his men. His presence and the force of his personality and example should assure the successful accomplishment of the mission.

d. After combat, the leader concerns himself with the reorganization of his team and the application in training of lessons learned in combat. He insures the care of the wounded, takes care of the effects of those who have been killed, sees that merit is recognized and rewarded, devises activity to maintain morale, and in other thoughtful ways shows his appreciation of loyal service and insures that the team is ready for continued duty.

Podcast #659: Do You Want to Be Rich or Wealthy? (And Why the Difference Matters)

Podcast #743: How to Get Time, Priorities, and Energy Working in Your Favor