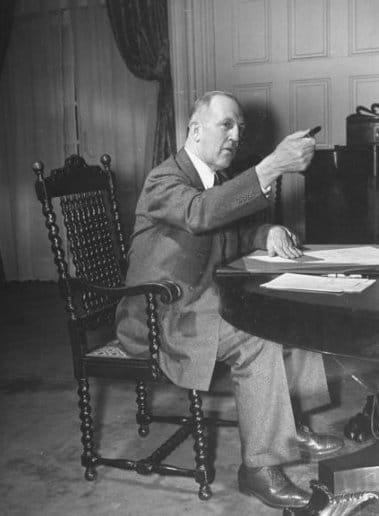 “President Wilson did not have a well-organized secretarial staff. He did far too much of the work himself, studying until late at night papers and documents that he should have largely delegated to some discreet aides. He was, by all odds, the hardest worked man at the Conference; but the failure to delegate more of his work was not due to any inherent distrust he had of men—and certainly not any desire to “run the whole show” himself—but simply to his lack of facility in knowing how to delegate work on a large scale. In execution, we all have a blind spot in some part of our eye. President Wilson’s was in his inability to use men.” Woodrow Wilson as I Know Him, Joseph Patrick Tumulty, 1921

“Mr. Garvin wanted Lloyd George back as Prime Minister. ‘He’s an old man,’ said 72-year-old Mr. Garvin, ‘but he’s a genius.’ And genius is like radium-it is radium always, no matter how little there is of it left…Perhaps Lloyd George can work only six hours a day, but six hours of Lloyd George is worth days of anyone else’s month. In the last war Lloyd George knew had to delegate authority. He cared nothing for the political convictions of the men to whom he delegated it, only how they did their war job. That is what Chamberlain cannot do: delegate authority to able captains.” Life Magazine, 1940

When we think of manly leadership, thoughts of courage, resiliency, boldness and determination come to mind. We think of the man confidently in charge, steering the ship and leading the men.

What we often do not think of is delegation. The ability to wisely and effectively delegate is a quality far more quiet than others, and yet one of the most crucial to a leader’s success. Whether you’re a manager at work, owner of your own business, officer in the military, or simply working on a school project, effective delegation is one of the keys to achieving your goals.

A man who insists on maintaining all control and authority is insecure and actually fails to even meet the definition of a leader. A leader is an executive, a man who manages time, resources, and people. A leader does not do everything himself, rather he marshals all of these elements on the pathway to success.

Why Is Delegating Important?

Delegating frees you up to tackle the truly important aspects of your mission/business/project. Too many leaders, believing only they are able to do things just right, insist on being involved in every single detail of their missions. They believe that this ultra-hands-on approach is good for business because they’re making sure everything gets done just so.

But a leader should be in charge of the overall direction of a team; he is the one looking ahead, steering the course, and making needed corrections to avoid getting off track. But buried in the small details, a man will lose the big picture and fail to see that the mission is falling apart until it is too late.

A good leader isn’t a slave to detail; he uses his valuable time to tackle what’s truly important. And this leads to greater success for him and his organization.

Delegating increases the morale, confidence, and productivity of subordinates. A boss that takes over his subordinates’ responsibilities, constantly looks over their shoulder, and sticks his nose in their every doing, creates very dissatisfied people. They feel like their leader has no confidence in them. Conversely, bosses that give important responsibilities to their employees, along with the freedom to complete the task their way, builds his employees’ innovation, morale, and satisfaction. It is crucial for a leader to show those under him that he trusts them.

“There are those who seem to think a proof of executive ability is to be fussing around all the while. Not so. The real leader flutters not. He knows how to delegate work. He is the one who directs and, therefore, seems least busy of all.” Ohio Education Monthly, 1915

Delegating saves you time. Not only does delegating allow you to concentrate on more important matters, it simply gives you more time in general.

Some leaders don’t believe this. “Why bother spending all that time training someone to do something that I can do myself with less trouble?” they ask. But while it’s true that training someone will involve more time in the short term, it’s an investment in the future that will pay compound interest.

The old adage, “Feed a man a fish, feed him for the day, teach a man to fish, feed him for a lifetime,” applies here. You can spend 20 minutes every day doing something your secretary should be doing, and thus spend 86 hours doing that task during the next five years. Or, you can spend 3 hours one day training your secretary to do it, and not have to spend any time on it ever again.

And what’s the point of working your butt off to get to the top if you’re going to be just as busy and harried as you were as a grunt?

Andrew Carnegie was a man who knew how to hustle to get wanted he wanted. But once he found success, he became a master delegator. To a friend who told him that he got to work at 7 in the morning, he said:

“You must be a lazy man if it takes you ten hours to do a day’s work. What I do is get good men and I never give them orders. My directions do not go beyond suggestions. Here in the morning I get reports from them. Within an hour I have disposed of everything, sent out all my suggestions, the day’s work done, and I am ready to go out and enjoy myself.”

How to Delegate Effectively

“Analyze the career of the successful business manager and you will find that he has done two things: by elimination and selection he has fitted competent men to the places at which the work focuses; by system he has so shifted detail to the shoulders of subordinates as still to keep the essential facts under his own hand.” -William A. Field of the Illinois Steel Company, 1919

Pick the best people. The true key to effective delegation begins before you actually do any delegating at all; rather, it starts in the hiring office. Choosing the best people for your team or business is the most paramount part of effective delegation. Everything rests on having people that can successfully carry out the responsibilities you delegate just as well as could do yourself. Pick people who are creative and self-motivated enough to work without you constantly looking over their shoulder and giving instruction.

Delegate in a way that people will willingly accept the assignment. When you delegate a task to someone, that person will greet the task with one of two responses: resentment or pride. To ensure it’s the latter, never delegate responsibilities that everyone knows you should specifically be doing. You delegate tasks when there are more important things that you personally need to attend to, not when you simply find a task unpleasant. My personal rule is never to delegate things that I wouldn’t be willing to do myself if I could.

When you delegate a task, tell the person why you chose them-why you think their particular talents are well-suited for the project. Compliments go a long way, and will give the person a sense of being needed and a sense of purpose.

Also, don’t play favorites when delegating responsibilities-doling out tasks based not on talent but on who you like. Not only will this create resentment among your team members, not picking the best person for the job simply handicaps your project before it even begins.

Have consistent standards. Leaders who complain that their subordinates don’t have the ability to tackle responsibilities competently are sometimes to blame themselves. They have not given their people clear guidance on what is expected of them. These leaders do not know themselves what they want and yet are angry when the result of a subordinate’s work is not up to par. They know what they don’t like, but can’t articulate what they do want. Developing Executive Ability, a book from 1919, sums this point up well and adds other invaluable advice:

“Let us analyze this complaint which has been voiced in one form or another by many executives—the detailed and reiterated directions these secretaries require, their lack of insight into the day’s work. It is granted that no brief could be maintained for all private secretaries; their ranks have been invaded by the incompetent and all are human. But as a rule the failure to get things done as the executive wants them is because he does not know himself what he wants, consistently. It is the lack of system, of standards, which is really to blame for the tangle, since the whim of the moment, and not a clear-cut standard, determines whether the typing or the choice of letterhead is to please him.

A man’s efficiency is best developed by giving him responsibility with a clear understanding of that which is expected. Gradually increase the responsibility, always extending a guiding and helpful hand where needed. Give him all information necessary bearing on his work, encourage him to discuss troublesome matters with you or his next superior in order that errors may not occur for fear of exposing an apparent lack of knowledge. Remarkable results along this line can thus be obtained. We, as individuals, have but a slight idea of our capacity, and we realize possibilities only as we are put to the test. No greater encouragement can be given. It assumes a confidence that is appreciated. A man will strive his utmost before admitting failure. Responsibility causes a man to plan and think. When he begins to think, he at once becomes valuable; he feels he is a part of the company and that its interests are his interests. New possibilities that had been lying dormant are realized. New thoughts are aroused in rapid succession. The new opportunities act as a stimulant toward accomplishment.”

Give ample freedom for the subordinate to complete the task. Once you delegate a responsibility, you are placing your trust in that subordinate to carry out the task. Constantly jumping back in to check on how things are going will show your subordinate that you do not really trust them, and thus will actually erode their morale and impede their productivity, creativity and success. Give the person room to be able to successfully complete their assignment, and remember, while there is an agreed upon goal, they don’t have to get there exactly how you would get there. Let them do things in their own way.

Follow-up. Giving ample freedom doesn’t mean you never check in at all. Periodically follow-up with the person, not necessarily to stick your nose in what they’re doing, but to see if they have any questions or concerns that need to be addressed.

Share in rewards and give credit and praise. When you ask others to take on responsibilities, you cannot ask them only to share in the risk and drudgery, and not the rewards and glory. When a project is a success, a leader gives credit where credit is due. And he treats his subordinates as true partners, listening to their feedback and respecting their ideas and opinions. A great leader understands that the man on the ground often has the best insights to offer on what is really going on and needs to be done.