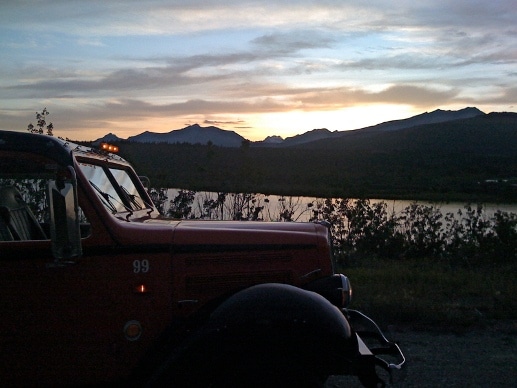 If you’ve been watching Ken Burn’s new documentary about the history of our National Park system, you’ll probably be envious of this week’s job. Matthew Nagy spends his summers driving a 1937 convertible bus around Glacier National Park in Montana in his position as a “red bus jammer.” The guys who drive these buses as tour guides are referred to as “jammers” because until 1989 all of the buses had un-synchronized manual transmissions, meaning the drivers had to double-clutch up and down the hill. This apparently made a lot of noise, so they started calling the drivers Gearjammers as a result. And that name was then shortened to just “jammer.” Whatever you call the job, it’s a dang cool one.

My name is Matt, and I am 24 years old. I graduated from the University of South Carolina in 2008 with a degree in Tourism Management. This is my first season working as a Jammer up at Glacier National Park, and I enjoy every minute of it. My job basically entails driving a 1937 White Motor Co. convertible bus around one of the best parks in the country. I provide commentary about the history of the park, geology, as well as interesting anecdotes related to the park and the surrounding areas to my guests as we ride along the “Going-To-The-Sun Road.”

2. Why did you want to be a red bus jammer at Glacier National Park?

After a few months testing out a poor job market in New York City after graduation, I ended up back at home working at a grocery store just for some income. Spending a cold and miserable winter in Pennsylvania, the concept of driving around in a cool old bus with sunglasses on and the top down sounded highly appealing – so I took a shot and applied for a job. I grew up in a car, taking long road trips up and down the East Coast and also in California, so lots of seat time was natural to me.  Now I drive between 1000 and 1400 miles a week.

Getting this job was a matter of pure chance, really. After college, a close friend of mine moved to Missoula, MT and began to work out there for a while, hiking and kayaking and enjoying the outdoors. He mentioned what a great area Glacier was and how it would be great to work up here for a summer. So with a few clicks of the mouse I was looking up jobs and stumbled across the tour driver position.  I was fortunate that a few drivers were unable to come out this season to work, and after a few back and fourth phone calls with the transportation manager the job was mine, and I was on my way to Montana. 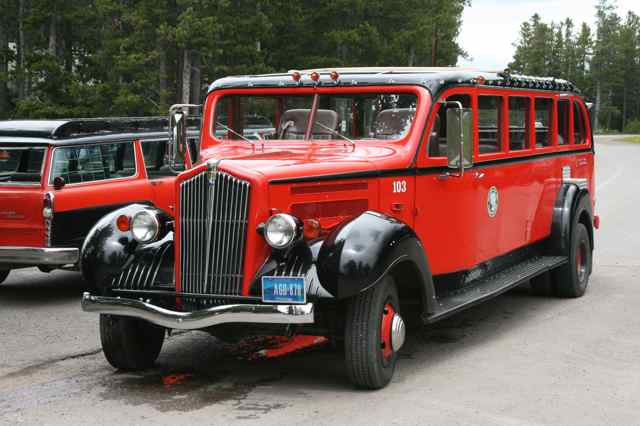 This is Matt’s ride.

4. How competitive is it to get a job as a jammer?

It can be fairly difficult to get a job as a jammer because there are so many returning drivers each year who come back season after season. We have folks here who have been driving for up to 20 seasons, as well as a lot of drivers who drove once when they were young and then came back at retirement age. It is an interesting dynamic, with all the different ages and experience combined with all of the drivers, and we end up with quite a fraternal spirit after training, driving, and living together for such long periods of time. Being up here at times is like summer camp for adults.

5. Being a red bus jammer is a seasonal position. What do you do during the rest of the year?

During the rest of the year I work as a winemaker for the vintages in the Northern and Southern Hemispheres. I will work this northern vintage in Long Island, NY until December, take a month or so off and then head to Australia to work the southern vintage. Then it will be back up here to Glacier to celebrate the park’s 100th birthday driving red bus #99.

The best part of the job is being able to be out in the park every day and see the amazing scenery that is contained in it. When there is a good group of guests and it is a beautiful day outside, the job is unmatched. It is a lot of fun to show people around this unique park and all the wonder that is around us every day. Just about every day that I am out and working I still have at least one “wow” moment where I cannot believe how fortunate I am to have a job in a place as surreal and breathtaking as Glacier. 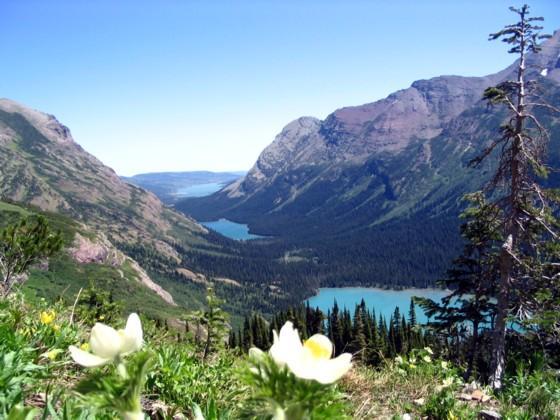 This is Matt’s “office.”

The worst part of the job is two-fold. For one, the hours can be very long, and we end up going fairly long stretches without much time off (for instance, 8 days in a row of 11 hour days). On a hot day in August, it can be tough to focus and give commentary to grumpy tourists asking the same five questions that you have heard for the past 3 months while you are sweating through your long pants and tie in 85 degree weather. It does get a bit repetitive, and as long as you are around the bus, you are always in the spotlight, always answering questions and acting as an ambassador for the park. Driving itself can be stressful on our narrow road with a wide and long bus. Right now the Sun Road is under heavy construction and that can provide us with a bit of stress, too. Every year there are broken mirrors and scrapes with the wall for many of the drivers, and it never ceases to be an embarrassing moment among both passengers and peers when one hits the wall. So far this year, I have been fortunate – although many drivers have had a run in with the wall.

Most people seem to think that this job is lucrative, and it is far from it. The job is definitely a labor of love, and if you do not enjoy it then it will be a miserable season for you. Between the heat, the long days, and some of the tour directors that we have to deal with on a daily basis, the job is not without its share of pains. We do get a fair bit of tips on occasion, but we are far from being able to retire at season’s end with our earnings.

The work and life balance can be a hard one to juggle at times, and sometimes a social life has to get cut shorter than I would like.  An average day can consist of getting up at 7 in the morning and finishing anywhere between 6:30 and 8 that evening, after dropping off the guests, fueling, and washing the bus. After a few days in a row of that schedule it can leave little time and energy for social pursuits, but you learn to manage your time and are still able to enjoy your time off without putting yourself in too bad a way for work the next morning. The park is an outdoorsman’s and photographer’s paradise, and most of my days off are full of hiking around the over 750 miles of trail that we have in the park. Nothing is more stress reducing that spending a day getting to the top of a 9,500 or 10,000 ft peak with a few good friends and seeing some of the most amazing sights you could ever imagine seeing in a lifetime. I may not have had as much time off as I would like, but it is easy to maximize that time in a place like this.

I feel extremely blessed to be able to live the kind of lifestyle I am right now, and coming up here was one of the best decisions that I could have ever made for my life. After even just a few short months of the rat race in New York City, I knew that it was something that I was not quite prepared for, and getting out of it to a place like this was exactly what I needed. I don’t intend on traveling like this for the rest of my life but I think that it is important to not be afraid to think outside of the box if you are not sure what you what to do or where you want to end up. I have so many friends who left school only to get tied down to a desk job that they don’t enjoy. They always mention how they envy me for going out and doing something different, and they wish they could do the same. The fact is, it is as easy as putting yourself out there and looking around – that was all it took to end up in one of the greatest places and jobs in the world. So if you are thinking about doing something like this, just stop thinking and do it. It is never too early or too late to try something new and great.