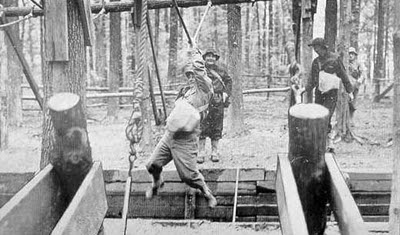 In Parts I and II of our series on vocation we talked about what a vocation is.

In Part III we put forth an argument for why every man should pursue his vocation.

In Part IV we discussed how to find your vocation.

In this final installment in the series, we will discuss the obstacles men face in going after and embracing their true vocation.

I mentioned last time that I do not feel like finding your vocation is the truly hard part of this process; I think most men, deep down, intuitively know what they feel called to do with their lives, even if it’s buried deep inside them. I don’t doubt that for some men the finding of the vocation is indeed a struggle, but I do think that if you set a majority of guys down, and asked them, “If there were no obstacles in the way, if you could do any job, what kind of work would you choose?” that the answers would come fairly readily.

Of course in real life there are obstacles in the way. The obstacles that most likely first leap to mind are tangible, external things like time, family commitments, and money. But the obstacles that truly hold us back are the ones we place on ourselves; it’s self-sabotage of the highest order. When these internal, self-imposed obstacles are cleared away, we become willing to break through any of the external things that hold us back. Today we hope to help you recognize and identify the roadblocks you have placed on the path to your destiny.

Obstacles to Embracing Your Calling: The Jonah Complex

Dr. Maslow believed that what held most people back from fulfilling their highest potential was something he termed the “Jonah Complex.” The story of Jonah, found in both the Bible and the Qur’an, is a familiar one. Jonah the prophet receives a call from God to preach to the city of Nineveh. But Jonah refuses to go and sails in the opposite direction towards Tarshish. Jonah’s disobedience creates a storm that gets him booted off the boat and then famously swallowed by a whale. The whale spews him out three days later, and when God again calls Jonah to preach to Nineveh, he goes.

Maslow saw this story as symbolic of the way in which humans often deny their fate (and suffer the consequences of doing so). It was this “fear of one’s greatness,” “the evasion of one’s destiny,” the “running away from one’s own best talents” he deemed the “Jonah Complex.” Why do we make like Jonah and flee from our callings? Maslow believed that:

“We fear our highest possibilities (as well as our lowest ones). We are generally afraid to become that which we can glimpse in our most perfect moments, under the most perfect conditions, under conditions of great courage. We enjoy and even thrill to the godlike possibilities we see in ourselves in such peak moments. And yet we simultaneously shiver with weakness, awe, and fear before these very same possibilities.”

This general fear of our highest possibilities is actually composed of many smaller fears:

The fear of the unfamiliar. We have an ingrained fear of the unknown. The familiar, even if it’s painful, is comfortable. At least we know what to expect; we know the pain like an old friend.

The fear of change and sudden pain. Related to our love of the familiar is a fear of change and the shock it brings to our secure life. We prefer constant, dull pain over a long period to a sudden jolt to the system, even though the low grade pain is slowly killing us.

In a study done in the 1950s, monkeys could avoid getting shocks which could come at any time by vigilantly pressing a button. They avoided all but a few, but after 3 weeks, most died of ulcers. Constantly working to avoid the pain had killed them in the end.

The fear of losing control and identity. The reason we like familiar settings is that they allow us to feel in control. As we discussed in Part V of our Resiliency Series:

“Tying your self-concept to external factors also keeps you from embracing adventure and approaching the world like a courageous explorer. If you base your self-concept on external things, any changes in those things will throw you for a loop, create anxiety, and compel you to cling as tightly as you can to the status quo. You become desperate to keep your life just the way it is and can’t handle change. You avoid traveling, moving, changing jobs, and getting into relationships because these steps alter the environment on which you’ve based your self-concept, leaving you feeling lost and out of control.”

The fear of being set apart from others. Many people distrust and resent those who are more talented or successful than they are. Such gifted people make those who have buried their potential feel uncomfortable, for they remind them of their choice to remain mediocre. Gifted and successful people are therefore frequently criticized by those who are jealous of their achievements.

Once you start doing great things, you become a bigger target, receiving more attention and more criticism. Some men would rather remain small than deal with this kind of visibility and vulnerability.

“To avoid criticism do nothing, say nothing, be nothing.” -Elbert Hubbard

The fear of being ridiculed. There is enormous pressure in society to conform to being ordinary and mediocre. Those who accept the status quo, which is the majority of society, will deride your plans to break free, hoping to keep you down at their level.

The fear of failure. Many men have a deep fear of failure. They’d rather not see if they have what it takes to fulfill a dream because of the fear of finding out that they don’t. We also fear what it will take to maintain success if we do achieve it. We will be able to sustain it?

The fear of our own greatness. For Maslow, this was the heart of the Jonah Complex. Experiencing greatness can be an amazing, even overwhelming experience, like looking at the sun. We’re afraid that traveling to that place will cause us to disintegrate, in the way that pilots used to believe that breaking the sound barrier would destroy their planes.

“What is to give light must endure burning.” Viktor Frankl

Obstacles to Embracing Our Calling: Strategies of Restless Non-Compliance

How do these fears manifest themselves in our lives? When you think about fear, you might picture a man cowering in the corner. But a far more common way to deal with our cowardice is to fill our lives with restless busyness-activities that distract us from the fact that we’re afraid and ignoring our calling.

In Callings, Gregg Levoy lists 8 of these “Strategies of Restless Non-Compliance” that we engage in consciously or unconsciously:

Hiding behind the tasks of discernment. One of the most common ways to keep from embracing one’s vocation is to overthink it. We analyze it to death, picking it apart with so many questions and doubts that we get exhausted into paralyzing inaction and can forget about it for awhile.

Waiting for the Perfect Moment. This is another popular one. You swear you’re going to start going after your calling just as soon as x,y, and z falls into place. When you’re out of college, when the economy gets better, when the kids are older. But even when those things happen, you find other reasons why it’s not a good time. The truth is that there is never a perfect moment to start going after your dreams.

Telling yourself lies. Levoy points out that when we say things like, “I can’t afford it,” what we really means is “I won’t afford it.” We convince ourselves that’s it’s an impossibility when the truth is we’re just not willing to accept the work and the sacrifices to make it happen.

Choosing a path parallel to the one you feel called to, one that’s close enough to keep an eye on it but not so close you’re tempted to jump tracks. You want to be a writer but settle for teaching English. You want to start your own business but settle for working as a salesman for a company.


Attempting to replace one calling with another because you don’t like it, your parents don’t like it, it doesn’t earn enough money or prestige. Pretty self-explanatory.


Distracting yourself with other activities. You fill your life with copious amounts of projects, noise, and stuff to drown out the sound of your call.

Playing “sour grapes.” You convince yourself you didn’t even want the vocation anyway, often by trying to find out all the negative things about it to try to make yourself believe it wouldn’t have been so great after all.

“Be regular and orderly in your daily affairs that you may be violent and original in your work.” -Gustave Flaubert

This is the point that we sometimes get to in posts where I say that unfortunately, I can’t offer you an easy solution to your problems. And such is the case when overcoming the obstacles to embracing your vocation. It’s important that you identify exactly what is holding you back and then you must either decide that living up to your highest potential is worth breaking through those fears or that you’re okay with playing it small. You either muster up the courage to go after your calling or you don’t. Period. It’s a matter of choice, will, and what you want to do with your life.

But deciding to embrace your vocation doesn’t have to mean jumping into it tomorrow. We live in a quick fix culture-we want to change our lives and do it in 28 days. But it’s okay to simply formulate a plan and take it step by step. I have a five year plan for getting to where I want to be. It’s not glamorous, but it’s realistic and it’s doable.

Levoy suggests thinking of yourself like a compass. You keep one of the points of the compass fixed, while the other one is free to draw circles. Keep part of your life stable, while part of your life seeks after your calling. Eventually, you’ll be able to put both feet into your vocation.

We hope this series has helped you think more deeply about your vocation in life and inspired you to find work that truly taps into your unique gifts and talents. As you go forward and pursue your true vocation, keep a few things in mind. Sometimes we imagine that doing what we’re meant to do will feel effortless. But it’s going to be hard work. Really hard work. There will still be plenty of “dead work.” You will still have days when you won’t feel like going to work, when you want to quit. Such is the nature of all work.

But it will not be work that feels done in vain. It will be work that expands instead of contracts your spirit, that leaves you feeling more, not less alive. It will be work that stretches you, grows you, and helps you reach your potential as a man. It will be work that fills not only your hunger, but a hunger in the world. Most of all, it will give you the insurpassable feeling that there is a reason and purpose for your being here, and that you have fulfilled that purpose. That you are where you are supposed to be, doing what you were meant to do.