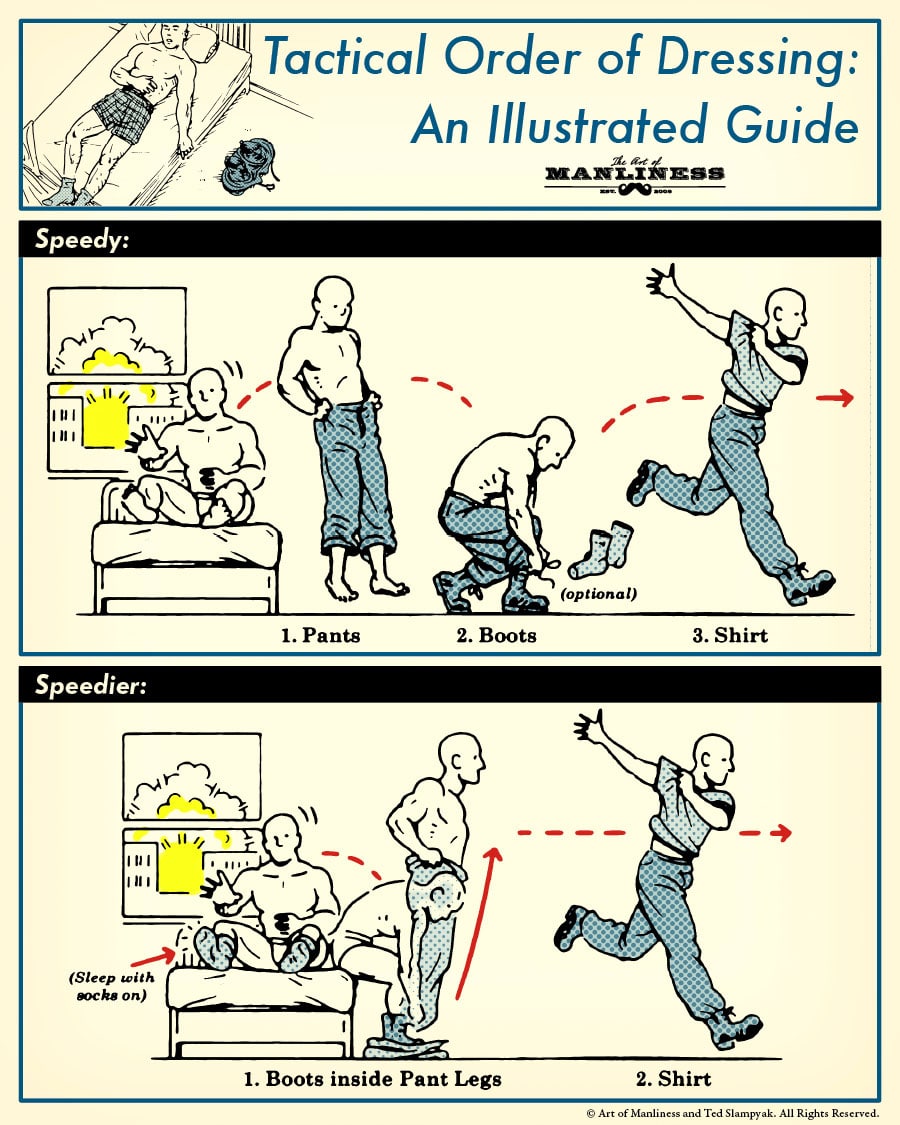 If you were suddenly awoken in the middle of the night and needed to go outside to fight off a threat or evacuate from your home, in what order would you don your clothes? Does it matter?

Military and emergency personnel are often taught a specific order in which to put on their clothes that is most efficient and effective. On ITS Tactical, Bryan Black shared the order of dressing he picked up in BUD/s: First you pull on your pants, because you’re going to need something to protect your lower body from brush, debris, hot shell casings, and what have you. Then you’ll put on your boots. If you’re not going far, you might be able to get by in barefeet, but you’ll need to be shod if you’ll be moving out over rough terrain. Whether you put on socks or not is dependent on how much time you have; if seconds matter, you can go without. In boots and pants you’re pretty well set. If you have time, you grab a shirt too.

Eric, a former Navy SEAL and owner of the BlueCore Shooting Center in Lakewood, CO, sums it up this way: “I would always tell myself to put on pants first and then shoes. Socks would be a luxury if I was in a rush. Shirt is last, and probably the quickest. Operational uniform was always near the bed and always ready to roll.”

“Place your clothes and weapons where you can find them in the dark.” – Robert A. Heinlein

In the comments on the ITS Tactical post, a fire/rescue technician detailed his method for suiting up in an even speedier way: leave your pants lowered around your boots by the side of your bed. Then you just have to stick your feet into your boots, pull up your pants, and run out the door.

Eric shared an additional tip that always ensured he was prepared: “If I washed my pants/shirts, I’d take EVERYTHING out of my pockets and put them into a new pair. That way there was NEVER a time where I didn’t have a set of cammies ready to roll!”

Of course, if a threat is truly imminent, you may need to face it down in whatever it is you wore (or didn’t wear) to bed. Like this soldier in Afghanistan who was roused from sleep by enemy fire on his post in eastern Afghanistan, and took on the enemy in his pink “I Love New York” boxers: 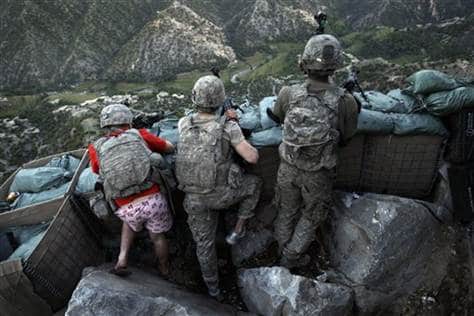 When this photo was featured on the front page of The New York Times, the soldier was initially embarrassed and even worried he might be reprimanded. Instead, Secretary of Defense Robert Gates praised him, and even noted that such a get-up might actually be used as a tool of psychological warfare: “Any soldier who goes into battle against the Taliban in pink boxers and flip-flops has a special kind of courage. I can only wonder about the impact on the Taliban. Just imagine seeing that — a guy in pink boxers and flip-flops has you in his crosshairs.”

So if you need to roll out quickly, try one of the methods illustrated above, and if you don’t even have time for those, confront the threat as is: a man standing in nothing but his birthday suit with a shotgun might be just the thing to frighten an intruder off!

Whether or not you ever have to get out of dodge in a hurry, the tactical order of dressing is just one of those cool things to know; besides helping you flee fires and face assailants, it’s helpful for getting to the door decent when the person you made an appointment with rings your doorbell and you’ve overslept!

If you might need to get up to tackle a threat, and could use a shot of grit when you do, Eric shares this tip from a hardcore Afgani interpreter he worked with who had fought with the Mujahideen against the Russians: “He ALWAYS (still to this day) sleeps with his feet facing Russia. That way, he can sit up anytime at night and be facing the direction of his enemy!”