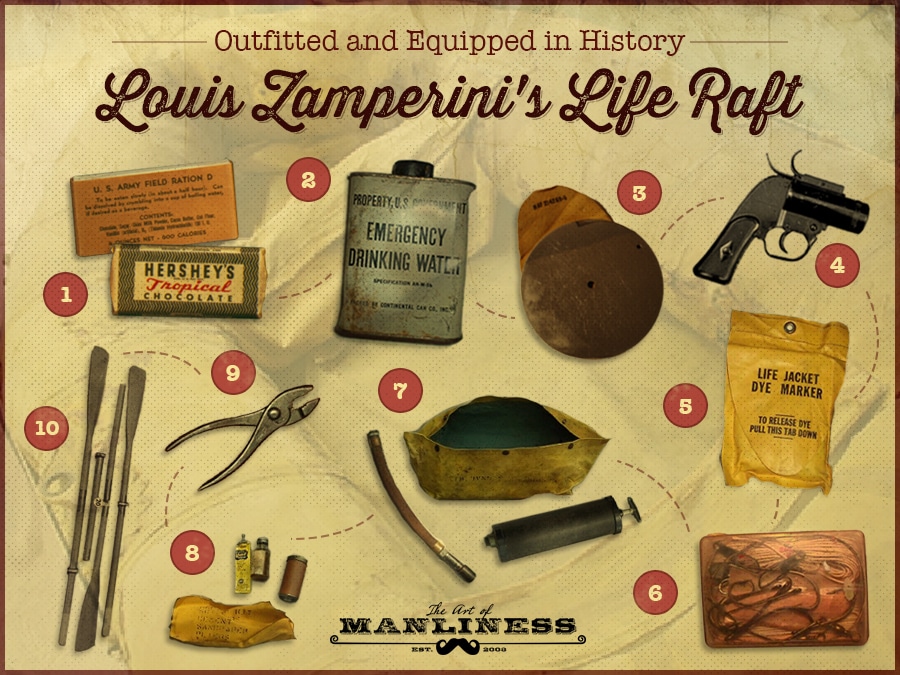 “With Phil incapacitated and Mac a mental wreck, both now depended on me. I had to muster all my resources and training because without food and with only a little fresh water remaining, I had no idea how long we could last.” –Louis Zamperini, Devil at My Heels

As we explored in today’s article, the life of Louis Zamperini offers us many incredible Lessons in Manliness. One of those lessons – on being resourceful – I thought would be pretty cool to detail in a separate post.

When Zamperini’s B-24 went down in the shark-infested Pacific Ocean, he and two crewmates (pilot Russell Allen “Phil” Phillips and Francis “Mac” McNamara) had to survive with only the supplies that had been stashed in the pockets of a pair of small life rafts. It wasn’t much. The military would soon add many more pieces of essential equipment to these emergency rafts — sun tarpaulin for shade, bailing bucket, mast and sail, sea anchor, sun ointment, first aid kit, puncture plugs, flashlight, fishing tackle, jackknife, scissors, whistle, compass, Gibson Girl radio transmitter, and even religious pamphlets for morale. But Louie, Mac, and Phil would not enjoy the benefits of these future additions. They had no knife, almost no food, and no navigation equipment whatsoever.

Despite the scant supplies, Louie was determined not to panic and to make do with what they had. He persistently and creatively put the few items at their disposal to ample use, and in so doing, was able to keep he and Phil alive for an unbelievable 47 days at sea. He was a veritable castaway MacGyver. As his brother Pete told their mother to comfort her when Louie went missing: “Just give him a toothbrush and a scout knife, and he can take care of himself.”

Below are the tools Louie had to work with, and how he marshaled them in his fierce fight against death.

Note: The gallery shows symbolic visual approximations of each item in Louie’s raft. While an effort was made to find an image of each exact item, in a few cases a suitable picture of it could not be found, and an image of a similar item was substituted.

1. 6 Hershey’s Military Issue Ration D Bars. A separate provisions box filled with survival rations was lost in the crash. The only food the men had were 6 Ration D chocolate bars. The bars were specially formulated to be melt-resistant, high in calories, and full of vital vitamins and nutrients. The military had designed the bars to be a little bitter, so that the troops wouldn’t be tempted to eat them until an emergency arose. The bars were divided into six squares, and the men were supposed to eat one square in the morning, and one at night, letting the chocolate melt in their mouths over a period of 30 minutes. Unfortunately, during the castaways’ first night on the raft, Mac panicked and ate all six bars himself while Louie and Phil slept. For the rest of their journey, any food would have to be secured by the men themselves.

2. 8 Half-Pints of Water. The only drinkable water on the rafts was encased in 8 half-pint tins. Once these were consumed, the men had to find a way to harness the rain for their water supply.

3. Chromed Brass Signaling Mirror. Louie used the pliers aboard to cut “teeth” into this signaling mirror and turn it into a versatile tool. After catching two albatrosses that happened to land on the raft, he used it to cut the birds open and dismember them like chickens. He also used the mirror just as it was intended – to flash a plane flying nearby. The signaling attempt was a success, but the result was disastrous – what had looked like an American B-25 turned out to be a Japanese bomber, which circled back to the source of the glinting light and strafed the men 8 times. While the men were miraculously unharmed in the attack, it left the two rafts riddled with 48 bullet holes. One of the rafts had been completely destroyed, and Louie ripped the canvas fabric off  its rubber shell and transformed it into a sun cover for the day, and a blanket for the cool nights. The mirror also came in handy for repairing the holes in the remaining raft. Before applying a patch, Louie first had to score the rubber to give the glue a textured surface to which to adhere. The grit on the sandpaper included in the patching kit had washed away, and so the mirror was used for this purpose instead.

4. Flare Gun. Twice the men saw American bombers out looking for them in the distance, and twice they fired flares to try to get the crews’ attention. But in each case, the planes missed the men and flew on. One of the flare cartridges later came in handy though; when Louie caught a small shark with his bare hands and hauled it into the raft, he used the cartridge to prop open its mouth before killing it.

5. Dye Marker. Dye marker was another way the men tried to signal rescue planes. It colored the water around the raft to make it more visible to observers thousands of feet above. Even then, however, a raft drifting among the ocean’s whitecaps was difficult to see from above.

6. Fishing Kit. The fishing kit included on the raft was quite minimal – just a set of hooks and some line. No nets. When Louie would dangle a hook over the raft in an attempt to catch some pilot fish, the sharks would make off with them. He also tried to use leftover albatross bones as hooks, but the fish didn’t care for them. He even turned his lieutenant’s pin into a hook, and it successfully snagged a catch before breaking. So Louie got even more creative – he tied some of the larger fishing hooks to his fingers like a set of claws. Then he’d reach around a fish swimming by, snap his hand shut, and dig the hooks into the fish before pulling it on board.

7. Two Air Pumps in Canvas Cases. After the strafing from the Japanese bomber left the raft with dozens of holes, it quickly lost air, and began to sink into the water – much to the delight of the sharks that had been circling the men ever since the crash. The men had to work the air pumps night and day to keep the raft afloat while Louie worked to patch the holes. The canvas cases themselves proved handy as well – Louie ripped them at the seams and made them into triangular funnels with which to catch the rain. As they filled, the men would quickly suck out the water with their mouths and spit it into the empty tins, working quickly to secure it before a salty wave crashed over the raft and tainted the supply. In fair weather, the cases were used as hats for shade.

8. Patching Kit. The work of patching the holes was tough going. While Phil and Mac pumped air, and kept the sharks at bay by bashing them in the nose with their oars, Louie would pull one side of the raft out of the water, let it dry, make an X through the canvas with the mirror, score the rubber beneath, smear on some glue, and apply a patch. If a wave splashed the surface before he was finished, he’d have to start all over again.

9. Pliers. When Louie first inventoried the supplies on the raft, he was shocked not to find the most basic, essential survival tool of them all — a knife. “My kingdom for a knife!” he would often lament. Instead, the raft came with a pair of pliers with a screwdriver built into the handle. Louie couldn’t understand what castaways on a life raft would possibly need pliers for, but he ended up putting them to good use anyway. In addition to using them to make teeth in the signaling mirror, they were a help in tearing open the albatrosses, and he killed the shark he caught by ramming the pliers through its eye. Once the shark was dead, he used the pliers to cut through its tough skin to get at its liver – the giant fish’s only edible part.

10. Aluminum oars. Each raft came with two aluminum oars. These were used to beat back the sharks that constantly circled them, rubbed the men’s backs underneath the rafts, and even tried to jump aboard – jaws open, teeth bared.

So now you know how Louie handled being adrift on a life raft in the middle of the ocean. How would you fare? Take this quiz from Naval Aviation News, August 1, 1944: 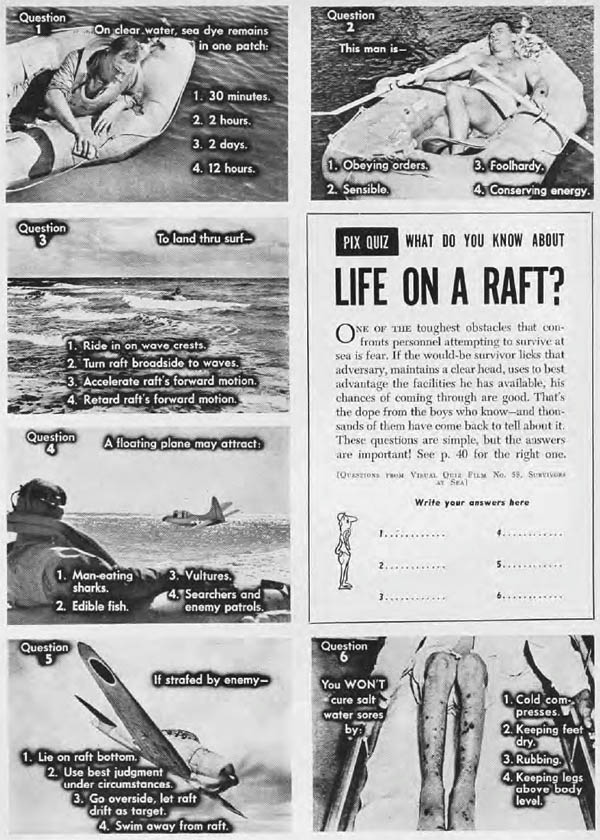