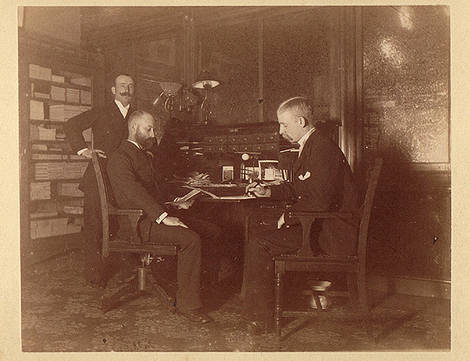 Dealing with criticism is a skill every well-adjusted man should possess. We give and take criticism among our co-workers, our friends, and our family. Criticism is an important part of our personal self-improvement, for it is other people who can point out mistakes and shortcomings that we can’t see because we lack objectivity. Unfortunately, many young men today don’t know how to offer and accept criticism like a man. Instead they handle criticism like little boys. When giving criticism, they opt only to give snide, cutting jabs that do nothing to improve the situation. When receiving criticism, they sulk, make excuses, and argue with the person criticizing them. Ask any teacher who has the nerve of giving a student a poor grade. Today’s students will cry and whine their way to a better one. Or worst of all, have their parents intervene. They simply don’t know how to respectfully accept criticism.

Because we all face situations every day that require us to give or take criticism, we provide the following guidelines on how to make the process more constructive.

How to Give Effective Criticism

Go in cool, calm, and collected. Before you begin to give criticism, make sure you have your emotions in check. This is particularly important if the person did something that really ticked you off. If you go in yelling and banging your fist on desks, you’ll probably get the problem fixed in the short term. However, when you don’t take the time to have a cool and reasoned discussion, you miss out on an opportunity to solve underlying problems.

Be specific. If there’s one thing you remember from this post, let it be this: be as specific as you can in your critiques. Don’t just tell the person, “This sucks,” or “This could be better.” Explain exactly why their work or action is subpar. A blanket criticism will put the person on the defensive, and they’ll never be able to correct their problem.

Criticize the action, not the person. Try to keep the person as separated from their mistakes as possible by criticizing their action and not them. It makes the criticism less hurtful and much more effective. So don’t say things like, “Jeez Louise you must be an idiot! Look at all these mistakes you made in this report!” Just because someone makes a mistake, that doesn’t make the person a pinhead. We all have bad days.

Be a diplomat. When giving your specific criticism, it sometimes helps to use diplomatic words. Our old friend Benjamin Franklin was a master at this (which is why he was probably such a successful diplomat). In his autobiography, Franklin said this about using diplomatic language in discussion:

“When I advance anything that may possibly be disputed, [I never use] the words certainly, undoubtedly, or any others that give the air of positiveness to an opinion; but rather say, I conceive or apprehend a thing to be so and so; it appears to me, or I should think it so or so, for such and such reasons; or I imagine it to be so; or it is so, if I am not mistaken.”

This can help take the sharp edge off of criticism. Sometimes, however, people need that edge to spur them to action. Use your discretion in deciding whether a harsher approach would be more appropriate.

Make specific suggestions for improvement. The goal of criticism should be to help someone make improvements. While specifically pointing out the problem is the first step to correction, if a person doesn’t know what they can do to improve, knowing their mistakes won’t help them one bit. Don’t just tell people what’s wrong with their work, give them specific suggestions on how they can improve it. The key word, once again, is “specific.”

Personalize your approach. Consider a person’s disposition when deciding how to approach the delivery of your criticism. In general, you can be harsher with a man than with a woman. Case in point: at my high school there was an assistant football coach that tore his players up and down for their mistakes. His philosophy was to “tear them down and then build them up.” He then became the girls basketball coach and continued the same uber-harsh tough love approach to coaching. The girls did not respond as the football players had; instead, they broke down and cried and became so nervous before practice that some would throw up. Of course, some women want to hear it like it is, and some dudes are dainty. So think about who you’re dealing with before you lay into them.

Point out positives. When criticizing someone, it’s always good to point out the positives in their work or actions as well. Two benefits exist from this exercise. First, it makes the criticism easier to swallow and reminds the person they’re not a complete screw up. Second, it shows the person what they’re doing right and gives them a reference point on which to base their future work. When beginning a conversations with someone, start with the compliments first. Then transition into your criticism by saying something like, “There is just one area I thought could use improvement…”

Follow up. Always, always make sure to follow up after giving constructive criticism. Your criticism won’t do any good if the person doesn’t put into practice your suggestions. Schedule a follow up with the person you’re criticizing. Say something like, “How about we talk to each other next week to see how your changes are coming and to answer any new questions you might have?” By letting the person know you’ll be following up with them, they’re more likely to get their butt in gear and make the needed corrections.

Listen to our podcast on taking and giving criticism:

How to Take Criticism

Consider the source. You’re going to receive criticism from thousands of people in your lifetime. It’s important to remember that not all criticism is created equal. Determining the source of the criticism and the motivations behind it will help you know how to handle it. For example, Kate and I sometimes get criticism from people who read the Art of Manliness. Much of the criticism consists of “You are stupid” or “This is gay” or “I’m unsubscribing!” We just ignore this drivel. It’s not worth our time or energy to get upset that some random dude from the internet thinks we suck. However, if we get an email from a long-time reader who has contributed to the comments on the blog, we’ll definitely consider their criticism.

If you think the source of your criticism isn’t genuinely interested helping your improve, take their criticism with a grain of salt. At the same time, be sure to honestly assess your critic’s point. Some people are too quick to write off criticism by saying, “They’re just jealous!” Maybe so, but be sure to thoughtfully evaluate the feedback before dismissing it.

Shut your trap and listen. Fight the urge to argue with the person or explain your mistake, and just listen to your critic. You’d be surprised what you can learn if you simply soak it in.

Don’t take it personally. Don’t take the criticism as a personal attack on you. Try to detach yourself as much as possible from your actions or work when receiving criticism so you can look at it objectively. This can be hard to do, particularly if you put a lot of time and effort into something. But trust me, if you make this a habit when receiving criticism, you’ll save yourself from a bruised ego.

Stay calm (even if the other person is being a complete d-bag). The goal in criticism is to keep as much of your emotions out of it as possible. Once you allow your passions to flare up, any hope of making the criticism constructive goes flying out the window. If your critic is being a complete jerk, staying calm can be hard to do. But be the better man. Let the other person do all their ranting and raving, while you sit there looking cool as a cucumber. When they’re done, kill them with kindness. Let them know you understand their concern and thank them for taking the time for bringing it to your attention.

Take ownership of your mistake. When someone brings a legitimate mistake to your attention, don’t get on the defensive and start making excuses for it. Take responsibility for your actions. Many young men today don’t want to own up to their mistakes. They’re always putting the blame on something or someone else. These men will be stuck in eternal mediocrity because they will never accept their need for improvement. While denying your mistakes can keep the heat off for a moment, it will greatly impede your personal progress in the long run.

Change your perspective on criticism. Instead of seeing criticism as humiliating or embarrassing, view it as an opportunity to improve yourself. Winston Churchill had this to say about criticism:

“Criticism may not be agreeable, but it is necessary. It fulfills the same function as pain in the human body. It calls attention to an unhealthy state of things.”

Instead of avoiding criticism, seek for opportunities to be criticized. You’ll find that getting feedback from an outside source will stretch your talents and abilities.

Thank your critic (even when they handed your butt to you). Always thank your critic. This can be difficult. No one seriously wants to say, “Thanks for showing me that I was wrong!” But swallow your pride and sincerely thank your critic. They took the time to sit down with you and point out areas where you can improve. The least you can do is say thanks.