Editor’s note: This is a guest post from Stratton Lawrence.

Sharks don’t get no respect. Sure, they’re given their space when they appear near swimmers in the water, but a respect that amounts to, “I’d be happy to see you dead,” does not bode well for the long-term sustainability of an entire class within the animal kingdom.

In most coastal areas, sharks are a common by-catch for recreational and commercial fishermen targeting different fish species. Too many sharks die unnecessarily out of fear, ignorance or lack of knowledge about how to handle them. On the other hand, many recreational fishermen get ‘hooked’ on shark fishing because there’s simply nothing else in the ocean that pulls like a 12-foot tiger shark. Both groups can benefit from knowing how to keep the safety of sharks in mind as they pursue the hobby and profession they love.

Catching a shark is definitely an incredible experience; as I discovered in the research for this story, even a four-foot sandbar shark provides plenty of thrills on its way to the boat. Once you’ve done it, you may never look at other types of fishing the same way again.

Whether you’re fishing from the beach or a boat, here’s what you need to know to intentionally catch a shark:

Get the Right Bait 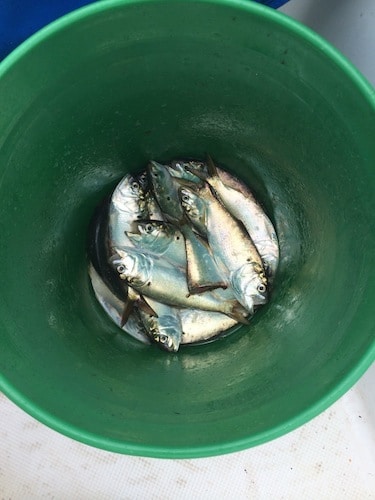 Fishing for sharks actually begins with fishing for whiting, bluefish, or another smaller species of bait fish.

“Whenever I’m going after big fish, whether it’s sharks or tarpon, I want to know what they’re feeding on,” says Newman Lawrence, an amateur fisherman in Charleston, S.C. (He’s also my brother, but he knows what he’s doing, so I like to fish with him.)

The logic is simple: fish for sharks with the same species they’re eating in the spot that you’re fishing. Fresh bait is important!

If you’re in a boat, look for birds fishing in one clustered area. Inch your boat into the vicinity and look for ripples from schools of small fish. Throw your cast net over where you think fish are, let it sink to the bottom, and pull up a fresh load of your bait. 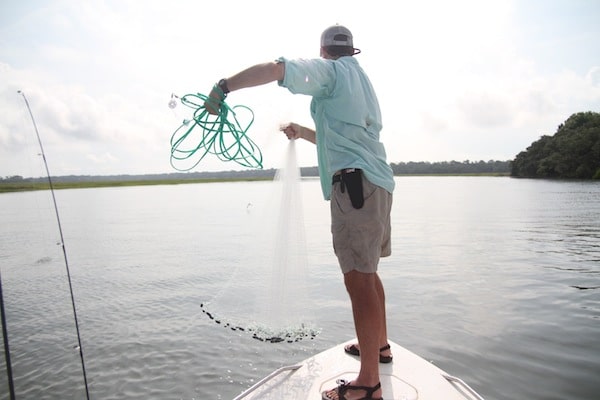 Of course, it doesn’t always work out like that. On our research trip, high tides had pushed the bait fish into the marsh grass, so we anchored near the shoreline and fished with an ultralight rod (a 5’6” Shimano Convergence) using chunks of shrimp to catch a few whiting. (Pro tip: Peel the shrimp you use for bait. They’ll hold to the hook better.)

After thirty minutes, with three whiting and a pinfish in the boat’s livewell, we headed out to our shark spot just north of Edisto Island, S.C.

Once anchored, we threw the cast net a few more times and caught about a dozen menhaden. Sharks, watch out.

To land a shark, you’ll need tackle that can withstand rows of razor-sharp teeth and that won’t break when a shark goes on a run. 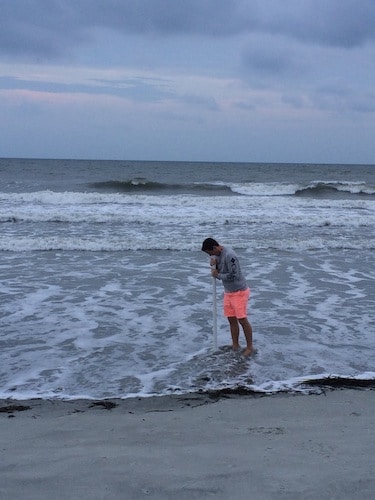 A piece of PVC makes a great rod holder. Rotate it and work it into the sand, creating suction with your mouth to pull sand up into the holder and push it deeper into the ground.

Shark fishing isn’t like cane pole pond fishing. Use your boat’s rod holders, or on the beach, sink a PVC rod holder deep into the sand. Once your bait is cast, you’ll leave it and wait until the line goes screaming. 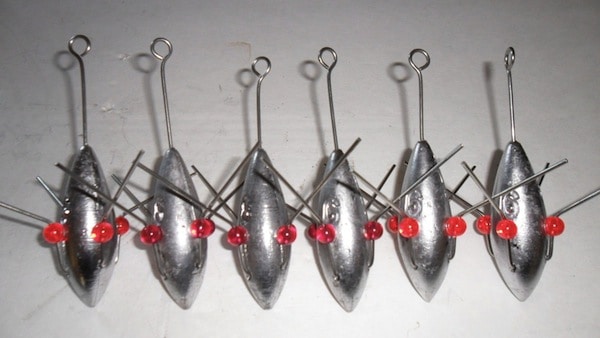 If you’re fishing in the surf, a “sputnik” sinker can help hold your bait in place, rather than drifting with the current or washing back onto shore.

For sharks up to about 7 feet, a 60 lb. braided line is sufficient for your main line. But, you’ll also need about a rod’s length of strong monofilament line at the end, before your leader, to absorb shock as the shark runs, or if you hook a species like blacktip that go airborne and leap from the water. Finally, use at least two feet of wire leader at the end. A shark can thrash around or swallow enough line to bite through even the thickest monofilament.

It’s a “match the hatch” game when choosing hooks. First of all, always use circle hooks — this will help assure that the shark is hooked in the mouth, not in the stomach. You don’t plan to remove a hook from a shark’s stomach, do you? Keep your hands safe, and your shark alive, by using circle hooks. Plus, they work better. With this variety, the shark will set the hook just by pulling away. 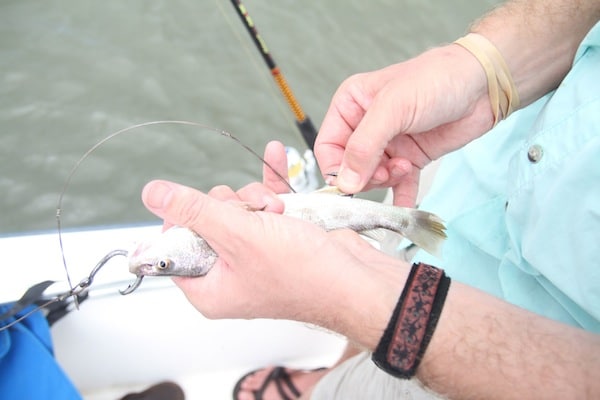 For most sharks, a 6 to 10 aught circle hook will do the trick. When rigging up a live whiting, one method is to set up two hooks, with one through the whiting’s mouth and another that runs through its back and trails behind. With cut bait (the head or tail of a menhaden or whiting, for example) one hook is all you need. 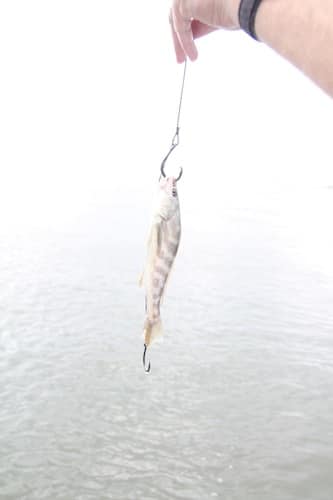 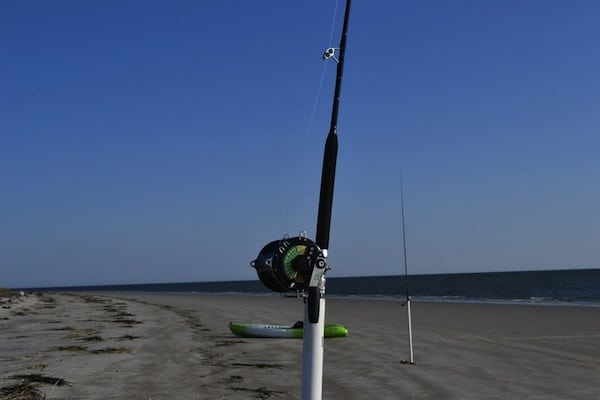 In general, get a 6,000 to 8,000 size spinner reel, and a 10-12-foot rod. eBay has tons of affordable options, as well as high end models. A Penn Battle 6000 is a suitable starter reel. Once you seriously commit, you can graduate to Everol reels.

If you’re new to the sport, remember that fishing began as a poor man’s pastime, and it still can be. Of course, if you want to drive a Cadillac, it’s available, but you can still catch a big ol’ shark with a Chevy. 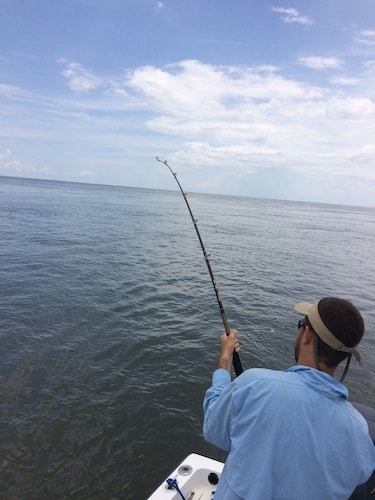 The author reels in a sandbar shark.

One of the biggest mistakes beach fishermen make is to wade out to chest-level water and then cast their bait beyond the surf. Like it or not, the sharks are in the surf, where you’d typically be swimming. Cast right there.

If you’re targeting big sharks (6 feet or longer), however, they’ll hang out where the shore drops off, just beyond the waves. The easiest way to get your bait there is to kayak out beyond the breakers, drop your bait, and then kayak back to shore.

Now comes the fun part — your first bite. You’ll know when a shark hits, because your rod tip will bend almost to the water and your reel will scream. After you cast, set your drag just loose enough that a shark can take your bait and run with it. You don’t want him to immediately know he’s hooked.

Once their run lets up for a second, tighten your drag. Give a slight tug (the circle hook should have already set itself). Now they know they’re hooked, and they’ll make a second run.

The game of tug-of-war begins. Don’t rush it. Landing a big shark can take well over an hour. When the shark gives you some slack, reel away. Keep your rod tip up, and when you feel the opportunity, lower it slightly and reel in some line.

Inch the shark closer to the beach or to your boat.

Now for a couple considerations specific to boat and beach fishing respectively: 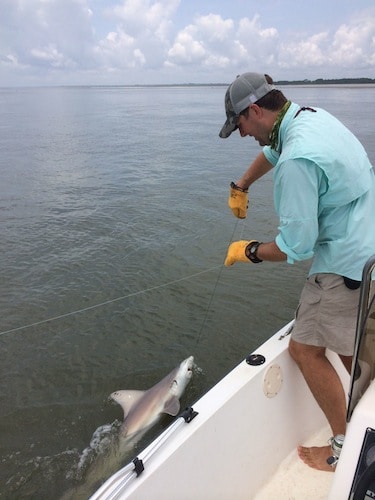 A sandbar shark, caught from a boat by the author and his brother, and released while still in the water.

Make a decision — do you need to bring this fish onto your boat, or are you happy to release them without removing them from the water? The latter will dramatically improve their chance of survival, unless you’re extremely fast in bringing them onto the boat.

Did we mention a cardinal rule of shark fishing yet? Never fish alone. Once your shark emerges in the shallow water, you’ll need to hold onto the rod while your partner approaches the shark in the water. If it’s a big guy, use a rope around their tail to gently pull it to the shore. If it’s a small shark, grasp their tail or pectoral fins (not their gills!) and pull it backwards to shore.

Always keep the shark’s mouth facing the ocean so that they can continue breathing with help from waves or the slightly deeper water. You don’t need to pull them all the way onto hard sand. Leave them in the soft sand where waves continue to splash over them, or in enough water that they can breathe (but in a place that you can safely remove the hook). All the while, remember that sharks have teeth, and they can bite you. Be careful. 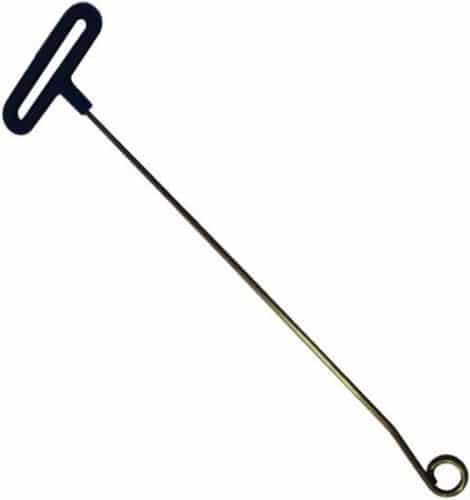 Here’s rule number two: when you catch a shark, you have two minutes with it, or less. Big sharks only give birth every few years, and letting one die unnecessarily is a devastating loss to the ecosystem.

Before you go shark fishing, put the following items in your tackle box:

Once you’ve caught a shark, your number one priority is to ensure its survival and safe return to the ocean. If you’re going to fish for sharks, you need to have the right tools. In short, be prepared in advance, and in the moments before landing your shark.

Give yourself ten seconds to remove the hook, either using pliers for a small shark, or with a dehooker tool (they’re cheap — buy one). If you can’t remove the hook in ten seconds, snap it in half with wire cutters or bolt cutters. You can afford to lose your hook — don’t risk a shark’s life.

Now, you have about twenty seconds to take photos. That’s not necessarily enough time for everyone in your crew to get their own picture holding the shark. Get a group shot, if necessary. Even better, take pictures with the shark in the water. Lift its jaw from behind for a few seconds, and then get it back into the water.

On the beach, push the shark back into the ocean, face first, until it’s deep enough to swim off on its own. High five your friends and drink a beer. You caught a shark and set it free.

Shark fishing has its detractors. For every five people who walk by on the beach and ask, “Catching anything? Sharks? Cool!” there will always be one who thinks it’s an awful, terrible thing to do. Maybe they’ve read about the devastating shark fin industry in Asia, and are justifiably concerned about the health of the ocean’s overall shark population. Or perhaps they’re just concerned about the sharks feeling pain (most research notes that sharks and other fish don’t actually feel pain at all).

Your best defense is knowledge.

“People need to know what’s out there to respect and protect it.” Catching sharks is one way to do that.

“To some extent, any type of fishing does harm,” he concedes. “Everything we do as humans has an impact.”

When done properly and in a manner that ensures the continued wellbeing of the animal, shark fishing is not unlike any other type of catch-and-release fishing.

If you do take up shark fishing in earnest, consider participating in NOAA’s shark tagging program. The information NOAA gathers contributes to catch limits and regulations set for commercial fishermen, and is designed to protect sharks and at-risk species. By adding a tag to the fish that you catch, you can add to our understanding of shark populations and migration, helping to protect these fish for future generations.

Now get out there, be safe, and have fun. See you on the water.

Stratton Lawrence is a writer based in Folly Beach, S.C., where he regularly surfs, kayaks and fishes. When it rains, he ducks inside to blog about his outdoor pursuits for eBay.com, where he regularly loads up on gear. To see eBay’s selection of fishing reels, including options suitable for catching sharks, click here. Follow Stratton on Google+.