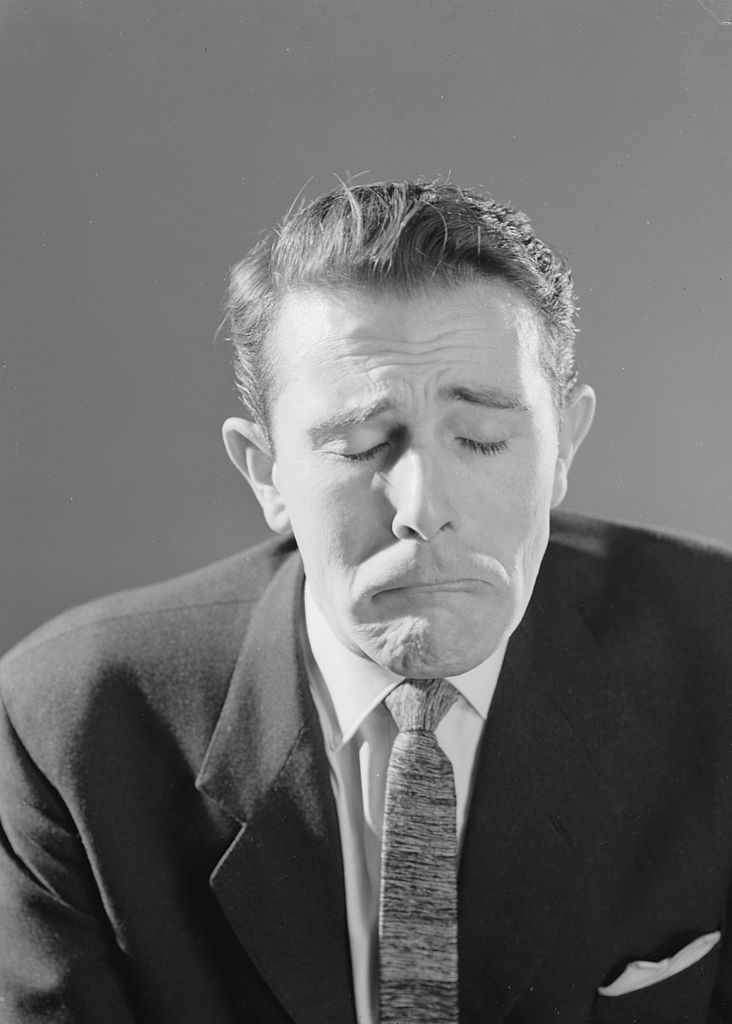 As discussed as part of our Social Briefings series, “elevation” constitutes one of the “4 social gifts” that change how their recipients feel for the better, and make their bearers more attractive, likable, and charming. Those who elevate are able to lift others’ moods, and they do so by leading with positivity. Positive people come off as resilient, low maintenance, and high-status — as folks who will add something to people’s lives.

In contrast to the social gift that elevates, is what might be termed the “social killer” that depresses. Negativity, in fact, is one of the most significant saboteurs of social success.

If you feel like your social game’s been less than effective, and that people seem less interested in forming a relationship with you than you’d like, it may be because of a tendency to act like an Eeyore around others.

Today we’ll help you recognize your downcast donkey attributes, dig into why they’re such a social slayer, and offer tips on how to interact with others in a more positive and winning way.

Why Is Negativity Such a Buzzkill?

As we’ve discussed previously, people want to form relationships with those who seem like they’ll give more (or at least as much) than they take — folks who will be a social asset, rather than a social burden. Negativity, manifested in a propensity to criticize and complain, serves as one of the strongest signals to others that you’re likely to be the latter rather than the former.

Here’s why negativity reads as a social cost:

Negativity points to undesirable underlying personality traits. Those who complain a lot about their lives, and gripe about annoyances big and small, show that they are potentially:

Given this perception, research has unsurprisingly shown that people find bellyachers weaker overall and much less likable, friendly, and reliable than those with a more positive orientation.

Complaints make your life seem problem-ridden. Offering folks a laundry list of your issues communicates that your life may be chaotic, unstable, stagnant, etc. People feel like they have enough problems of their own to want to get involved with yours.

Complaints are boring. In fact, research has shown that people find complaints the most boring topic of conversation, bar none. Your poor health, what went wrong at work, or the terrible traffic you navigated to get to the party may seem like super salient and interesting subjects to you, because they’re at the forefront of your mind. But they’re significantly less interesting to other people.

Negativity boomerangs back. Because of a psychological phenomenon called “trait transference,” the qualities you use to describe other people, get associated with you. So if you’re always criticizing and casting shade on other people, folks come to see you under the very same shadow.

In other words, it turns outs there’s really something to that old childhood chant: “I’m rubber, and you’re glue, whatever you say bounces off me and sticks to you!”

Negativity is contagious. It may seem unfair that people treat the negatively inclined as if they had the plague, but that metaphor’s actually not too far from the mark. Negativity not only affects the “carrier,” but inflicts a social cost on those within their range — it tends to spread like a contagion. Someone may be in a great mood, really enjoying their afternoon…and then they get stuck in a conversation with a Negative Nancy, who drains away their positive vibes, essentially robbing the person of their good mood. An Eeyore can even dampen the energy of a whole room, just by walking into it.

The fact that negativity is “catching,” leads people to back away from those with storm clouds above their heads, lest they too get soaked.

Lead With Positivity; Use Negativity Sparingly

Just because it’s ill-advised to share a laundry list of what’s going wrong in your life with someone you’ve just met, doesn’t mean you should never share a complaint or critical comment during one’s first and subsequent encounters. Relentless, Pollyanna-ish positivity can read as fake and be just as off-putting as excessive negativity.

Rather, the proper mix of negative, positive, and neutral comments to offer is a matter of order and balance. Here are some tips on how to navigate this dynamic:

Project a positive mood walking into a room. First impressions are solidified extremely fast, and last a very long time; it can take weeks, and even months for people to change their initial idea of you. So it’s important to lead with positivity, and that begins with the first part of your first impression: how you enter the room. Your entrance will set the tone for the rest of your interactions, and for the event as a whole.

Projecting warmth, openness, and friendliness makes you less threatening and more approachable; it makes people want to engage with you.

Plus, it contributes to the positive vibes of the event as a whole. Just like you should cover your mouth when you sneeze, you should let go of your negativity before you walk into a room to avoid infecting others with the contagion. Self-awareness and social generosity are winning qualities that others can sense and appreciate.

Keep in mind that while you may feel that annoyances prior to an event “justify” your bad mood, when people see you walk into a room, they’re not going to think, “He’s scowling because he just drove through some heinous traffic.” They’ll just think, “Who’s that grouchy killjoy over there?”

So as you cross the threshold into an event, drop the storm cloud at the door, and see the situation as a fresh start for a good time.

Front-load positive topics into conversation, saving negative/critical/heavy comments ‘til later. Continuing with the principle of leading with positivity, keep the initial topics of your first few conversations with someone on a positive track. Beginning with negative stuff will cause alarm bells to ring in the other person’s head, and a create a first impression that perhaps permanently slots you in the “social burden” category.

Refraining from negativity not only means curbing your complaints and criticisms, but also initially staying away from disclosing “heavier” things about yourself — issues from your past and present that deal with mental/physical/emotional health, divorce, fears, abuse, financial woes, etc.

Generally, a topic is too heavy if it puts the other person into a supportive or nurturing role, where they’re offering empathy and saying things like “That’s too bad,” or “That must have been really hard.” When you turn a first encounter into a therapy session, you register as a social burden, rather than a social asset.

Of course, sometimes it naturally emerges that you share some heavy experience in common, and you end up bonding over that, which is fine. You just shouldn’t try to deliberately initiate that line of discussion, nor shoehorn your issues into the conversation.

Realize that while negative stuff in your life may be just a small slice of who you are, that little slice is all a new acquaintance will know of you. Without greater context of other, more positive, parts of yourself, they’ll take your negative news as indicative of your life as a whole.

Once you’ve gotten to know the person some, and they’ve gotten to know you — once you’ve built a scaffolding that shows people you have plenty of positive things going on in your life too — they’ll be better prepared to handle the weight of your weaknesses, flaws, and past pain. They’ll be more willing to say, “Helping him with this issue is going to require my patience and energy, but I’m okay with making that emotional investment because his good qualities outweigh the bad.”

Don’t (much) discuss your exes on a first date. While complaining or even commiserating about your exes may seem like a good way to bond with a new love interest, it starts your nascent relationship off on a negative foot, where you’re connecting over things you don’t like about people, rather than your positive interests. And remember the rubber/glue principle: the criticisms you level at other people will become associated with you.

So keep to this general rule: only bring up your exes if they’re absolutely relevant and necessary to the conversation. A years-long relationship can have been a big, influential part of your past, so much so that it’s impossible to talk about your present without reference to it. For example, if your date asks how you ended up in California, it’s certainly appropriate to say that you followed your girlfriend to the coast, and that even though you broke up, you decided to stay.

Outside of what’s necessary to discuss the basics typically surfaced on a first date, however, don’t leave a seat at the table for the ghosts of your past. Talking too much about an ex can make it seem like you’re still not over her, and talking about the hurt she put on you forces your new lady friend into the nurturing role. Again, a date is not a therapy session.

Never “one-down” people. While a sprinkling of more negative/critical comments can be okay, you never want to “one-down” people; that is, when someone shares something that’s gone wrong in their life, you don’t want to say, “Oh that happened to me too, but even worse.” A one-upping contest makes you seem insecure; a one-downing contest makes you seem insecure…and majorly depressing.

Use humor and self-deprecation. Sometimes there’s no way around sharing the fact you’re still living with your parents or between jobs. Be honest, but also share these less favorable bits with a dose of humor and self-deprecation. “I was bummed I had to sell my car, but hey, I’ve always wanted to try biking to work, so I guess this is my chance to finally break out the spandex!” You may have less status in a certain area, but the fact you don’t take yourself too seriously is a point of status in and of itself.

Sometimes it’s particularly okay to complain/be critical. There are a few situations where complaining can not only be appropriate, but even advisable:

Pivot to resilience. When you do share a negative fact about your life, follow it up with how you’re dealing with it in a resilient way. “It’s been hard being out of work, but my dad’s sick, and I’ve been able to use the time to take care of him, so it’s worked out well in that way.”

If someone asks you how you’re doing, and you don’t want to put on a totally fake façade, say something like: “Until I got to this party, my day honestly wasn’t going well, but now I’m having a great time.” Such a comment winningly shows your gratitude for the host, that you’re not someone who dwells on negativity, and that you’re able to bounce back from being in a funk.

If you’re someone who struggles with negativity, know that while it can be a disadvantage in social success, socializing is, ironically enough, also its best remedy. The more you forget your own problems, and concentrate on helping others have a good time, the better you’ll feel yourself.