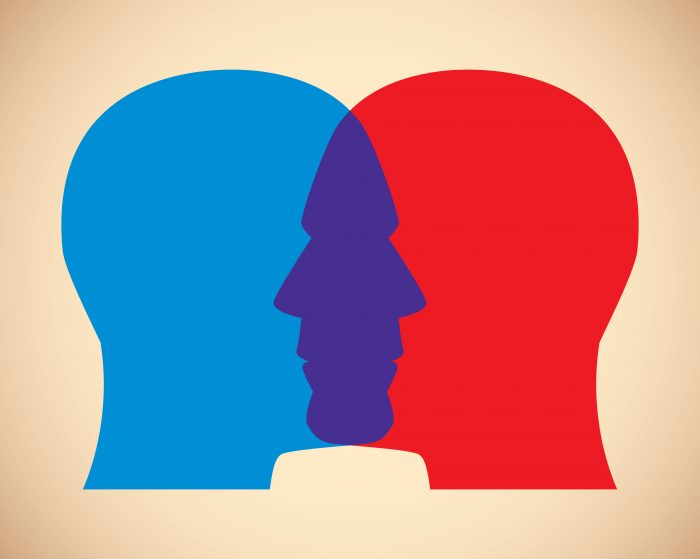 Navigating first impressions can be a tricky business.

On the one hand, you want to be yourself, not only for the sake of authenticity, but to allow you and the other person to accurately feel out whether or not you have a connection worth pursuing. Acting like someone you’re not for the sake of being initially charming may garner temporary success, but merely postpones the recognition of fundamental, relationship-dissolving differences.

On the other hand, initial encounters are inevitably plagued by an atmosphere of nervousness and awkwardness, wherein small differences between the two participants, which will prove immaterial later on in the relationship, can feel outsized in significance, stymying what might develop into a strong connection.

The best approach when first presenting yourself to another is thus to allow the fundamental pieces of your personality to come to the fore, while minimizing the minor differences between you that might lead either participant to prematurely write the other one off.

Minimizing these small differences involves reflecting more of the other person’s way of being in the world, and has happy effects for both parties. Affinity-building behaviors will make you seem more immediately charming and likable right off the bat. At the same time, by allowing you to better enter the other person’s emotional ecosystem, these gestures help him or her to feel more comfortable, understood, and at ease. The result is a smoother interaction, a more relaxed, harmonious atmosphere in which to get to know each other, and the creation of instant rapport.

People vary in how loud or soft and fast or slow they speak. Quiet and slow talkers can feel overwhelmed and off-put by loud and fast ones, while loud, fast talkers may perceive their more soft, languid-speaking peers as boring. Matching the cadence and volume of your own voice to that of a person you’ve just met can reduce the chance of them making too much of this initial difference, and put them more at ease. You don’t have to match the verve of their voice entirely to where it feels artificial to you (and will come off as artificial to them). But speak a little louder or a little softer than you normally would if you’re talking to someone who speaks loudly or softly.

At the same time, reiterate the vocabulary they use. If he says that such and such is “awesome,” call the things you like “awesome” too. If she says she has a “worry” about “X,” sympathize with her “worry” about X, and share your “worry” about Y.

People feel more affinity for you when looking at you is like looking into a mirror. You can create this effect by reflecting the other person’s body language: if they are resting their right arm on the table, rest your left arm on the table; if they have their left leg sticking out straight, stick your right leg out straight.

You don’t need to change your body’s position just as soon as they change theirs, which will feel too obvious and weird. Wait a bit before you move to mirror their posture.

Clothing goes a long way in whether we feel that someone else is “us” or “not us.” And you do actually want to display these differences; personal style broadcasts signals that help everyone discern who might be “my kind of person,” allowing us to more effectively find and connect with those who are.

At the same time, though, your wardrobe typically incorporates things that convey different aspects of your personality, and a spectrum of messaging, and it’s wise to pick those items that will be most similar to the clothing of the folks you’ll be meeting. For example, I have both cowboy boots and leather work boots in my wardrobe. Both types of footwear reflect my personal style, and I can choose which to wear to an event, based on which will fit best with the dress of the other folks in attendance.

Among the already existent items in your own wardrobe, you might choose a concert t-shirt or button-down, a North Face puffy jacket or pea coat, a cardigan sweater or a henley, depending on which get-up will make the person you’re meeting feel the most kinship and connection.

Don’t Be a Contrarian

Declaring: “I’m not like you!” would be an instant rapport killer. That may seem obvious, but staking out contrary positions essentially does the same thing and yet manifests as a very common conversational tic.

She says, “I think the tacos from the food truck by Western Park are the best in town.” You say, “I don’t like those. The ones from Miguel’s are way better.”

He says, “I love listening to the Joe Rogan podcast.” You say, “Really? I can’t stand that guy.”

He loved some movie; you pan it. She likes some activity; you say it’s your personal nightmare.

You don’t have to completely hide your opinions, but especially when it comes to a first encounter, it’s best not to directly contradict someone else’s. Doing so viscerally contributes to their deciding “He’s not my kind of person,” even though these little differences in taste aren’t likely to be relationship killers in the long run. Not to mention, it shuts down the other person’s side of the conversation.

So instead of responding with “Not me!” to the other person’s takes, just ask him or her to share more about them. “Oh yeah? What is it that you like about X?” This keeps the dialogue rolling, and when they’ve explained their opinion of things, you can add your own in a more positive way: “I’m a big fan of the tacos at Miguel’s. Have you tried them?”

For more helpful tips on making a good first impression, listen to this podcast: